Need a gas cooker but have no gas supply

I am not sure about the terminology, i.e if it's called an electric cooker, burner, stove or something else. So I'll just refer to it as a electric or gas cooker to simplify things.

We don't have a gas supply to our house in the UK as we have moved to a more remote location. We did have a gas supply in our old house and are finding the electric cooker in the new house extremely slow. So I started looking into bottled/cylinder gas, but I am not sure which direction to go in as I have so many options.

Those little single ring gas stoves are really intended for camping use, or emergency use at home (during a power cut). The cylinders for them are very small and don't last long.

Any standard gas hob can be "re-jetted" to take bottled gas rather than mains gas; they often come supplied with a conversion kit for this purpose.

The normal thing to do is have an outside wire enclosure containing two large gas bottles and an auto-switching regulator (so when one bottle runs out, it switches over to the other bottle). The two bottles system means you can use the second while the first is being refilled / replaced.

You'd normally use propane for this rather than butane; butane becomes unuseable around 0C so can't be stored outside.

I don't know if this system is up to modern standards, but it is what my mother has used since before I was born, and she is happy with it.

What she has is a gas stove of this type. (I can't recommend a current brand, hers is made in East Germany). Hers is, however, bigger than the one on the pic looks like. 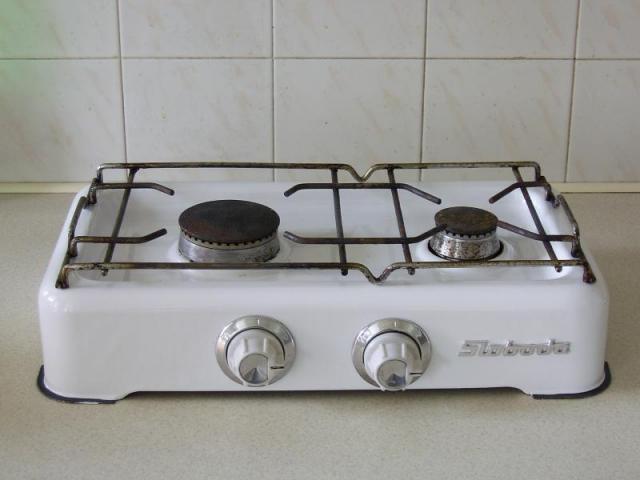 She also has a gas bottle (a mix of propane-butane) sitting in a corner of the kitchen, close to the stove. The bottle is of this type: 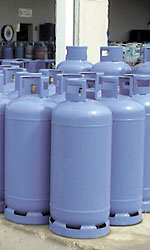 On the bottle, a simple valve is mounted: 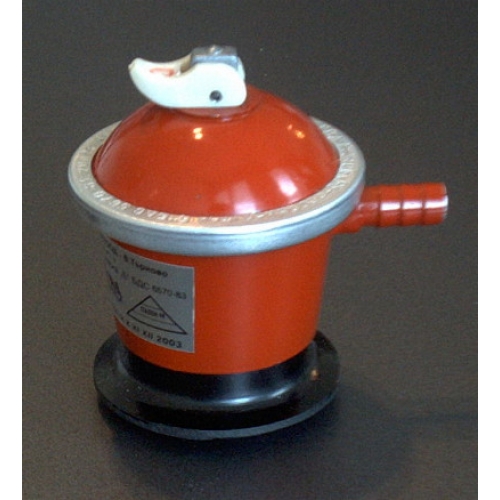 The bottle is connected to the burner with a simple rubber hose, no need for the installation of pipes. I don't know how much gas is there in a bottle, but it lasts for maybe 3 months. We keep a second, full bottle in the basement, so when one bottle is empty, we clamp on the second one and use it. If you don't have a second bottle, you are left without a stove for the 3-4 days the supplier needs to deliver a full one. I agree that the auto-switching regulator Vicky mentioned sounds very convenient, but I don't know how expensive it is or how much space it needs. The nice thing about our setup is that it is simple and low-cost.

The capacity of such a burner is enough to cook a meal for the extended family (maybe up to a 7-8 l pot). I don't know how it fares at amounts above that, e.g. if you want to cook your whole strawberry bed into jam.

As for safety, we always turn off the valve when the burner is not in use. This means that turning on the burner becomes a three-step action (flip valve open, turn knob at burner, ignite gas), but with the bottle sitting next to the burner, it isn't so much additional effort. As long as the bottle itself is OK (and regulated suppliers should be checking them before refilling), this minimizes the possibility of a leak to times when a cook is in the kitchen and would smell the leak before dangerous levels of gas have accumulated.

I would start by looking for a convenient supplier of gas in cylinders of the type rumtscho showed you, and making sure that they can deliver wherever you are. You want to avoid loading heavy, dirty and dangerous explosive gas bottles in your car, assuming it is even legal to do that where you live.

Once you know the type of gas (propane, methane, funny mix...) go to a white goods store and ask for a hob or a hob+stove that can mount the right jets for your gas. If you are the least bit unsure, ask a professional gas fitter. Gas is very friendly when everything is done right, and very nasty when invisible small mistakes are made, like the wrong type of gas hose or the wrong way of attaching the hose to the appliance and the bottle.

Not the answer you're looking for? Browse other questions tagged gas or ask your own question.

26
Induction range vs gas
4
How to simulate an oven when what you actually have is a gas stove?
1
Run gas when outside of home
6
Does using Electric stove vs Gas stove have any difference in food taste?
3
Do you need to pre-heat a gas oven?
2
How to light this type of basic, old fashioned gas-cylinder-powered gas oven?
0
Gas stove burner
3
Visual standard for gas flame levels
2
Why is there a noise and big flame when starting my gas cooker?
2
How do I stop metal-bottomed pots squeaking on my gas hob?