Due to my affinity for baked goods, I decided to try creating key lime pie filling from scratch. I've done so twice now using two recipes. The first of which calls for key lime zest as a primary ingredient. The second of which does not, though a recommended modification of the recipe, which I followed, does call for it.

Timing the process, it took me about 20-25 minutes to grate 3 tsp. of zest from my key limes using a planar grater/zester and a small ceramic bowl. I would like to significantly speed up this process if I can, but the size and texture of key limes makes them difficult to zest for more than a pinch at a time.

Is there a faster way? I was thinking of doing something crazy with my food processor or investing in a proper zester, though I'm not sure how much this would speed things along. There also seem to be rather expensive products like the Spin Zester out there, but they seem of dubious applicability to this problem.

It seems to me, that a quality planar grater is the best solution. The Spin Zester is way too expensive for a home kitchen. I can recommend this fine micro plane grater for zesting: 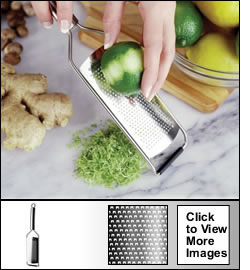 When I need larger amounts of zest, I peel the fruit with a knife as best I can, scrape off the white part, and then use a food processor or finely chop it. This is slower for small amounts, but much faster for large amounts.

I just began zesting key limes and I found a professional zester at Wal-Mart for $ 13.85! It took me about 5 key limes to begin to get the hang of it, but now I can do 80 key limes in about 45 minutes.

The best thing is to practice using no gloves. Be sure to keep the limes cool especially after zesting. This leaves the original lime without a peeling surface but still full of juice and ready to squeeze!

Not the answer you're looking for? Browse other questions tagged pie lime grating or ask your own question.

16
What is seeping out of my key lime pie?
30
Are limes and lime juice more acidic than lemons and lemon juice?
5
In ingredient lists, does “lime” mean the fruit or the chemical?
3
How can I get more lime flavor into my key lime cake recipe?
0
Key Lime Pie Filling - Thins out after pumping
4
How do you stop limes from drying out?
18
How can I tell which limes have the most juice?
56
How do I wash the “pokey” side of a box grater?
0
Post harvest treatment of organic limes vs conventional limes