What makes a chewy brownie?

I've tried many different brownie recipes and most of mine bake to a cake-like consistency. The brownie holy grail for me is crusty top chewy brownies. What can I add/remove/do that will make my brownies chewier?

One of the most important factors in achieving a fudgy, chewy brownie is cooking time. Essentially you should be slightly undercooking the brownies so they don't dry out in the middle.

Use the cooking times given in recipes as a guide only, because each oven will vary. 5-10 minutes before they 'should' be ready, start testing the centre of the brownies with a toothpick or cake tester: unlike a cake, you want a good amount of sticky crumbs on the skewer (but very little liquid batter). Remember that the cooking process will continue even once the brownies are out of the oven.

Another factor that contributes to chewiness is the sugars you use: adding some sticky, dense, dark sugar will help create a fudgy brownie. The brownie recipe I use, which is pretty damn good, uses 1.5 cups of granulated sugar and .5 cup of packed dark brown sugar.

America's Test Kitchen (AKA Cook's Illustrated) took on exactly this issue. They were looking for both that chewy texture and that shiny, crusty, crackly top. Good boxed brownie mixes achieve those qualities, but lack the intense chocolaty taste of homemade. They tried different mixing methods. They tried melting the butter, creaming the butter, and different sweeteners. They tried a pizza stone and they tried an ice bath. Nothing worked until they went to their science editor.

It was the science editor who suggested that their problem was the ratio of saturated vs unsaturated fat. Sure enough, the good boxed brands had almost the reverse ratio of saturated vs unsaturated fat of the recipes they had been working with. So they upped their vegetable oil, and reduced the amount of butter. They also added two egg yolks for their emulsifying ability. I can say from experience that the vegetable oil wants to separate from the rest of the batter until those yolks are added. If you instinctively jump to the idea that more egg will defeat the purpose and make the brownies more cakey, it's the white that does that, not the yolk.

As far as the shiny, crackly top, they found that plain white, granulated cane sugar was the best sweetener for achieving that.

Certainly, overcooking even these brownies will destroy that chewy texture. You want to remove them from the oven while they're still underdone. Carry-over cooking will complete the baking.

The recipe can be found here: Chewy Brownies but it's paywalled. If you don't have a subscription, they do offer a 14 day free trail. You can pretty well suck the marrow out of the site in 14 days, and they will not charge your card if you cancel in that 14 day window.

Here's a picture of mine. Of course, you can't tell from this how chewy they are (very), but you can see the shiny, crackly top. 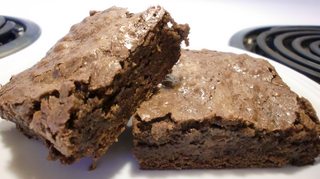 Use REALLY high quality Dutch Process Cocoa. Contrary to what is often seen, oil is not the answer to chewy brownies. Good cocoa, and bake them in a 9x9 pan, not 9x13 (think surface area to volume here). I do not recommend undercooking, in my experience the texture is "off" in undercooked brownies.

Watch them carefully. When the toothpick test is good (it comes out clean), get them out of the oven right away.

Not the answer you're looking for? Browse other questions tagged baking brownies or ask your own question.

3
How do I reverse my cake-like brownies to chewy?
19
Why do my brownies inconsistently end up hard and thin?
6
How can I get my chocolate cake to taste less like a brownie?
7
Brownie Questions
5
Why did my brownie batter separate?
1
Substitute for vegetable oil in brownies
0
Why can boxed brownie mixes use so little "wet" ingredients?

4
How do I make a brownie chip?
6
Can I make white chocolate brownies based on a normal brownie recipe?
6
How to make a sandwich bread with a very soft crust? And what is the ideal temperature to bake sandwich bread?
7
Brownie Questions
6
How can I get my chocolate cake to taste less like a brownie?
2
Multilayered brownie help
3
Brownie with chocolate mousse on top
2
How can I alter this high-protein brownie recipe?
0
Why is my cupcake brownie like?