I have always enjoyed a slice of apple pie... in the morning... afternoon... and after dinner. Or anytime actually. And as such, I had to learn to bake my own apple pie to satisfy my deep affinity with them.

When I bake apple pies, I make sure to use the best apples I can find. I typically always go for Honey Crisp for its sweetness/slight tang and firmness to stand up to the baking. For the longest time, I have been cutting the apple by first peeling the apple, cutting the apple into 4 pieces down the middle and coring each piece. I then cut the apple pieces into slices in the shape of the apple so I get crescent shaped slices.

I have alway had success with my pie and I'm actually quite proud of it. Recently however, I shared a slice with one of my roommates. He enjoyed it but he made a passing comment about how strange it was that I cut the apple in crescent slices(that ungrate... haha jk). That bruised my ego a bit.

So now I want know how other people cut their apples when they bake their apple pie? And has anyone tried the crescent shaped method and a different method and found that one worked better?

I've eaten plenty of apple pies with crescent slices. Nothing wrong with it at all. If you don't have any special tools, it's probably the best way to get slices that are the full length of the apple. It's probably what I'd do if I made a pie tonight.

A lot of people probably slice differently, though. In particular, if you have a corer (which doesn't also slice) you can peel, core, and halve the apple, then cut thin slices perpendicular to where the core was. It's easier to get thin slices this way, since you're making parallel vertical cuts. Of course, it's a pain to core a whole or half apple without a special tool.

Perhaps some people out there, especially if using very large apples, peel, quarter, core, and then slice, getting quarter-circle slices. Some people prefer small pieces; they might use a corer/slicer to get get 8 wedges, then slice those further.

People who make a lot of apple pies might have a device like this peeler/corer/slicer. It does all three simultaneously, rotating the apple to peel it, pulling it across the corer, and slicing in a spiral as the apple rotates and moves horizontally. Theoretically you end up with a peeled, cored apple that's thinly spiral-sliced the whole way through. At that point you can just cut it straight down the middle, and end up with half-circle slices.

I expect your friend was simply used to one of those methods. But any kind of apple pie you can think of is being made out there. Slice them how you like!

Take an unpeeled and un-cored apple, and cut in half down the central core line

Any seed parts will fall out if not desired

On a good variety apple the the core (the actual fruit) is perfectly edible. Especially when cooked it seems the same as the surrounding flesh (false fruit)

Coring and peeling? There is no need to waste perfectly healthy, tasty, and flavoursome parts of the fruit. Just make sure you buy good quality fruit in the first place. Peel and trim bruised fruit, and only core old apples

This method is very fast, and provides a much more interesting slice shape. If you can hang onto the apple without the initial halving you will get the nice five pointed star profile when cut this way (for extra pixie points!) 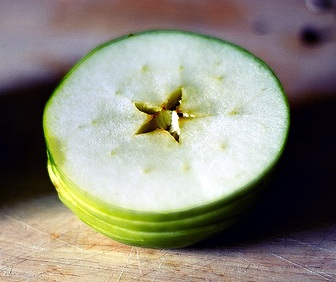 This type of slice also cook more evenly as each slice is the same thickness all the way through, and is therefore much softer to the bite

I peel my apples by hand (with a paring knife), cut them in half, use a melon-baller to pop out the cores and then slice them, cut side down with a mandolin, the thinner the better.

One interesting option if you want the filling to be somewhat denser is to use staggered dice - say, 4 apples cut to 1/2" dice, 1 to 1/4", one to 1/8" or 1/16". This way, voids between the big chunks will be filled well without needing to create a lot of thickened liquid in the filling.

About the coring problem: For baking, just cutting 2 large and 2 small blocks off, leaving a square core (maybe cutting it octagonal if there is too much usable apple left), usually is perfectly adequate :)

Not the answer you're looking for? Browse other questions tagged cutting apple-pie or ask your own question.

5
Why is my apple pie not crispy?
4
Baking with regular skillet vs. cast iron for apple pie
1
Refreezing apple pie
1
Apple pie making…how to add the crumble crust on top of the mound of raw apples?
3
Best apples for apple pie
2
How to make use of old apples?
1
How to cut a cake that was baked in a pie pan?
4
Why did apple filling in the pie turn to mush?
6
What's the best way for inexperienced cook to finely cut cabbage?