What difference would using Rock Sugar make in tea?

I like my tea sweet, and generally add several cubes of white sugar. Teavana sells rock sugar, which it claims is somehow "better" while being vague on what that means. Is it sweeter? Less sweet? Somehow interacts with the tea leaves differently?

Interesting, you're meant to brew it with the leaves, presumably sweetening the whole pot rather than doing it to taste for individuals, which sounds annoying. Is that just marketing or does that have some benefit?

It appears to be brown sugar instead of white sugar. So there will be some flavor difference from less refining (e.g., more molasses remaining)

You could pick up turbinado sugar at the grocery store, which will probably taste just about the same, for much less money.

edit: I should also note that honey makes a good sweetener for tea as well, depending on the type of tea. You could use normal brown sugar as well. Maple sugar (or syrup) goes in some... there are a lot of sweeteners you can use, and most of them you can get fairly cheaply at the grocery store so you can experiment. (Except maple, I suppose, which is just expensive)

In Northern Germany, sugar crystals similar to the style depicted on the linked web page are used for "East Frisian Tea". East Frisian Tea is more a style of tea service than a specific variety of tea, but usually some blend of Indian black teas is used, often Assam and Darjeeling, but some variation from that is possible; the main thing is that it's not an aromatized or fruity tea, but a black tea blend, and tends to be infused with the intention of being slightly bitter.

When serving, rock sugar is placed at the bottom of the cup. Tea is poured over the rock sugar. Then, typically, but not always, a bit of cream is poured on top of that. You don't stir what's in your cup, so you start with a creamy flavor, progress toward a fairly bitter/astringent black tea, and have an increasingly sweet finish. You keep on repeating the process of adding sugar, tea and cream and drinking until you've run out of things to talk about with your friends.

Other answers have mentioned the possibility of different colors of rock sugar, but just to be clear, the question is asking about this brown type of sugar from Teavana: 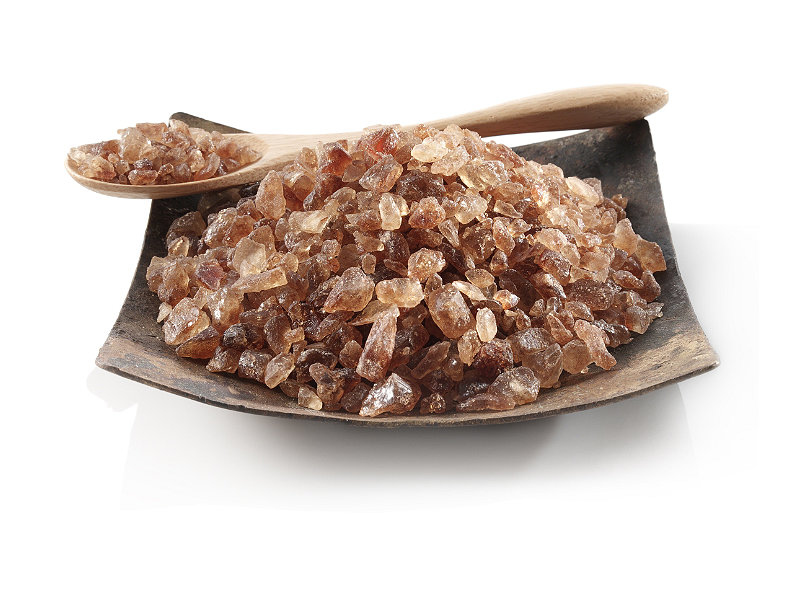 There is also clear ("white") rock sugar (sometimes also known as rock candy or crystal sugar), such as this: 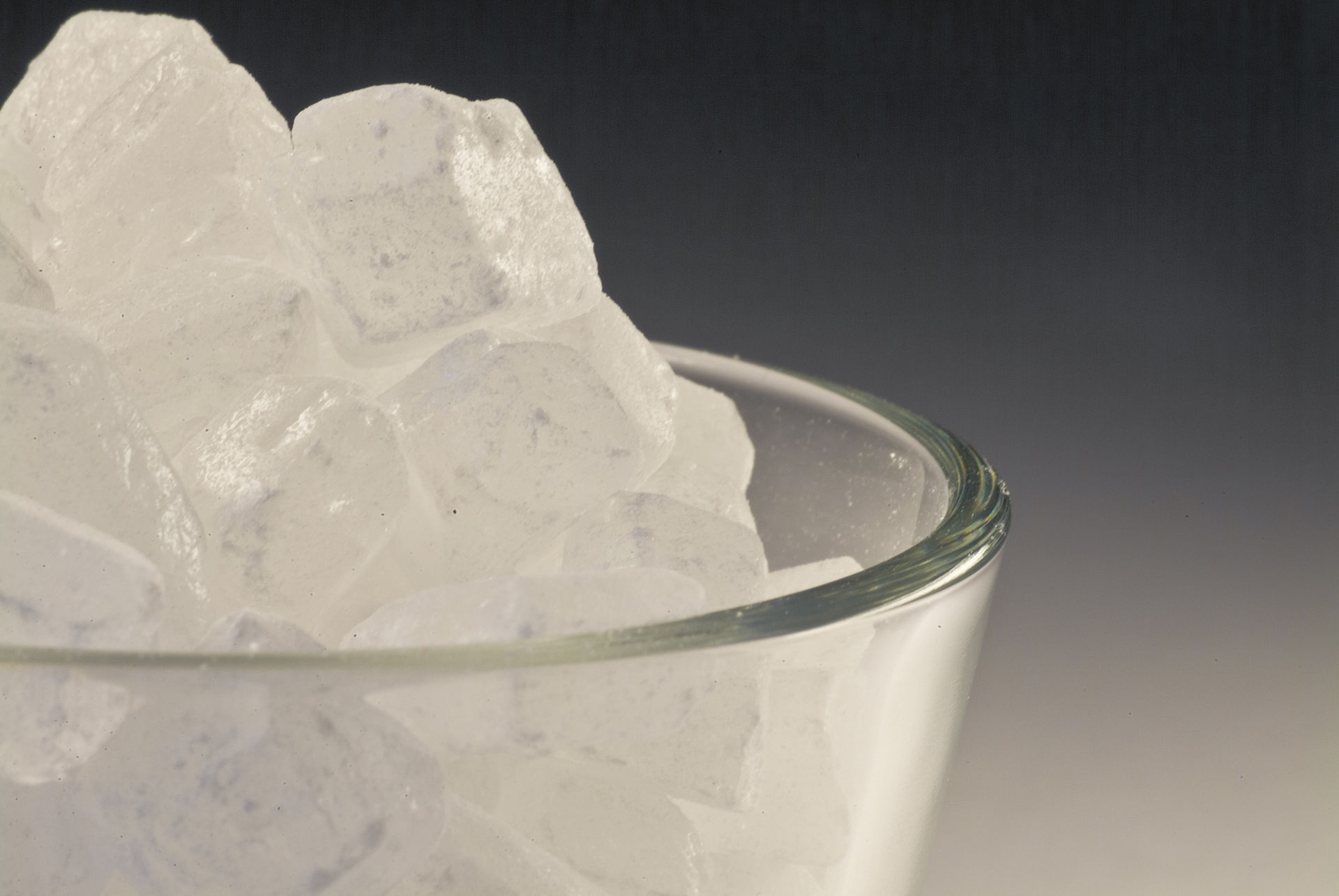 As one other answer mentioned, rock sugar is often manufactured from beet sugar, though this has to do more to do with European sources and traditions than any actual manufacturing requirement.

Regarding flavor, I find Teavana's description to be misleading: "These pure, unprocessed sugar crystals are the best way to enhance the natural sweetness of your tea without changing the flavor." As others have noted, the brown version of rock sugar generally has molasses or slight caramel notes, so it is actually more likely to flavor your tea than more processed sugar.

If anything, in the past I've heard such claims of little flavor alteration associated with white rock sugar. There is an argument to be made that larger irregular crystals allowed to grow slowly for white rock sugar could have fewer impurities than smaller crystals in normal granulated sugar with a lot more surface area to collect unwanted stuff during drying and processing. (To know for sure, you'd need to know a lot about the processing at the particular manufacturing plant.) Also, larger crystals with less surface area will be less susceptible to absorbing "off" flavors from humidity, making large-crystal sugar more shelf-stable and less likely to taste "stale" when stored in less optimal conditions.

My guess is that Teavana appropriated the marketing hype for the "purity" of large-crystal white sugar (which might actually be more pure and have fewer unwanted tastes) and combined it with the marketing hype for "natural" raw sugar that doesn't wash away the molasses and other flavors/colorants during processing. But the two are not the same thing at all.

In any case, rock sugar should provide the same amount of sweetness by weight as normal granulated sugar. Other than longer dissolving time, the only difference may be slightly more non-sucrose flavors for the brown types of rock sugar and slightly less for white rock sugar.

I received this rock sugar with a tea gift set, and to my palate it tastes no different from refined sugar. It does take longer to dissolve, so I don't see how you could brew it with the leaves and get the sweetness you desire. I just finished a cup of tea over a period of about 10 minutes, and there are still tiny rocks sitting undissolved in the base of the cup.

The Teavana German Rock Sugar even tastes different in coffee than regular sugar. I just bought some along with some tea and am still feeling out the fact of whether it is worth the price or not... I will buy it online nextime but my first few tastes (including just popping the rocks in my mouth) I love the stuff. It definately tastes different than other sugars and as long as I can get it cheaper than at Teavana, I will buy more. Teavana uses some pretty tricky marketing techniques as well. The guy even told me it's extracted from the German beet root. I'm not sure this is true though.

I've used rock sugar quite a bit in the past. It does take a bit longer to dissolve, but in a hot mug of tea it's going to be dissolved before you drink it anyway, so I don't consider it to be an issue. I have never put sugar in with the leaves while the tea is brewing.

I bought the German Rock Sugar at Teavana along with my tea. I do prefer my tea with the German rock sugar. I have put it in with the leaves, and in afterward it brews. No difference. If using boiled water (as you should) it completely dissolves in the 3min I steep the tea. I would buy the german rock sugar again but not at Teavana, because of the price.

I bought some of the Belgian natural rock sugar from teavana because they are going out of business and it's "cheap"er with the email discount. They also told me that it was lower on the glycemic scale than cane sugar. I have been looking to confirm that but I'm suspecting that was an outright fabrication. Either way the flavour is not as sharp as regular white small crystal sugar. It's more of a caramely flavour when you put too much in. I'm still trying to figure out exactly how much of the stuff equals my usual double spoon in a large cup.

What's up with all the people commenting who have never tasted the Tevana Beet Rock Sugar? I bought it once. Ran out. Decided not to spend the $ to replenish. I immediately recognized that my tea tasted so much better with the rock sugar that I marched to TEavana to replenish and have ever since.

Our history of rock sugar. Rock sugar is more resistant to humidity. The white was sun bleached more. Clear with white in it. That looks like only 1/2 sun bleached.Rock sugar. A rock could be gave to a child as a reward or treat.Candy. It came in a colored cloth like paper pouch. This pouch was then boiled down for the die in it. To die cloth. So the pouch's were saved.It dissolves much slower in water. But sugar is sugar. Asians use about 1/2 the amount of sugar in things as Americans or Europeans do. It was easy to transport in the pouch's. Up rivers & dirt trails. These were the advantages of rock sugar. Taste no different than other sugar. You could grind it yourself into food. Most of this died out after the Korean war. Things became more modern. It's main advantage would be in traditional cooking. All done the old way. Hard to find rock sugar today. So modern sugar must have the advantage over it. Yours might have something else in it besides sugar for color. Tea leaves were placed in a holder then the hot water poured threw them. So probably less sweet water.

Old post, but still popping up in google. My two cents: I have used Cuban sugar, different types of honey, and rock sugar is still my favorite. While the price is steep, the flavor does make an incredible difference. I am an avid tea drinker and brew tea all day- more than a hobby, it helps me focus, enjoy, and smile more often. I often brew the tea with the rock sugar at the bottom of the infuser, so it actually dissolves as the tea is being made and not when you're about to drink it. Another way I like to use it is to fill up my 32 oz thermos with the sugar at the bottom, let it take its course for a while, then flip the thermos upside down, slowly, so it can sweeten the rest. I use about 4 teaspoons per 32oz, which makes it just right for my taste. I have never tried using the sugar at the bottom of the mug, as I drink little bits at a time (remember, all day).

Like with anything else, there are different types of sweet. Rock sugar, although I buy plenty, I only use for tea, since it's the kind of sweet I enjoy the most on teas. It is cane sugar, just processed differently. If you really want to know the difference, pass by a Teavana and ask them for a small sample (you can order cheaper sugar online). Your mouth will understand. I don't personally oppose tradition, as I enjoy it quite a bit, but I don't mind trying new things and improving older measures. This is our time for us to live, right now, not then or later, so I believe breaking tradition is as important as studying it.

A smaller note: if you use a Teavana tea maker or something to that effect and place the sugar at the bottom with the tea while it brews, and you serve it straight out of it and into the cup, the first cup will be sweet, and the second one will not even be aware there was sugar ever involved. It's only a tiny annoyance that can be quickly fixed.

Rock sugar is beet sugar (rather than cane sugar). It sweetens tea without overwhelming the natural flavor of the tea. Use it as you would use crystallized sugar, including that you stir the sugar into the tea (to get it to dissolve).

lizliz
1
2
Add a comment  |
Highly active question. Earn 10 reputation (not counting the association bonus) in order to answer this question. The reputation requirement helps protect this question from spam and non-answer activity.

Not the answer you're looking for? Browse other questions tagged sugar tea or ask your own question.