Liquid made with cream and penicillium roqueforti?

In a comment on this answer, Wayfaring Stranger mentions something I'd never heard of before:

Incubating a walnut size chunk of blue with some cream for a couple days creates a lovely tasty thick blue liquid. The stuff has a fancy French name, but it's been too many years since I actually saw the recipe.

What is this? How is it used? Obviously cultures of penicillium roqueforti like the original blue cheese are safe when made correctly, but is this safe to make in a home kitchen? Are there any potential pitfalls to be aware of?

I honestly doubt that growing blue mould in cream for a few days will have much effect, but why not try, it won't harm you either.

Why is it not going to work? Mould needs oxygen to grow. When making blue cheese (or generally cheese with "internal" mould), holes are punched through the curd to create air channels to supply the mould with oxygen. A Wikipedia image of Gorgonzola clearly shows how the mould grows around one of these punch holes. You can also see how the mould only grows around other natural cracks in the curd, while there are large solid areas of cheese with no visible sign of mould at all. 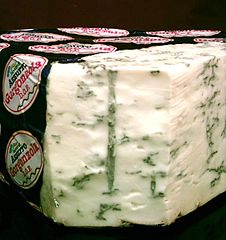 If you don't do this and the curd is without naturals cracks, the mould will only grow on the cheese surface, like for example on a Camembert. 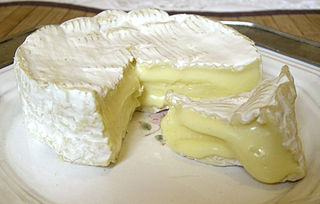 If you soak a piece of blue cheese in cream, some spores may of course dissolve and reach the surface, but they will only be able to grow on the cream's surface. Another problem is that Penicillium roqueforti is not growing particularly fast. Roquefort is for example ripened at least four months under ideal conditions, so just a few days will not allow much growth.

Why is it not going to harm you? Using harmless or perhaps even beneficial moulds like Penicillium roqueforti to prepare food is not only done for the taste, but also for their preserving functions. Or more precisely, different species of mould tend to fight each other, so seeding food with a "good" mould will prevent the growth of "bad" mould. Anyway, cream will get sour and taste bad long before dangerous amounts of mould would grow.

There are hundreds and thousands of penicillia moulds which exist in the world. Mostly, they grow to form green colonies.

The ones which are used to give flavour to cheese generally grow to give blue colonies when cultured.

Those which grow under culture to give blue colonies with white edges are not useful for antibiotic production or flavour properties.

The name? The moulds that work only have names because they have been used to produce commercial products. Those which produce blue colonies are often used for cheese making. They are named because people use the moulds habitually for cheese production - pick your name with your cheese.

Safety concerns - if the "starter culture" comes from an acknowledged safe source, an approved food cheese, you're down to considering the possibilities from associated organisms, like Listeria. You need to think about controlling the "external aspects" of the preparation.

When mould grows on your food, it often gives the food a flavour you don't like.

Mostly, that flavour is making a statement. The mould is saying "this is my food, not yours". You could eat it, despite the "off flavour" - but people avoid taking chances -if it comes down to "can I eat this and live happily", they are mostly wrong.

People don't want to take that chance - and the mould is allowed to eat that food, not the huming beans. You could mainly still eat the food, the flavour is "off-putting".

NOW those of us with edificated palates are quite used to the flavors that penicillin moulds can give to cheese. If you have "cheese moulds" you could get them to grow on anything coming from a dairy - with the result that you have something that tastes of "blue cheese", as opposed to generally "mouldy".

Don't let that tiny fungal organism tell you what to do because it can influence your odoriforous sensibilities ...

Not the answer you're looking for? Browse other questions tagged cheese cream or ask your own question.

11
Can I eat cheese which has been "infected" with blue cheese mold?

9
How is long-lasting whipped cream made?
6
Can coconut cream be made from coconut flour?
3
Can clotted cream be made with UHT cream?
5
making cream with almond milk and fat
1
How to fully incorporate cream cheese with pumpkin puree?
1
Sauce made from butter and cream flakes/curdles
2
Fresh cream versus butter and buttermilk
2
Is industrially produced cream made with a gelatine sieve?
0
Yogurt made with heavy cream
8
What is the difference between cream cheese and sour cream?