Some tahini tastes very salty, other tahini does not. Why?

I have bought several jars of tahini from different companies lately. All labels say, that they contain 100% hulled sesame seeds with no preservatives or artifical flavours added.

Some of the jars contained very salty tahini. At first, I even thought, the salty ones were contaminated with some inedible chemical. But then a friend from the Middle East told me, that he sees them as the original flavour and he did not like the unsalty ones, that he called "Australian tahini".

An example of the unsalty tahini is Mayver's Tahini Hulled, for the salty ones I did not find a brand, as they are just bottled by Australian local wholesalers for Mediterannean food.

What makes the tahinis so different? Do they - as I think - use different chemicals for hulling? Is the salt washed out of the tahini in the unsalty brands, as my friend thinks?

EDIT: One thing, I noticed: The salty tahini is runnier.

2nd EDIT: After reading @Jefromi's comment, I've looked at the ingredients. Salt is not listed and I doubt, that I would taste 1/1000th of salt in the tahini. Surprisingly the less salty tahini contains 11 times more sodium than the salty one, which makes me wonder, if the salty tastes comes from another salt than NaCl.

Here are the contents of the tahinis per 100g (unsalty first - Melissa Tahini, salty second): 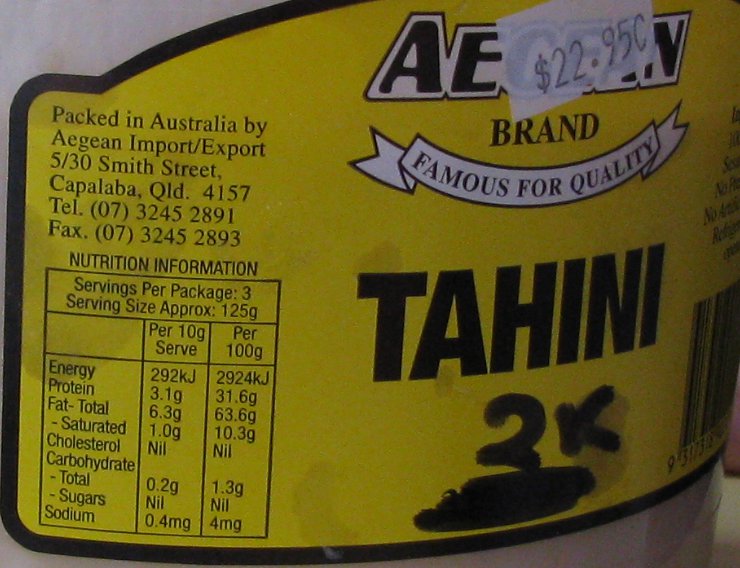 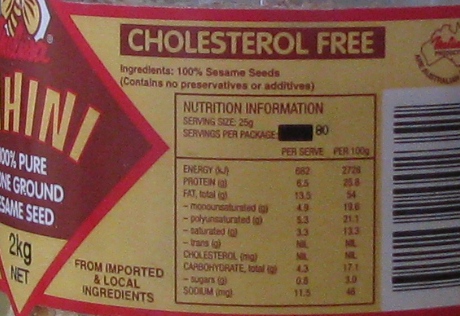 The numbers are so different, I wonder, if they are correct.

Just toured 17 tahini factories in Palestine. The traditional process soaks the sesame seeds in salt water, first to soften the hull for de-hulling, again to separate the hulls from the seeds, and finally to obtain the desired flavor. The seeds are rinsed in fresh water prior to drying and roasting. Alternate de-hulling processes avoid the initial salt water soak, but retain the salt water soak after de-hulling and prior to rinsing and roasting to obtain the desired flavor.

I would think that the water being used for the hulling process has salt in it. The label is only going to list added items for the production of the finished product. Of course that depends on where you live and the food laws that govern your area.

If the manufacturer is purchasing seeds pre-hulled then he's not going to be listing any added salt because as far as he's concerned he's just putting sesame seeds into a grinder.

The fact that he doesn't need to ADD any additional salt as shown from the label shows that his supply is coming to him in a salty state already. Which is why he's probably using them because he's saving on the cost of salt in the recipe.

Maybe try to buy 'original' middle-eastern Tahini actually made in an Arab country on Israel in Arab/Israeli owned stores or those catering to those crowds. Here in Israel if you don't add salt while making the Tehina it's doesn't taste good enough...

Not the answer you're looking for? Browse other questions tagged middle-eastern-cuisine tahini or ask your own question.

5
How long does tahini last past expiration date?