How to create a gummy candy cake?

However, I don't know what to use as a frame to stick the candy and also what to glue them with!

Is there anyway to make/(buy) some kind of edible frame? I'm ok with plastic or glass but if it could be edible it would turn out awesome! :) Furthermore, do you have any ideas on what to glue the candy? 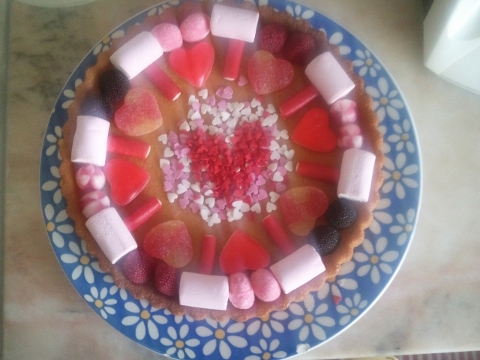 This is what I ended up doing. The base is a sponge flan cake, which I bought in the supermarket. Regarding the glue, I was presented with the options of a pure glucose syrup and a shinning glucose gel. I chose the latter, since I was told it was commonly used to stick crystallised fruits in cakes and that sort of stuff :)

Thank you all for the tips and the inspiration. She loved it ;)

For the frame, I would suggest baking a cake, brownies, gingerbread or even cookie dough in a baking sheet (so it's one big, quite thin piece). But put the temperature of the oven lower than if you would use a regular baking mold. You could also use a piece of styrofoam/polystyrene*, covered with tin foil. Then you can use tooth picks to hold everything in place. To cover the tin foil, use sour strips, marshmallows...

As glue you can use chocolate or caramel if it should sit quite steady. You can also use edible glue (this is often used to glue pieces of fondant to cupcakes). If you present it horizontally, you can use a lot (syrup, honey, jello, icing, even a thick pudding...). I think you could even melt some candy and use it as glue. I have no idea however how strong this would be.

*) I'm not sure this is the correct English term. To be clear, I mean this.

I've seen this done before on TV, but it would be quite a feat.

As for the glue, caramel would be best as it would set hard and even when softened could still probably be held up verticly (if that's what you are planning). However you would have to be careful when making the caramel not to burn yourself. Also you would have to add a decrystalizing substance such as corn syrup or glucose syrup as with the continual dunking of the candies it could cause the syrup to crystallize inadvertently.

Another option for the glue would be buttercream frosting, however this would not set hard so it would have to sit flat or the candies may fall off, although it would be tastier. The only problem I can envisage is that the colors in the candy may run but if you pack them closely together then you wouldn't see it anyway.

For the base I was thinking a large cookie, preferably chewy rather than crisp as it will be less likely to crack. Another option is nougat, I can see that working but you'd have to get a smaller amount then roll it out.

For the border the best thing I can come up with is marshmallow ropes or you could just use more candy in a frame pattern (think jellybeans).

Hope this helps and gives you some inspiration!

For a base, you could create Sugar Glass.

Royal Icing is used as the mortar to glue gingerbread houses together.

In fact, Gingerbread would make a great base too. Maybe you should simply research gingerbread houses.

Not the answer you're looking for? Browse other questions tagged candy decorating or ask your own question.