What can I use to strain gritty bloody mary mix?

I like Zing Zang bloody mary mix, but it's very gritty with seasoning. I like to pour it into a strainer to filter out the grit, but the mix is so thick that it takes forever to strain. Not only that, it doesn't get all the grit. A strainer with smaller holes would help keep out more grit, but the thickness of the mix would make it impossible.

I've thought of adding a cup of water to the mix to thin it out, but then I'd have to boil out the water and I don't know how to measure how much water I've boiled out nor do I know what effect boiling would have on the flavor of the bloody mary.

Update: It's looking like my only option so far is to get a high-grade blender that I can use to pulverize a entire bottle of premade mix.

Line a salad spinner with cheese cloth or another lightweight cloth. Fill and spin.

Perhaps using something like fine grade cheesecloth would let the liquid flow through easily enough but still catch a reasonable amount of the solid particles?

Pour the mix in something like a coffee grinder and grind it into a fine powder.

I didn't realize that your mix was liquid. For liquid, go for something like a Vitamix or such if you want assured pulverized results.

Well, I finally found the PERFECT solution to my dilemma. Here it is: 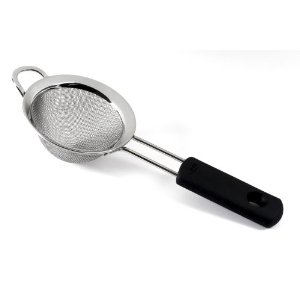 I fill it as full as I can with the mix (it's liquid and comes in a bottle) and then tap it downward on top of my glass. The combination of gravity and momentum caues the mix to easily make it through the mesh of the strainer as soon as it encounters the shock from making contact with the glass. Doing it this way lets me enjoy a smooth, grit-free bloody mary!

Not the answer you're looking for? Browse other questions tagged equipment drinks or ask your own question.

4
What's an easy to use juicer that juices oranges as well as other fruit?
12
Can I use a tagine on a glass cooktop, and do I need a heat diffuser?
11
Does the type of strainer built in a teapot matter?
4
How to reduce the bitterness of tonic water in a non-alcoholic citrus drink?
13
How should I clean my metal mesh tea strainer?
4
Why does my horchata have too much sediment?
1
What is "Food Grade" Stainless-Steel or Aluminum
4
Is there a water kettle or dispenser that can keep the water lukewarm?
7
How fine is "Fine Mesh" for removing lumps from custards?