How to thin chocolate for dipping

How do you make chocolate thin enough to dip strawberries?

Melt it. I'm not trying to be funny here -- you should have no problem dipping strawberries or pretty much anything else (that's solid) in melted chocolate. When candy makers coat things in chocolate, that's all they're using -- they don't add anything to make the chocolate thinner. If you're really having trouble in this respect, then perhaps your chocolate isn't fully melted, or perhaps it's something other than real chocolate.

If you want the chocolate to be "tempered" when it hardens/dries/crystalizes, you're going to have to read up on tempering and be pretty careful with the temperature (but you'll end up with a superior product if you do).

If I make it thin enough to dip (with butter) will that affect allowing it to set-up and harden?

Yes, that will definitely affect the way the chocolate sets up. When chocolate hardens, the cocoa butter contained in the chocolate forms crystals. The crystals can actually take several different forms, and only one of those forms makes for the best appearance and hardness. That's why you temper chocolate, btw. Adding other substances, particularly another fat, will affect or prevent that crystallization process.

Caleb has great answer that pretty much covers it.

The only thing I would add is this: If you want to lower the melting point of your chocolate (or keep it liquid longer), I add cream.

The cream stops it from solidifying quickly, which is great if you have fondue set which is warmed with a candle. 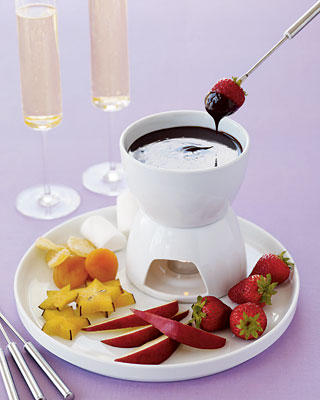 It also doesn't affect the flavour (much).

Be careful though, adding too much can stop it from solidifying at all.

adding just a little melted wax works fine for me, and helps it set up when it cools. I do this particularly for dark chocolate, which is really too thick for dipping.

Not the answer you're looking for? Browse other questions tagged chocolate melting-chocolate or ask your own question.