How can I create steam in a normal oven to promote bread oven spring?

Oven spring and a crisp crust on bread are largely due to high heat and high humidity. Commercial bakery ovens have steam injectors. How can I replicate this high humidity environment in my home oven? I've tried spritzing and ice cubes and neither really work. Pouring hot water in a hot pan is better but is still severely lacking.

Is there a way the home baker can replicate with without laying out a lot of money for a commercial oven?

Ok, I'll play along. ;) The moist, hot environment improves oven spring by transferring heat more rapidly to the dough (moist air is more thermally conductive than dry air), keeping the dough surface from drying out and getting stiff. It improves crust quality by gelatinizing the starches on the surface of the dough, causing them to brown better, and form a more distinct "crust", rather than just a skin of browner bread.

To get more steam in your oven, in addition to the simple methods you noted, spritzing and pans of hot water, you can:

In addition to getting more steam in, you can improve the crust and oven spring by using delayed or cold fermentation, which creates more sugars (better browning), and more extensible dough (better oven spring).

I have 3 kg of stainless steel screws in a rack on the lowest level of the oven. The screws are in the oven while preheating. After 1 hour of preheating, I put the bread on my pizza stone one level above the screws and use a syringe in order to squirt 60 ml of water directly onto the screaming hot screws. Needs a bit of caution in order to not burn yourself, and you need to hurry a bit but results in excellent oven spring. 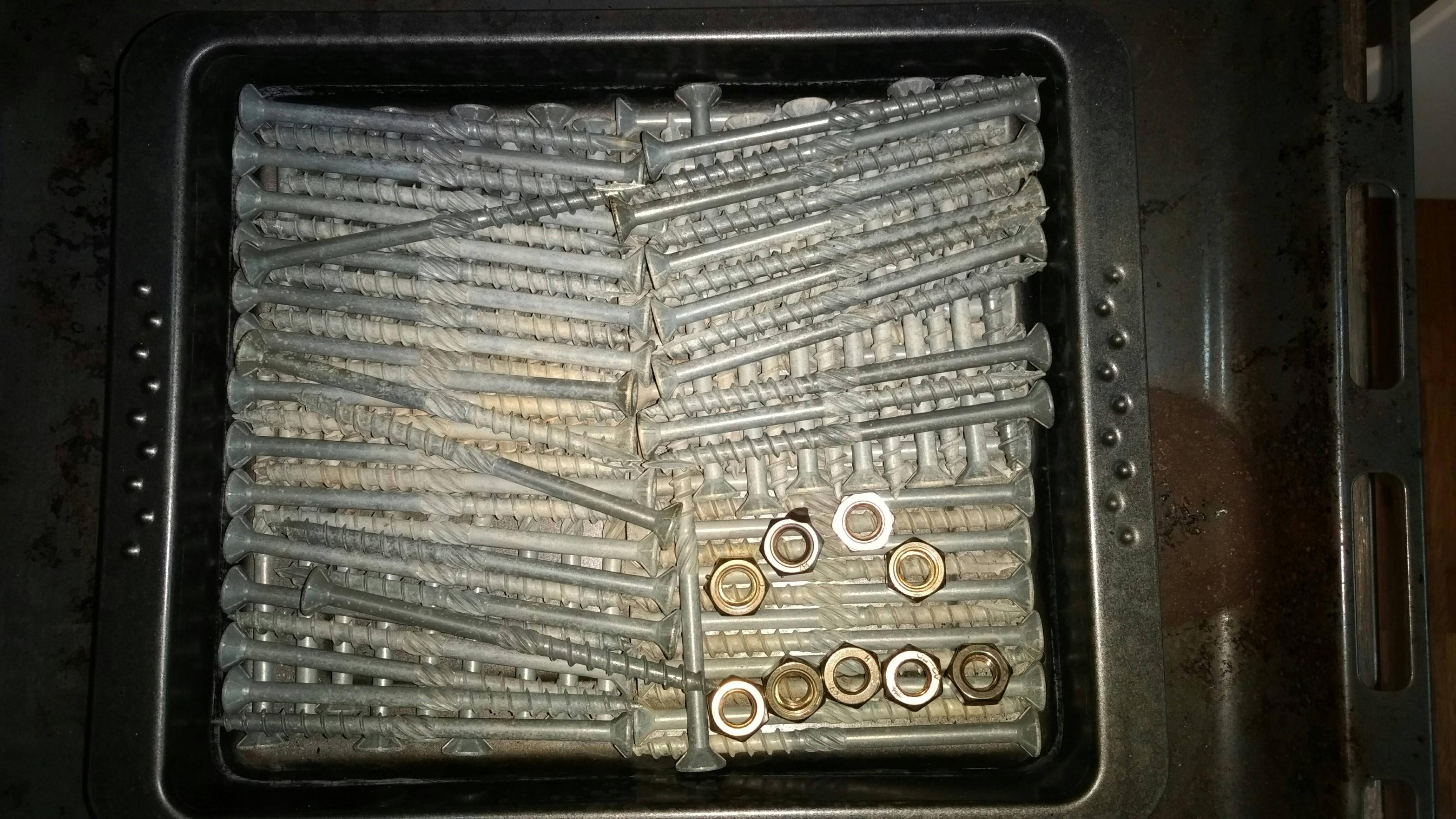 The screws have a rather large surface and because of their weight they keep their temperature good enough so that the 60 ml of water turn into steam immediately.

After 10 minutes of baking, you simply open the oven door and release the steam. Much easier than having to fiddle around with a bowl of boiling water when you need no steam anymore.

And for a good crunch, put a wooden spoon between oven door and its frame the last 5 minutes of baking. This will let the remaining humidity pass out of the oven while keeping the temperature still high.

Edit: There's also a kitchen gadget that looks far nicer than my homegrown solution: the Schwadomat.

Edit2: I just want to note that this is not my invention but was taken from http://schellikocht.de/post/view/schwaden-im-haushaltsofen-die-alusch-methode

The other answers are excellent. I just want to say, be very careful adding water/ice to your oven. You can get steam burns very quickly, warp the oven sides and bottom, crack or break the glass in the door. I use a "la cloche", but care also needs to be taken. They are subject to thermal shock, and removing a very hot cover that has a small handle can be a hazard. In the past I ran a couple feet of copper tubing into the bottom of the oven, and just after placing the dough in the oven, I used a baster to inject water into the cool end of the tubing that came through the top edge of the door. This can also burn.

I use the method described in the Tartine cookbooks. I soak 3 dish towels in water and put them in a cookie sheet. As I preheat the oven to 500 degrees they release a lot of steam. And during the first 15 minutes of baking I keep them in the oven. Sometimes adding water. After 15 minutes take them out. This has worked better for me then the spray bottle on the side of the oven, or dumping water into a hot pan. I've known people to break baking stones and other ceramics with spray bottles. My oven leaks as well but the dish towels keep a nice steady flow going.

To effectively use steam for baking bread, one needs to understand the related physics. One cannot guess, as much of what happens defies intuition, and guessing can easily be off by orders of magnitude.

First, prepare a list of relevant questions: How much energy does it take to melt ice, raise the temperature of water, or turn water into steam? What happens to that energy when steam condenses back to water? What is the volume of steam produced by a given quantity of water, and how does that compare to the volume of one's oven? How much heat energy can be stored by a given mass of metal or stones, and how does that compare to the energy required to heat a comparable mass of water?

If you are not absolutely sure of the answers to these questions (as sure as our predecessors were that the first atomic test wouldn't ignite the atmosphere) then begin your research with a period of peaceful meditation, ridding your mind of preconceptions. Compared to science, cooking is more prone to accepting authority and propagating group think, which can often be wrong. Learn peaceful resistance to ideas propagated by authority. One has spent a lifetime observing people spritzing ovens with a plant mister, little more than genuflection. Rid one's mind of the preconception that this works.

The idea of using ample steam at home was popularized by the Bouchon Bakery cookbook, though it can be found in earlier professional sources. 350g of water will produce enough steam to fill a home oven or an outdoor ceramic barbecue cooker several times over. In contrast, a few spritzes from a spray bottle will be 10g of water if one is lucky.

It takes 80 calories to thaw a gram of ice, 100 calories to bring that gram to the boiling point, and a whopping 540 calories to then turn that gram of water to steam. By weight, steel holds about 13% as much heat energy as water. These numbers explain why one needs so much metal to boil the water, and why it hardly matters whether the water starts out as ice or hot water.

For example, to turn 350g of cold water into steam, using metal heated to 450 F (132 C above boiling) takes about 28 pounds of metal. To turn ice into steam (giving one a slower fuse) takes about 32 pounds of metal. I accomplish this by filling a giant cast iron skillet with two spools of stainless steel chain. Indoors, I quickly but carefully pour water from a metal hiking water bottle, wearing gloves and standing back. Outdoors in a Komodo Kamado ceramic barbecue cooker, I use a slab of ice frozen for this purpose, to buy extra time setting up.

What does the steam do? It isn't simply keeping the crust damp, or one would far more easily spritz the dough. (In grade school a teacher tried to tell us that candle wax slowed down the burning wick; similar skepticism is called for here.) The dough is the only thing in the oven cold enough to condense steam back to water. The energy used to turn water to steam is delivered to the bread as the steam turns back to water. Physics abounds in conservation principles, and this is one: The energy has to go somewhere. As a thought experiment, imagine bashing the bread with a baseball bat, with all your force. Then imagine spritzing with a plant mister. Trust your intuition; which is more force? As a second thought experiment, imagine spritzing your bare hand and sticking it into the hot oven for a few seconds. Now imagine sticking in your bare hand as you turn 350g of water into steam. In which scenario do you then imagine a visit to the emergency room?

I put a cup of hot water into a shallow pan in the preheated oven at the same time that I put the bread dough in. (The bread is on a pizza stone on one rack, and the pan is on a rack below that, and both the stone and the pan are in the oven during the preheat.) This is working great. Wear an oven mitt when you pour the water, because it boils when it hits the hot pan.

I have very hard water and am thinking of using a sacrificial foil pan for this, because scale is accumulating on the broiler pan I've been using.

I have had success using a tightly foiled 600 pan as a larger scaled dutch oven, just put what ever style baking pan you are using, loaf pan, sheet tray etc, inside and seal up for 5-15 minutes depending on what you are baking...gives the loaf a nice steam glazed crust like a dutch oven would.

OK. I am late to this game but I'll add one more thing.

Generally speaking I will just use a spritzer bottle to moisten my baking bread. It makes the crust more cheweyer (is that a word?).

I think if you're going to put water in a shallow pan, it's better to boil the water on the stove top first. Otherwise the pan of water will rob heat from the oven.

The way I really like, because it's kind of dramatic, is to take a ladle full of water and to simply splash it against the side of the oven and then slam the door shut. Instant steam. You have to close the door quickly or all that steam will end up in your face.

You have to be careful though. If you splash any water on the light bulb covers or the glass in the oven door, they will shatter. So don't go to wild with the splashing.

After destroying my oven lights and door window, I've mostly settled for the spritzer bottle.

2
How to build steam in the oven for getting an oven spring?
5
How to reduce cracking and increase browning in sourdough loaves?
9
What's the difference in baking bread in a loaf pan vs. in a Dutch oven?
9
Why baste bread with cornstarch?
9
Tiny beads/flecks of uncooked dough all through my bread
3
My bread cuts doesn't expand the way I like
1
Making bread dough in the bread maker and baking it in the oven
2
Oven Spring when first stage of recipe includes a ten hour first rise

16
What effect do different slash patterns have on bread oven spring?
2
How to slash bread to let steam out
0
*Cannot* get that "Oven Spring"
3
Sourdough Breadmaking: Adding Water to Dutch Oven to create more steam?
3
How to create Yellow Bread
5
Replicating the thin, soft crust of Portuguese Sweet Bread
3
How does water behave in Dutch oven baking?
4
What are the safety and warranty implications of steaming bread in a domestic oven?
4
Bread dough flattens during final proof & almost no oven spring