Why stretch and fold vs traditional kneading of bread dough?

Many recent recipes I'm seeing for bread, this one for example, are using a strech and fold technique rather than a traditional knead. Whats the advantage here? It sure seems to work, but I'm not sure why it works well with so much less work.

The purpose of all kneading techniques is the same: as @rumtscho wrote, to stretch and align strands of gluten.

The traditional kneading method is to fold the mass of dough on itself, press it together with the palm of the hand, turn, and repeat.

With very high hydration doughs this is impossible because the dough will hopelessly adhere to the hands. The technique is, therefore, modified to reduce hand contact with the dough as much as possible.

A dough scraper is used to gather and fold the dough which is laid over on itself instead of being pressed. The result is the same as normal kneading but only the fingertips come in contact with the dough. After just a few turns the gluten sheets will align and the dough will still be tender but much less sticky.

As for why it seems more effective I can only conjecture. Gluten forms in the presence of water. Higher hydration doughs allow for faster gluten development. It is not that the folding is more effective but that kneading very wet doughs progresses faster.

First of all, a traditional knead is stretch-and-fold. I don't know what you were taught, but the technique my grandma taught me is:

While this uses less force than the video you linked, and makes smaller folds, it is still folding.

Second, you asked why. This being dough, it is all about gluten.

What you want to achieve is to unfold the proteins forming the gluten and orient them in the same direction, making them parallel to each other and creating lots of end-to-end bonds (as opposed to cross bonds). The nice side effect is that you aerate the dough, trapping miniature air bubbles into it. This results in a fine, even crumb.

There is a beautiful illustration of this in On Food and Cooking. One look at it, and you know why you should stretch and fold. 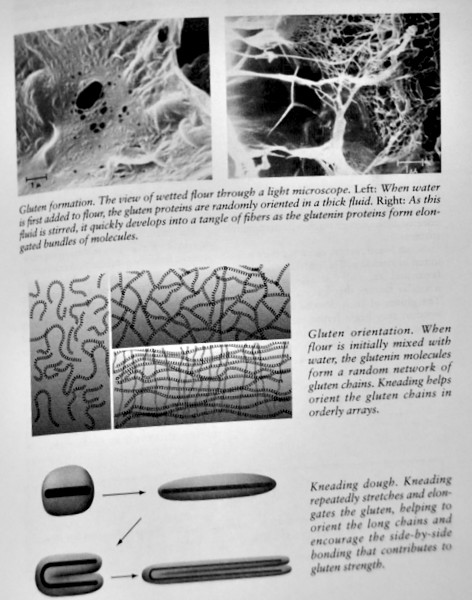 Stretch-and-fold often works better with less effort because it is done periodically (as in the recipe linked in the question, where you do a stretch-and-fold every 45 minutes over a few hours).

Compare this to traditional kneading, where you mix the dough and then pound, stretch, and fold for 5-15 minutes immediately. The gluten has barely been hydrated and it's only beginning to form networks. That's why a lot of recipes recommend an autolyze strategy, where you wait at least 15 minutes after mixing the liquid before kneading. By doing so, you allow the gluten to hydrate more fully, and you generally cut your kneading time in half (or even less).

Periodic stretch-and-folds just act like repeated versions of this autolyze strategy. In most bread recipes, you can generally get away with avoiding kneading altogether -- just mix until all the ingredients are evenly distributed and there's no dry flour. Then, just do 2-4 stretch-and-folds spread out during the first rise. The required number will depend on the type of dough.

Stretch-and-folds actually are a great way to monitor your dough during the first rise too. You can periodically check the texture and make sure it's actually developing enough elasticity -- if not, add in another stretch-and-fold at some point. If the dough is getting too strong (sometimes if the gluten network gets too tight, it can actually hold back the final proof and oven spring), do fewer.

The "stretch then wait" strategy is also similar to the "bench rest" often done before final shaping. Again, many recipes recommend doing a few stretches and preshaping maneuvers after the first rise, then letting your dough rest for 10-20 minutes before doing the final shaping. Essentially, you're doing a stretch-and-fold of the gluten, then letting it "relax," and then stretching it again once even more connections have formed. If you're not doing that before final shaping, you're probably not getting the highest rise you could. Doing it periodically over the first rise will add a huge amount of extra strength to the dough -- generally much more than you'd get even with an extensive initial knead.

One other technical note: initial kneading (and particularly mechanical mixing) introduces oxygen into the dough, which will actually contribute to the destruction of some flavor components in the final bread. It's a relatively minor effect, but substituting stretch-and-fold maneuvers instead of a long knead will introduce less oxygen into the dough initially, which can make a slight flavor improvement on the final loaf.

As other answers have mentioned, with really sticky high-hydration doughs, stretch-and-folds are often the only way to "knead" the dough. But there's really no reason why not to do stretch-and-folds with most bread doughs during the first rise. I frequently do this rather than kneading a lot at the outset (which, frankly, isn't really efficient), particularly with tough heavy doughs like whole-grain or multigrain breads.

One aspect that hasn't been mentioned in the other answers is that traditional kneading would be rather counterproductive when working with whole wheat flour that contains bran flakes. In that case, kneading would actually hinder the development of gluten strings, as:

The bran flakes and germ in whole wheat flour act like tiny little razor blades that shred these strands, inhibiting gluten development. The more whole wheat flour you use the more bran and germ there is in the dough and the more the gluten gets shredded.

Difference between mixing in Spiral mixer and S&F is not that the dough is wet and that it can not be mixed. There is technique called double hydration where you first use 50-60% ish of the whole amount of liquid and then you add the remaining amount of water when gluten is developed. Now if we are talking kitchen aid and stuff, that is a different ball game. Kitchen aid sucks at mixing bread dough. So I would go with hand mixing anyway. In professional mixers have 2 settings, Fast and Slow, You usually mix 5 min on slow and 3-4 min on fast and you do series of folds after that,

Artisanal bakers only mix at 1st speed for 15 min or so to mimic hand mixing.

The real reason is the faster you mix the more oxidized your dough gets and the more flavor you loose.

And the reason why tartine like books talk about S&F is because they know that most people don't have mixers and the ones who has a mixer have kitchen aid type mixer. And it is a pain to develop wet dough in those guys even with the double hydration method.

All this info is for regular 80ish hydro breads. This info is not valid if we talk about rich doughs like brioche or panettone since no one cares about oxidation of rich breads.

The short answer is that it is impossible to knead dough with high hydration such as the 80% for that baguette recipe because it is simply too soft and sticky. It would stick to your hands and everything, and if you added enough flour to make it less sticky, it would not be high hydration dough any more.

With "stretch and fold" you can quickly grab and pull the dough and once you learn the technique, you don't handle it long enough to stick, and can do most of the work with a bench scraper or other implement that the dough won't stick to.

24
Kneading bread with arthritic hands-any tips?
7
Baking 'Master' Recipes
5
Can dough be knead with a rolling pin?
6
When does gluten start to develop in pie crust or biscuits?
3
When is it best to do stretch and fold versus mechanical kneading?
0
kneading vs. stretch and fold with pizza