Does tiramisu firm up in the fridge?

I am making my first tiramisu, using this recipe from Gourmet (with high ratings on Epicurious). My mascarpone mixture looks terribly soft to me.

As per recipe, I foamed 4 yolks with 80 ml sherry (I had no Marsala) and 95 g sugar at 55°C. The yolks were from recently bought M-sized eggs, there were no L-size in the supermarket. The volume increased a lot, but the foam itself was runny. I mixed in the 450 g mascarpone (the egg mass was still warmish), and it seemed to dissolve (I hope I didn't melt it). The result was still foamy and runny. Then I folded in the 240 g whipped cream. The final consistency is similar to egg whites beaten to stiff peaks. It is a foam, and not runny, but very aerated, and I suspect that, if left on a heap (instead of a bowl), it will flow flat over time. It is very unlike the cream layer in tiramisu I've had before.

Is this normal? Will the cream harden in the fridge? Will the ladyfingers soak up some moisture? (They are coffee-dipped in this recipe). Or should I put in some gelatine to make sure it will keep shape? Or some other thickener? I have xanthan, but don't know how to incorporate it, the mass won't survive a mixer on full speed, and it will clump if not perfectly dispersed.

Your recipe doesn't specify 55°C, and I'd be surprised if 5–8 minutes over barely simmering water only gets that hot. Indeed, checking for sources:

In summary, I think you should have cooked it hotter.

I doubt it is going to firm much in the fridge, hopefully it is stable enough to not further liquify.

I think you could have got away with the 55°C if you had let the yolks cool down before adding the cheese. I usually heat the yolks+sugar in a bain-marie, rather than directly; I never really measured the temperature, but I doubt it would be much higher than that.

I think the further addition of cream probably did more harm than good... next time put only mascarpone, as that thickens the compound a lot.

If the ladyfingers were not too soggy they will definitely soak up some liquid, especially if you leave the tiramisu in the fridge overnight, which has also the benefit of enhancing its flavour.

In any case, don't add gelatine! It will definitely ruin the texture.

I'd rather put the tiramisu for 10-15 minutes in the freezer if it is really runny, but I suspect you will not need it. And even if it is a bit runny you can get away by serving it in small containers so that the ladyfingers will be tight and won't float around.

I don't think there is any thing wrong with what you've made. Tiramisu is a relatively recent dessert (forget about the 'Tuscan trifle' which did not even include mascarpone) created at Harry's Bar in Venice. As such there are many variations: some drier, some boozier, some creamier and some wetter and your recipe may just produce a wetter variety.

Take in mind that it doesn't need to necessarily have a thick, almost pipe-able texture as it (I assume unless you've decided not to) will only be spread in a gratin dish so it's ok if it spreads out a bit. In any case it will thicken a bit as it chills as the mascarpone starts to set in the fridge likewise will the cream and to a much lesser extent the egg yolks.

I do think though that they should have been heated more as at 55C they won't have started to cook at all, for next time perhaps try heating them to around 65-70C to form a true cooked 'sabayon' (or I suppose if it's Italian 'zabione'!). If you really want to thicken it at this stage there's not a lot you can do without deflating the mixture although you could perhaps stick in a few unsmoked or soaked very scarcely lady fingers to soak up the excess liquid. Other than that there's very little you can do that wouldn't ruin the texture so I wouldn't try corn starch or even gelatin.

The mixture does indeed set in the fridge. It remains airier than the average tiramisu I've eaten (but I don't know what commercial tiramisu contains, probably not a foam based on raw yolks), but it is firm enough to hold its shape when served. If a piece is forgotten outside overnight, it becomes softer again and runs slightly, but properly stored, it is really very good. Still, I will make a firmer foam next time (by using a higher temp for beating).

Here is a piece from the tiramisu, as you see, it supports its own weight. 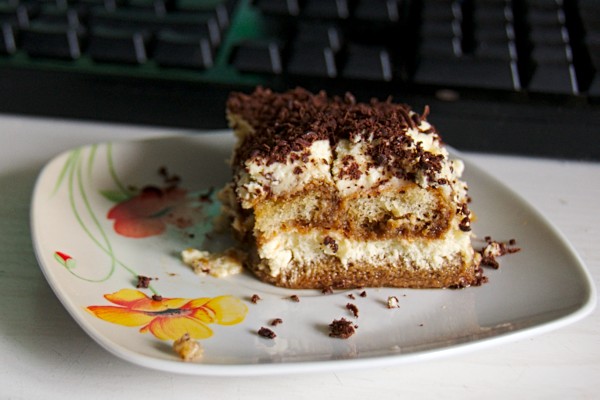 Not the answer you're looking for? Browse other questions tagged baking eggs italian-cuisine foam yolk or ask your own question.

14
Perfect Hollandaise every time using a blender/food processor?
2
Mousseline sauce, use the white or the yolk of the egg?
9
What is the ideal coffee temperature for tiramisu?
5
Why did my Tiramisu Cake become dry?
5
egg yolks and egg whites
2
What can I do with some whipped cream and egg yolk mix?
4
Can raw egg yolks gelatinized from being stored be saved by blending and for which uses?
2
Sugar syrup with orange juice foams excessively
35
Why does this entire carton of eggs have 2 yolks each?