Did I make butter, or something else?

Tonight I tried to make some butter from some raw cows milk. I followed the instructions here, and let the cream I skimmed off a gallon of milk sit for about 24 hours to "culture." It didn't really smell "slightly sour" yet, but as I had already gone twice the prescribed time, I decided to move on anyway. I divided the cream between two quart jars, and shook them for about 20 minutes each, as described, and although solid clumps formed in each jar, there was no yellow tint.

So I transferred the contents of each jar into a mixing bowl, and used an electric mixer, per the instructions here, but it made no real difference, except to move the stuff around, so I finished off the batch by straining the butter milk from the solids, rinsing the butter under cool water, and adding a little salt. 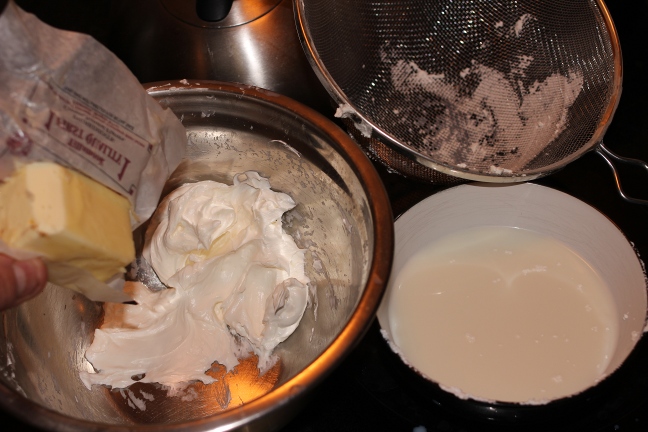 In the silver bowl is the finished "butter", in the bowl to the right, the strained off buttermilk, and I'm holding a stick of store-bought butter (Ingredients: Cream, Natural Colors) for color comparison.

This "butter" tastes okay, but doesn't have much of a buttery flavor. It is is also the whitest "butter" I have ever seen. But is it really butter, or did I make something else? To get "normal" yellow butter that tastes butterier, what should I do differently?

It's not hard: First milk cow :-), then let the milk settle in the fridge for a day or two. Skim the cream off the top

Use a food processor, or hand shake in a cocktail mixer or similar sized jar (only about a 100 ml at a time)

First you get whipped cream (2 to 5 minutes), then another minute of shaking and suddenly butter appears

It should separate very cleanly, with watery whey (save for soft cheese making), and lots of rough yellowish fat globules. If it still looks smooth it needs more shaking 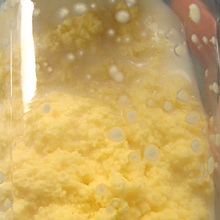 If you want to keep the butter for any length of time you will need to wash it a few times with clean water, and squeeze the water out of it after each wash

The colour you get depends on what your cows have been eating. It can be quite white

There is no need for heating, or any other additives

Your butter is probably white because the cow was feed on corn, grass fed cows produce yellow butter. It's also probably why it doesn't taste of very much as the quality of butter is very closely tied to the cow's diet.

If you'd like naturally yellow butter, add a little turmeric to the cream. A little goes a long way and I find that just little doesn't change the flavor too much.

First ...Yellow Butter you get in stores is that colour because they add yellow to it.

Second ...butter intensity that you normally associate with it is really the salt they add to it. Buy yourself some unsalted butter and do a taste test to see the difference.

Pure cow milk fat is mild in flavour and colour varies; both items are factors of what feed the animal was eating before being milked.

15
Do I need clarified butter to make mac-n-cheese?
7
How to make home-made butter?
5
what is the difference between butter spread and pure butter?
3
What is the purpose of kosher salt in peanut butter? Can it be replaced with something else?
2
Can I make puff pastry with half the butter?
2
When whipping cream, does its state continually cycle through various states? Is there a dead end at whipped butter? Or does something else happen?
0
Can I melt butter to make compound butter, and subsequently refrigerate?
3
No Butter Sous Vide: What did they mean by this?
10
How to make coffee-infused butter?