What are the different applications for differently shaped wooden spoons?

A while back I got a set of wooden spoons that contained 5 differently shaped wooden spoons. Take a look at the following photo to see the different shapes. 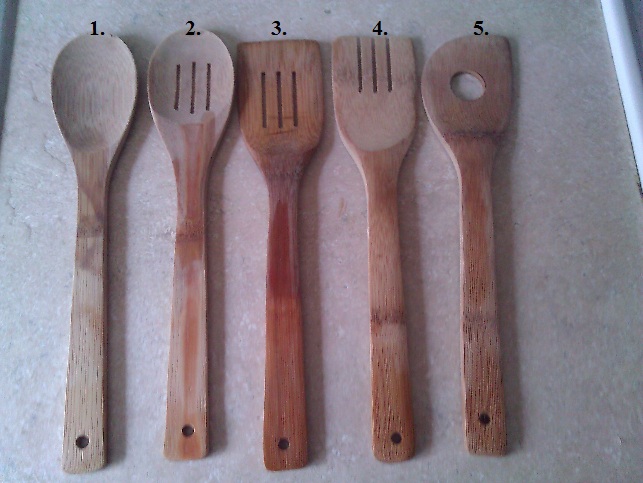 I have mainly been using wooden spoon #1 because that is typically the shape I am most familiar with when I think of a wooden spoon. I have yet to figure out what the other wooden spoons can be used for.

Are there any specific applications that each shape excel at?

Adding to the others:

4 and 5 appear to me home-made modifications of standard Chinese bamboo spatulas in order to use them for different purposes.

4 is probably intended to be a wooden fork, which would be useful for tossing pasta (together with another wooden fork or spatula). However, the homemade slotting is too narrow, and the "tines" to wide, to be really useful. You'd want something more like this: 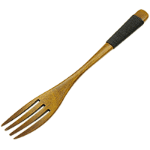 5 is, as rumtscho mentioned, a folding spoon for dough. This one seems to be improvised out of a spatula, though; the more common shapes of folding spoons are like either of the below: 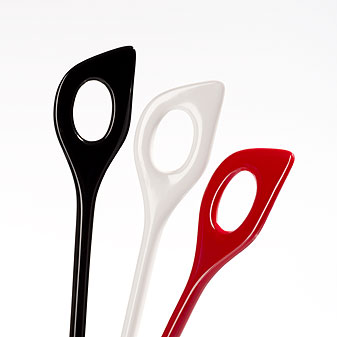 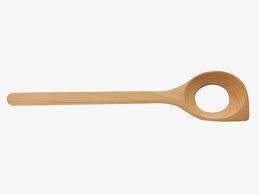 I think I might disagree with rumtscho about spoon #1 though. I use wooden spoons all the time for cooking and mixing, especially in non-stick pans. If what she's saying, though is that particular wooden spoon is not very well shaped, then I agree with her. The bowl of the spoon is too shallow, and you'd want a round handle rather than a flat one.

Number five is a folding spoon. It is made for folding flour into light foams without overmixing, for example when making Genoise. The big hole makes the mixing easy, and the shape is good for scraping the bottom of a round bowl.

As Dave Griffith already said, 3 and 4 are for stirring stuff in pans and skillets (making roux, cooking off the liquid in tomato or pepper puree for ajvar-like condiments). They prevent the contents burning on the bottom, because they remove the very heated layer from the bottom and let cooler liquid flow in.

The slot in spoon 2 make it a poor replacement for a skimming spoon. Normally, you want a bigger perforated spoon for that, with bigger holes. Also, I think metal is a better material in these cases, it isn't so good to put wood in boiling water.

Number 1 is useless in cooking. Historically, these spoons were made for eating. When they were big enough, housewives just used an eating spoon for stirring, because this is what they had at hand. Nowadays, people don't eat with wooden spoons, but the tradition persists in that they continue using the traditional shape for stirring. This is a bad idea. It has the wrong shape for flat-bottomed pans and curved bowls. There is no use case for which the other spoons aren't a better fit. Maybe getting flour out of a package into a bowl, but being much flatter than an eating spoon, it is inferior also for this use.

Flat-ended spoons like 3 and 4 are for good for scraping the bottoms of skillets. Spoons like 5 are excellent for stirring thick sauces, as they let you easily stir the bottom corners of pans. As for the slots, I've never noticed them making a bit of difference, other than if you wish to taste the solid contents of a soup without making a mess with the liquid.

I use my wood spoon shaped like your #5 when I am cooking and stirring liquids such as for sauces or puddings. It allows for a good stir without causing spills, and the flat bottom lets me be sure to scrape the bottom and corner of the saucepan as I stir. Mine now has a crack in it and so I am on the look out for another. They're hard to find with a flat end on the spoon "bowl."

Number 5 looks like a Girariso, a Risotto spoon designed for abrading as much starch off the rice grains as possible...

Spoon #2 is perfect for snatching a piece of pasta (not spaghetti) from a pot full of boiling water. It drains the pasta (let's say penne) and leaves the water behind. Also cools the penne quicker so it can be sampled for done-ness.

9
What should I look for in a cooking pan for Risotto?

12
What kinds of pressure cookers are there, and what are they good for?
3
What are these used for
13
What are some recommended methods of cleaning wooden cutting boards?
12
What are the tradeoffs between spiral and C-shaped dough hooks?
2
Are can openers like the original Swing-A-Way sold under a different name now?
6
What are the pros and cons of various woods used in wooden utensils?
10
What kind of teaspoon is this?
3
What are the different parts of a zester called?
2
What are the vertical-edge plates called?