I'm trying to make a dessert I had in Palermo, Sicily. I wanted to find a recipe for it online, but I can't remember the name of it now. I know it's fairly common, but googling didn't help. It's basically just a large round flaky pastry with a large opening in the center and filled with a chocolate cream. The cream is not hidden by the pastry, but it is in the open. It's similar to a danish.

Unless I am terribly mistaken, this question is about this thing, only with a chocolate creme instead of vanilla pudding in the middle: 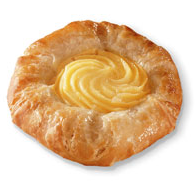 And no, I don't know an English name for that thing more special than "Danish", else I would have answered already.

That sounds a lot like a Czech Kolache, except that usually has fruit in the middle rather than chocolate. I suspect a lot of European regions have something similar. Some bakeries have made variations with different fillings 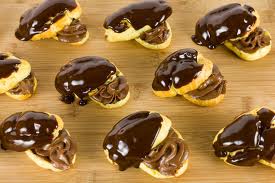 Maybe you mean an "occhio di bue", it is quite common to find it in the italian bakeries and you can find the recipe here: http://www.tortealcioccolato.com/2008/07/01/occhi-di-bue/ (sorry but the only site I found is in italian)

Is it the calzone ..or the Eclair?? I looked up some italian desserts and found something called chocolate Canollo I also know that in Sicily they have the kinda of a puff pastry filled with all kinda stuffings called Bigne ! Hope this was helpful

Not the answer you're looking for? Browse other questions tagged italian-cuisine pastry or ask your own question.

9
What is the difference between a Sfogliatelle and a Lobster Tail (Pastry)
2
How do I make the filling in pain aux raisins / danish pastry
5
What is the maximal thickness for choux pastry?
4
What is the name of this Venetian pastry?
2
What is the name of this Italian pastry?
1
cooking pastry for bottom of pie using cold filling
4
How can I prevent pastry becoming soggy when it has a filling and is stored overnight?
4
What is the best sugar for sweet short crust pastry?
5
What are the Purposes of the Types of Meringue that are used for Pastry?
0
What are the consequences of failing to strain my pastry cream?