What type of tea should I use to make Thai Iced Tea?

I love the sweet iced tea you get at Thai restaurants, and want to make my own at home. I used to buy a concentrated solution online (added water and half and half), but they discontinued it. I'm not sure what type of tea is used, but it is reddish in color and has hints of coconut taste in it. Cheers!

I currently live in Thailand and there is really only 1 brand that's used (If there is another brand I've never seen anyone use it!) nationwide by all the street vendors to make traditional Thai Ice Tea and that's this one... 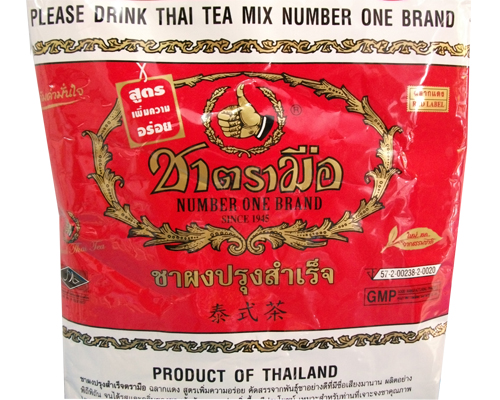 I don't know the name of it but I'm pretty sure it's just Number One Brand. I'll confirm the name when I get chance!

Most of the recipes I've seen don't have any coconut in them. The most common way to get that flavor would be to use coconut milk instead of some (or even all) of the dairy. This could be pretty rich, but given that you're using half-and-half already, probably won't bother you too much.

As for the type of tea, it really depends on what you have available. If you're lucky, you have a well-stocked grocery store or an Asian one, and you can just get traditional Thai tea. If not, you want black tea. Either way, it should be brewed strongly.

Any vibrant color is generally just from food coloring, not the tea itself. If you can buy Thai tea, it might well have the color in it. If you're using some kind of plain black tea, reproducing the color would probably mean adding a little bit of red and yellow food coloring.

The kind of tea you want is Jasmine. It has a nice floral note to it that is used in Thai Ice Tea, but can taste slightly coconut-y. I bought some bottled jasmine tea from a local store, added some sugar and heavy cream over ice, and it tasted just like the tea you'd get from a Thai place.

Celestial Seasonings makes a Thai Coconut Chai which may get you a little closer in flavor and color. Coconut milk instead of half and half sounds good, too.

As far as I can determine, there is no such thing as "Thai" tea. It's very strongly brewed black tea, and the color (originally) came from Tamarind pulp. In the US, where we don't deal well with tamarind, it's likely to be food coloring. The "secret sauce" is a combination of orange blossom water, star anise, and sometimes other spices like cinnamon or cassia, all sweetened with evaporated milk and sugar. The actual recipe is usually pretty well guarded, so experiment.

Not the answer you're looking for? Browse other questions tagged tea drinks beverages or ask your own question.

14
What is a good technique to make Iced Tea?
6
How concentrated can I brew iced tea?
10
Why is my green tea brown?
5
How can I improve rich taste of spiced milk tea?
3
Hot tea to iced. Safe?
4
making iced tea with lowest caffeine content
5
“Sludge” at the bottom of matcha/green tea latte
1
Grassy Tea and brands
1
Better way to make Iced Tea
5
Samovar Tea: Let it brew the whole day?