Also what chemicals do the white and yolk contain, and what causes them to cook at these temperatures?

As an answer to your first question: what chemicals do the white and yolk contain?

Unlike the yolk, which is high in lipids (fats), egg white contains almost no fat, and carbohydrate content is less than 1%, it contains water, protein, trace minerals, fatty material, vitamins, and glucose. wikipedia

To get this kind of soft eggs: 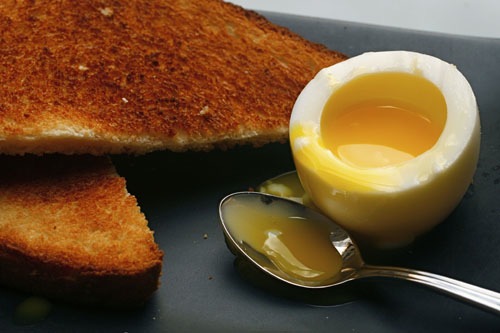 Whites set at 155°F (68°C) and yolks set at 158°F (70°C). For best results, heat water to 180°F (82°C) as measured on an instant-read thermometer. After adding eggs, adjust heat to maintain temperature at 180°F for about 6 mins (+/- 15 seconds). If you do not have a thermometer, keep the water at the early simmer stage when tiny bubbles are just beginning to break the surface. food-lab-science-of-how-to-cook-perfect-boiled-eggs

So I guess what you have read is true. Hope to enjoy.

I suppose that you with "cook at N°C" mean that the components coagulate or turn solid?

Although all the egg's fat is contained in the yolk, the fat is not relevant for the different temperatures, at which egg whites and egg yolk turn solid. The process causing this is the so called denaturation of the proteins contained in the egg. The concept of denaturation is actually a broader subject and depending on the actual type of protein, the denaturation causes different chemical changes to the protein molecules, it can be triggered by different means and may or may not be reversible. As opposed to the proteins contained in eggs, milk proteins are for example not particularly sensitive to heat. You can heat milk to high temperatures without causing any reaction in the milk proteins. Adding even small amounts of acid (e.g. lemon juice) will however cause the milk proteins to denaturate at low temperatures and flock out as cheese curd.

Back to the egg ... Both in the egg white and in the yolk, many different kind of proteins are dissolved in the watery substance of a fresh egg. You can find about 40 different proteins in the egg white and a mostly different, but just as comprehensive mix in the egg yolk. Most of these proteins denaturates by rearranging the molecular structure in such a way that they loose water solubility and turn in to a more or less solid structure. Depending on the exact protein, the denaturation starts at different temperatures and progress at different speeds. I don't have a complete list of the denaturation temperature of all the egg proteins, but as a rule of thumb, most proteins in the egg white denaturates between 62 and 65°C, while the proteins in the egg yolk lies between 65 and 70°C. Especially in case of the egg yolk, the denaturation is a gradual process, starting with the yolk thickening but remaining liquid, before it actually becomes solid above 70°C. This can easily be seen when using egg yolk as a thickening agent for sauces or deserts. The sauce will start to thicken at roughly 65°, but if you reach 70°, the egg yolk may instantly turn solid and flock out (just as when adding acid to milk).

8
Sous vide eggs - how to get a perfect soft-boiled egg?

9
How can I rescue a soft boiled egg that is too soft?
20
What causes the green ring between yolk and white when hardboiling an egg?
8
Substitute for egg yolk in ice-cream (Egg Allergy)
3
What causes egg-covered puffed rice cakes to become soft when pan fried (and how to control it)?
8
What is the reason to coddle an egg?
5
Why and how does the egg white stick to its shell when cooked sous vide?
0
Whole Egg, Egg White or Egg Yolk for binding Hamburgers
3
How to soft boil eggs with a countertop egg steamer?