I need a new pan for non-stick applications (eggs) and I want to try using a well-seasoned iron or carbon steel one. I use an induction stove.

Normally, the arguments I hear in favor of carbon steel are that it heats quicker, because it can be made thinner. But isn't this reversed on induction? Won't the bigger mass of metal heat quicker, or at least as quick as the thin one, if I don't have to wait for the heat to get conducted through the heavy material? And of course, I want to keep all the advantages created by the thicker pan's thermal mass.

I also have the option to get forged iron pans, which are thinner than cast iron ones, but still have the physical properties (thermal coefficients and whatnot) of iron, not carbon steel. Is there an advantage in doing so (maybe a smoother surface?)

I would be especially happy to hear from somebody who has compared both kinds of cookware on induction, to know how they compare under real conditions.

Here are the pans I am considering: 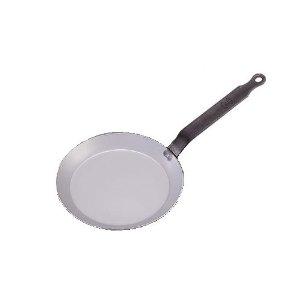 2 forged iron. For some reason, one doesn't have the marks I have come to associate with forged iron pans. I already have one (a very big one, 30 cm) and I am not too happy with it. Are the marks important, do they say something about production quality? 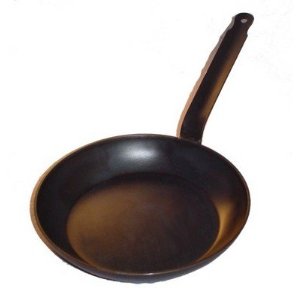 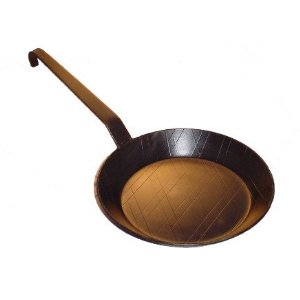 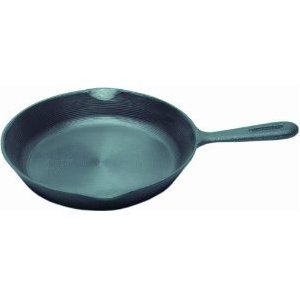 Induction cooking works by generating an electric current in the metal cooking vessel and converting that current into heat, which requires a resistive material (i.e. a poor conductor).

It's a bit of a catch-22, because you need a good conductor to actually distribute that heat. This is why some of the best induction cookware is clad metal - two layers of (magnetic) steel around an inner layer of highly-conductive aluminum or sometimes copper, sometimes layered multiple times this way. The thick magnetic sheets generate heat, and the thin conductive sheets transfer it.

Thicker metal means that the surface is slightly farther away from the magnetic field source, but also has significantly more resistance (since resistance is proportional to length, and we are talking about doubling or even tripling that), so theoretically it should be much more effective at converting the electric current to heat, and heat up faster.

The disadvantage of a thicker metal - assuming that there is no additional heat transfer material - is hot spots. This doesn't matter at all for a skillet, but if you're trying to cook with, say, a cast-iron stock pot or dutch oven, you'll find that the hot spots are even worse on an induction cooktop than an electric or gas cooktop, since the surface heat is generated very rapidly but takes forever to spread.

Carbon steel is a pretty good compromise, which is why it's generally the material of choice for woks, and that's the material I'd choose for an induction cooktop for any vessel other than a skillet or frying pan (assuming I had to choose a single material; again, copper/aluminum-clad stainless steel works better). For pans/skillets, you want the heat to stay focused on the surface, which makes heavy/thick cast iron a better choice.

I can't honestly say that I've had much experience with forged iron, but all my instincts are telling me not to bother with it because it would be combining the worst of both worlds - lower resistance at the surface but still relatively high resistance up the sides. The only caveat to this would be a possibly significant difference between the magnetic susceptibility/permeability of forged vs. cast iron, but this is likely going to vary from vessel to vessel anyway (not all cast/forged iron is the same) so I think your best bet there is to try sticking a magnet to it. If it sticks much harder to the forged than cast iron (doubtful) then it might be good for surface cooking; I still wouldn't choose it for a larger pot.

One important factor in induction cooking is surface contact. This means that the base has to be sturdy.

I have a carbon steel skillet similar to your option. After about one year, it's starting to warp. So, I wouldn't buy one, if I were you.

You say that forged is thinner than cast iron... I'd go for the cast iron.

As for the heat transfer, induction cooking is different from direct heat cooking. According to the Wikipedia, the heat is generated at the surface of the metal, so that's not an issue.

You're perhaps missing a point about induction cooking when you bring heat transfer into the equation. Induction cooking is magnetic flux generating heat in the material, so the heat generation is virtually instantaneous; in fact, temperature "overshoot" is a bit of a problem in cast iron, so the skillet should remain on the "burner" surface for about three minutes before adding oil. The only heat transfer will travel up the sides of the skillet until it, too, gets hot, but a good induction cooking surface will maintain the contact bottom temperature (that's where it senses the temperature, so don't put paper or newspaper between it and the skillet bottom) at the set temperature. A Lodge carbon steel skillet is either 10 or 12 gauge steel, depending on the size, so its lighter than cast iron, which means it's easier to handle. Will it warp? Depends. Take good care of it, season with oil and butter in a 370 degree oven after the instances of washing with soapy water, and you should never experience warpage. Of course, if you sear a lot of beef steaks at 500 degrees and plunge your hot skillet into cold water, all bets are off. I'm 81, so the weight of cast iron necessitates that I use the lighter carbon steel skillets from Lodge.

In my experience most pans can only pull 45-65% of an induction cooktops rated power.

The ONLY pans I've personally used that do better are Cast Iron. With Cast Iron I see the full 100% of rated output.

When viewed with a thermal imager, the heating is very even. (probably more of a problem with flame / radiant where conduction plays a larger roll.

In summary I don't like dealing with iron, and would prefer a good non-stick. Wish I there was more information on the performance of such pans. Seems to me you won't know how it does until you buy it, and meter your circuit.

Not the answer you're looking for? Browse other questions tagged equipment pan cast-iron induction carbon-steel or ask your own question.

7
Why can't I get a seasoning layer on my carbon steel pan using an induction hob?
6
Should I polish a cast iron pan for use on a glass cooktop?
1
What's the minimal set of cookware for Chinese, Japanese foods on an electric induction cook-top?

16
Cast Iron vs Steel
4
Is there a difference in the ease of seasoning cast iron, forged iron, and carbon steel?
3
Enameled Cast Iron vs Stainless Steel Roasting Pans
4
Should I cook in the old carbon steel skillets I just bought at a flea market? And can I use them for campfire cooking?
0
Choice of new seasonable cookware (iron/carbon steel, pan/wok)
7
Avoiding carbon on cast-iron when cooking hotter than usual
4
Seasoning a forged iron pan / cast iron pan - Is there any research about the process?
21
What are the advantages of seasoned cast iron vs enameled cast iron?
4
Comparison between cast iron and forged pans