My wife loves rasmalai and we make it often. 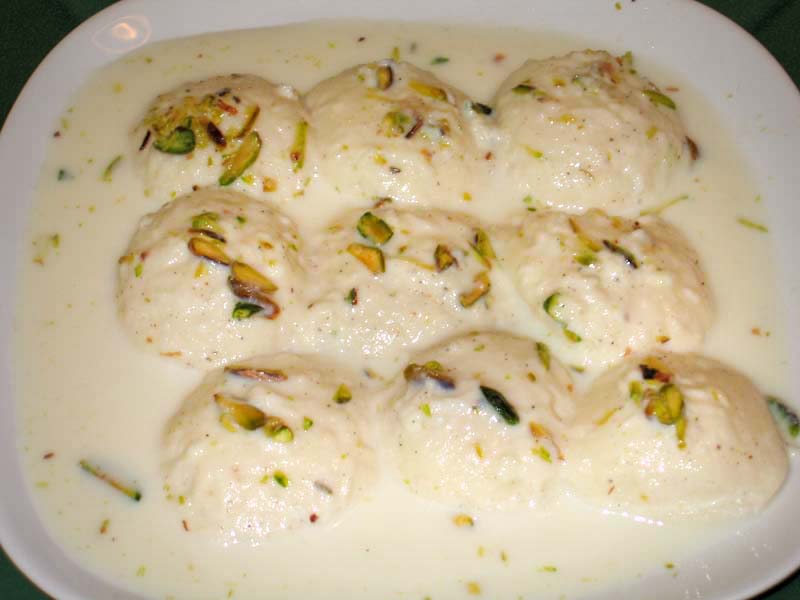 I have used several different recipes and both made the paneer from scratch as well as using paneer purchased at a local Indian grocery store.

Some recipes call for the paneer balls to be cooked in the syrup for some time, sometimes even in a pressure cooker. Any time that I have tried to do this my paneer has completely melted into a sweet, foamy, butter slick. I stopped trying the pressure cooker recipes because it was too wasteful.

Other recipes, including those from Indian coworkers, don't pressure cook the cheese and only briefly simmer it before chilling the dish.

Is rasmalai traditionally cooked in a pressure cooker? If so what does it accomplish and how do I keep my paneer from melting?

Not something I've ever come across, but you have to remember that paneer is a vague word meaning cheese, not very specific, and it runs through a range of IndoAsian languages with slight variations in meaning - like in parts of the US "gravy" means any kind of sauce, but in UK gravy is always brown.

Go to the end of my street and ask for paneer, you will be given a prepacked piece of something with a texture somewhere between soap and parmesan that tastes like cheddar. That's what you get in West Yorkshire, which is like the Punjab/Kashmir border with buses. Cut into cubes, serve with sauce and peas, it makes a perfect motar paneer.

I did a search for recipes and the first one I found used a pressure cooker, and made the paneer from scratch, with a video. I could see that the process worked for those cooks. But it doesn't work for you, and I think the reason is that you don't have a local herd of buffaloes.

Buffalo milk is preferred in most parts of India, they use it without specifying it. You will not get the same results with cows' milk. You might get good results if you start from mozarella, the best types of which are also made with buffalo milk. Remember how hard it is to get mozarella to melt when you put it on pizza, and you might begin to understand why I'm suggesting it.

Referring to the pressure cooker - that is used to establish a high starting temperature for the syrup. The cooks I saw made a syrup, added the pieces of paneer, heated the cooker until the weight lifted, then switched off the heat and left the pieces to soak for exactly five minutes before removing them. I would guess that the start temperature would be around 122 degC, but that really is a guess. You just have to establish a procedure that gets enough syrup into the pieces without them falling apart - trial and error must be your guide, because it is evident that there is a big variation from the source of the curd.

Once you've established something that works, you might find it interesting to try flavouring that "soaking syrup" by adding rose cordial or similar ...

Postscript: I went past the end of my street to the supermarket around the corner. They cater for Indoasian tastes and Jamaican tastes. The cheese selection is very boring, the best pick is a very expensive mature red cheddar/dunlop cheese from Jamaica, and they sell the "soapy" paneer pre-cut into cubes in packets. They also sell half a dozen forms of mozarella style paneer, mostly canned in brine, and a strange French product in rectangular cartons labelled in squiggle - Arabic or Urdu, you guess, but it shows the product being sliced on the pack. Most are labelled as being made from cows' milk, one is goats' milk, but nothing marked explicitly as buffalo milk - then again, that doesn't surprise me.

You can buy pre-prepared rasmalai, rassmalai, and rasomalai in there. I bought the rassmalai because it is locally produced by Mumtaz, a company who have a restaurant I have visited without being poisoned. The rasomalai is produced by Royal, who have a nationwide reputation as a supplier of Indoasian sweets.

I was disappointed - the cardamom and saffron were undetectable, there were only two pieces of swollen curd in a sauce of condensed milk and cream with just enough pistachios added to give visual evidence, as opposed to flavour. £1.85 might be a fair price in a restaurant, as a street price it was a rip-off.

I can see why Sobachatina's wife would like the stuff, but I know I could do better, so I understand why he wants to put some effort into the dish. I don't have the time right now, but I will put some exertion into this in the future.

Not the answer you're looking for? Browse other questions tagged dessert indian-cuisine or ask your own question.

12
Why rinse basmati rice?
14
Why do chefs use Gold and Silver Leaf?
0
Why does a mix of condensed milk, cocoa and coconut solidify in the fridge?
2
Why is my fresh tofu fa (douhua) sour?
3
Cook steak in oven with tray meant for deserts?
3
Pressure Cooker suitable for traditional Indian dishes, available in Europe
0
Why isn't my roti soft?
1
Does microwaving fully cook chapatis?
3
Can I add peanut butter to cook and serve pudding to make peanut butter pie? If so, do I use less liquid?
5
Why my Biriyani gets mushy when I cook for 30/35 mins (suggested by lot of chefs)