What is the difference between a biscuit and a roll?

Most restaurants in the US bring either biscuits or rolls to the table with your meal.

What is the difference between the two?

With this method, wheat flour is mixed with water to form gluten. The dough is kneaded to align the gluten into sheets which can be inflated. Developing the gluten is essential to this type of dough.

When baked, this dough produces a springy sponge that is chewy and easy to slice. 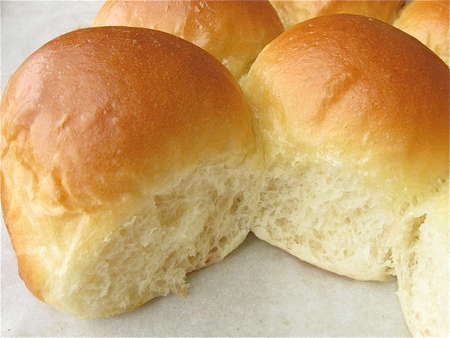 With this method, solid fat is cut into flour. The fat is not fully incorporated but is instead left in small pieces. Liquid is added and mixed in only briefly. Only a very small amount of gluten is formed and the fat is not homogeneously distributed in the dough.

When the dough bakes, the pockets of fat and lack of gluten produce a flaky, fragile product which is the characteristic biscuit texture. 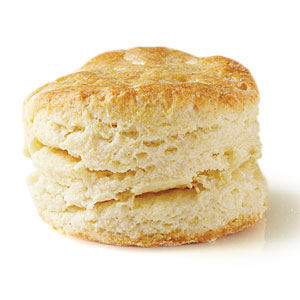 In the U.S. biscuits are made with chemical leavening, they use baking powder to cause them to rise.

There are obviously other differences in the recipe(s) but baking powder vs. yeast is the essential difference.

While the two are visually characterized by their structure, one homogeneous and the other layered, those structures are dependent on the methods of leavening.

Rolls and biscuits were developed over time to optimize the combination of ingredients and technique. Change either one and you would have something different.

A roll is alive with yeast that persists and continues to live after baking. A kneaded roll made with chemical leavening would require much leavening be used. The flavor and texture would both be different. It would look more like swiss cheese than angle cake, be drier and have a bitter taste. After baking it would rapidly dehydrate.

A biscuit is the result of a chemical reaction that ceases when baking is complete. If yeast were simply mixed into flour along with butter, the yeast would be unevenly isolated from contact with the carbohydrates that it digests and the oxygen it requires to produce CO2. It wouldn't rise nearly as much, or as evenly. After baking yeast would survive and continue to digest flour where it was exposed to air, and quickly mold.

So rolls and biscuits are different methods of combining ingredients with different leavenings.

Pssst3Pssst3
1
3
Add a comment  |
Highly active question. Earn 10 reputation (not counting the association bonus) in order to answer this question. The reputation requirement helps protect this question from spam and non-answer activity.