How do I determine the cut of a pork steak prior to purchasing it?

Pork steaks can be (quoting Wikipedia):

cut from the Loin, Leg or shoulder of the pig.

When looking at a pork steak, is there some way that I can visually determine where the cut came from, perhaps by the bones in the steak? Specifically, I'd like to be able to identify shoulder cuts - but being able to quickly identify all three cuts would be extremely useful.

There are times when one of the meat cutters is at my supermarket and available for asking, otherwise not. The labels always say 'Pork Steak'.

The bone structure is an excellent clue -- each of these three cuts have completely different bones -- and you should be able to learn to distinguish the muscle structures easily as well. (There's almost certainly a price difference, too -- I'd expect a shoulder steak to be the cheapest, followed by leg, then loin and rib.) I've made some quick structural drawings, and I'll try to describe them in detail. 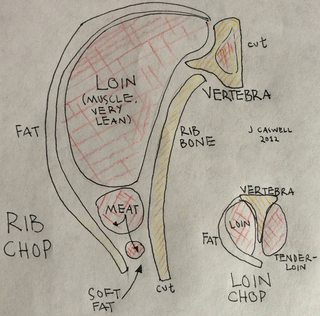 The loin is a long piece of muscle running alongside the backbone and atop the ribs. It will be cut vertically, giving a oval/oblong cross-section somewhere around 4" diameter. That oval is solid muscle, although there may be some streaks of fat. There will usually be another strip of muscle above it, and a strip of fat along the top and one side (this was the pig's insulating back fat). Opposite the fat will be a rib bone, if it hasn't been removed.

The bone will not be split, but it will be cut short at some point. It is convex towards the fat, and usually has some of the fat running down along its length. If the rib is there, the steak (or "chop") will have a smaller oval of muscle below the loin, separated by fat, which would otherwise be served as part of the rib meat. As the cuts of the loin move backwards towards the leg, the tenderloin may begin to be incorporated, and the rib will disappear. The tenderloin is perhaps half the loin's size, and appears on the opposite side from the loin of a slice of the backbone, which has a rib-like sideways protrusion. This cut is the "porterhouse", also known as the "T-bone" if the steak were beef. It may also be called a "loin chop", as opposed to the "rib chop" from futher forward.

Rib/loin chop summary description: oval/oblong of solid meat with a strip of fat at one side, possibly an intact bone on the opposite side, curving towards the fat. Possibly two ovals of meat, one half the size and on the opposite side of a protrusion of split bone from the larger. 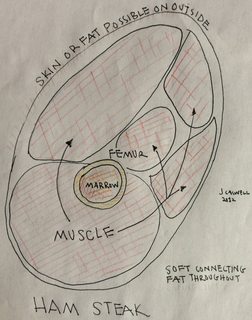 The part of the leg you're getting for steaks is the upper part, i.e. the thigh, sliced horizontally. This has a single cylindrical bone -- the femur -- running through it, which will be around 1 1/2" diameter and off-center. The thigh is basically oval in cross-section, and made up of several large muscles, with fascia (silver skin) and a small amout of fat between them, so you will see four to half a dozen large pieces of muscle in the steak. There may be a strip of fat along one side, and perhaps even some skin attached to that. A leg steak is the same cut as a "ham steak", although "ham" is often used to mean that the meat has been cured, and possibly even cooked.

Leg summary description: Oval-shaped steak with a circular slice of bone off-center. The steak is composed of half a dozen sections of meat, possibly separated by thin strips of fat, and may have a strip of fat on one outer side. 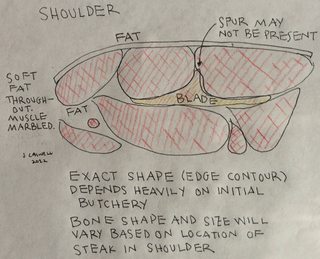 The shoulder is a beautiful cut of meat on a pig, made up of dozens of pockets of marbled muscle, connected and wrapped by intermuscular fat, as well as an extension of the loin. Like leg, a shoulder also has just one bone, the blade (which connects via a socket to the arm-bone near the bottom of the shoulder). The shoulder blade (scapula) is somewhere in the center of the shoulder, and is, as you would expect, a thin, arrow-head-shaped formation, with a flat ridge running down its center; from the top, it looks a bit like U+22A6: ⊦. (This protrusion or spur points to the outside of the pig.) Therefore, a slice across this shoulder muscle will be made up of several pieces of white-streaked muscle, held in a web of fat, and it will either have a fully-enclosed thin segment of bone in it, or a split where the bone was removed. With the bone left in, I believe the cuts are usually made horizontally, and the muscle segments may appear larger (they are mostly longer than they are tall). With it removed, the slice could be made vertically, in which case you will see more, and smaller, pieces. There may also be a strip of fat along one side of a shoulder steak; this is the same under-skin fat that you saw in both other cuts.

Shoulder summary description: Vaguely rectangular piece of meat, with a thin slice of bone in the center. The bone may have a perpendicular ridge. The meat is in many small pieces and is webbed with fat.

For less diagrammatic images, this Texas 4-H site seems to have some good photos of the various cuts, grouped by the section of the pig. (Other meats such as beef and lamb cuts are included on this page too!)

12
How do you make pork rinds?
5
What other cut of meat can replace pork shank?
6
Recommendations on how to have a hog butchered?
0
How to boil pork knuckle?
1
How to chill and reheat three layer pork properly
1
How do you separate the skin from pork?
3
Crispy pork belly, how can I cook the inside more?
2
Why did my pork center cut loin turn out tender but tasteless?
5
How to cook roast pork with a crackling wrap
1
What would you call this cut of pork?