Why does my dough never "fall" after its first rise?

My bread recipe (from Artisan Bread in Five Minutes a Day) calls for waiting for the dough to double, then "fall." It never falls, though I cover the dough as instructed (not airtight) either with a towel or plastic wrap sprayed with cooking spray. I have tried spraying the bowl with cooking spray, and have tried without. Neither results in a "fall."

I've tried using a wide stainless steel bowl as well as one of those food-grade rectangular plastic storage containers a la Alton Brown.

Is the "fall" important? If so, what can I do besides slam the bowl to coax the dough to fall as instructed?

Basic Physics of the System

Bread rises (as you probably know) due to microorganisms, primarily yeast, converting sugars into CO₂ + byproducts. The CO₂ forms bubbles, stretching the gluten in the flour. In order for the bread to rise, the microorganisms must produce CO₂ faster than it can escape from the dough.

Graphed over time, the amount of CO₂ produced would start at 0, fairly quickly rise to its maximum (as the yeast, etc. come back from dormancy), then slowly decrease, eventually to 0 (as they run out of food and/or are overwhelmed by byproducts such as alcohol). The amount of gas escaping from the dough also changes over time. It must obviously start at 0, and probably increases over time (after all, there is more to escape), and eventually of course its all escaped and thus it must be 0 again, but I'm not sure of its exact shape. So, a diagram: 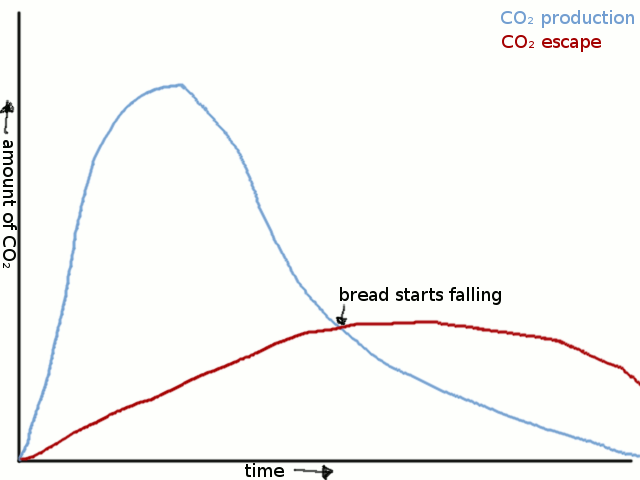 That's the basic physics of the system. At some point, the bread must fall. (Well, maybe in a 0-g environment it would shrink instead of fall, but…)

How the Environment Matters

The microorganisms are very sensitive to fairly small changes in their environment. In particular:

Also, generally speaking, slower leads to better flavor. So its not a bad thing.

Give it longer. Provided you've covered it in plastic (so it doesn't dry out), it'll eventually fall.

Keep in mind that "fall" doesn't mean it'll return to its original size, just that it'll fall back from its maximum size. The "or flattens on top" comment in your book is a pretty accurate description of what it looks like. Normally, while its rising, there is a dome shape on top, with the center as the highest point. When it starts falling, that dome vanishes, and may even invert (as in, the center will be the lowest point).

I've made preferments that take upwards of 20 hours to fall. It will eventually happen. And when it takes forever, it'll probably taste better.

That book, or at least the recipe you linked to, basically has you making a loaf of bread out of a pre-ferment (poolish, sourdough starter, levain). Using a pre-ferment gives more flavor and a better shelf life.

If you maintain a sourdough starter for a few days, regularly feeding it, you'll see it rise and fall regularly. Ideally, you want to use it when its at its maximum volume, just before it falls, to ensure that you're getting the most potential rise out of it in your bread.

Since you're not maintaining a starter in this recipe, you don't know when that maximum volume is or what to look for. The first observable change after letting it ferment and rise would be a fall, and if you use it when it's just fallen then you've still got a lot of yeast in there for leavening.

This video shows an almost ready poolish near the end.

Ultimately, the dough will fall, given enough time.

As long as you give it enough time to rise and the right conditions (e.g. Around 35 degrees c) then it should still be fine even if you don't get the fall you suggest.

When I make bread I just leave it for a while based on circumstance (anywhere from 1 hour to 3-4 based on ambient temp and what else I'm doing ), I then knock back the dough to remove most of the air (see 1) and it generally works fine.

Not the answer you're looking for? Browse other questions tagged bread dough rising or ask your own question.

8
Why does my pizza dough rise so inconsistently?
1
Why did my French bread neither rise nor bake properly?
3
Can I rest my Ciabatta dough overnight?
2
My french bread dough did not rise on the second rise after forming the loaves
1
Why didn't my laminated dough rise?
13
Can I refrigerate bread dough after the first rise and bake it later?
3
Bread baking: dough has little holes after first rise
1
Does waiting for bread to rise before baking change its nutrient composition?
2
How long should pizza dough rise?