What’s the sulfur in dumplings for?

When making Thuringian potato dumplings, an integral part in the process is the so-called “Schwefeln”: Sulfur that comes on threads is burnt inside the closed pot of potatoes.

Native Thuringians, if asked what the sulfur was for, will reply that sulfur dioxide prevents the dumplings from turning gray during cooking. Is there anything to back this up? Are there any possible side effects, especially wrt taste?

EDIT: Add picture showing dumplings (the bright yellow ones on the right) one day after they were prepared. 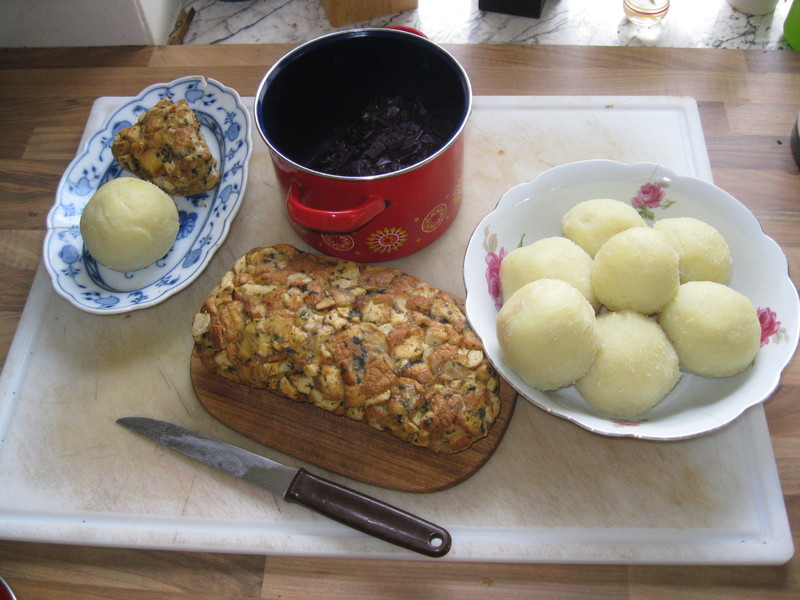 I have done the recipe many many times without the sulfur, just heard about it for the first time, even though I am German. I never noticed the potatoes turning brown. Typically you grate the potatoes directly into a bowl filled with water and keep them covered.

I'd say either way is ok, the little bit of sulfur dioxide is not going to kill you. Alternatively, try ascorbic acid or lemon juice.

Btw. my favorite type of dumpling is this one, filled with apricots: Apricot Dumplings, Marillenknödel.

They don't have the sulfur issue, because the dough is done with cooked potatoes, and they are covered with breadcrumbs anyway.

Not the answer you're looking for? Browse other questions tagged dumplings or ask your own question.

12
How can I replicate authentic German potato dumplings?

5
Dumplings - What happened?
1
Looking for Chicken & Dumplings pointers
13
Why are my dumplings made of evil?
4
Making dumplings without a snug lid
3
I ruined my dumplings in the crock pot
1
What makes dumplings ("knödel") mushy and sticky ("patzig")?
2
Fat free dumplings?
2
Chicken and Dumplings soaked up all the broth
2
How to keep dumplings from quickly drying out
2
How to prevent dumplings from sticking together