Can you make popcorn in a pressure cooker?

Will the temperature become too high and will the popcorn burn? Can anything bad happen? 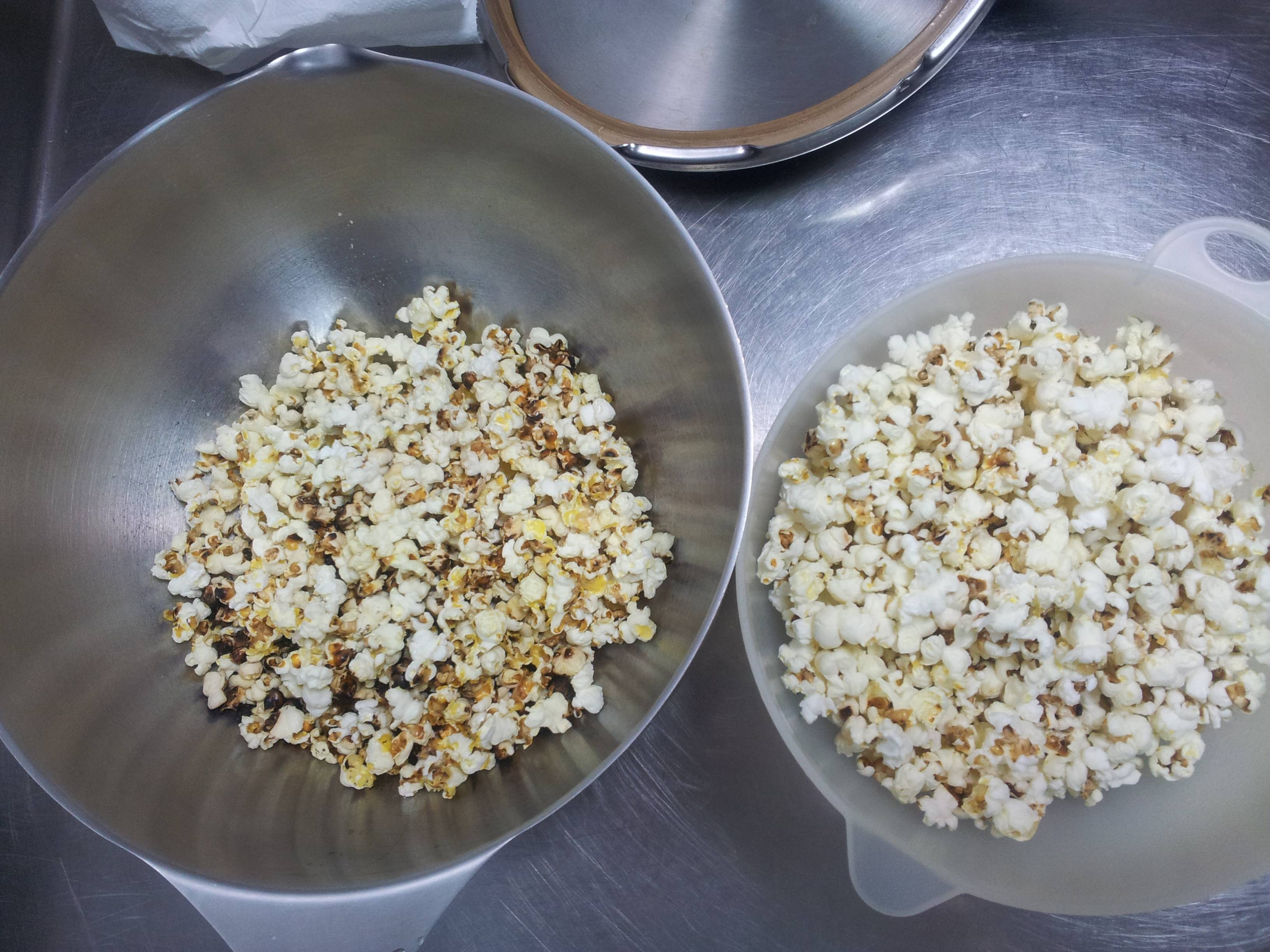 On the left, 5 minutes under pressure. On the right 3,5 minutes without pressure. The pressurized popcorn was less fluffy and a bit burned (I just didn't hear them pop).

I never tried it, but I don't think it is a good idea.

The point of popcorn popping is that you cook the inside of the kernel within its hard shell until the internal pressure increases so much that it breaks the shell, releasing the starchy liquid inside as a foam. You need a pressure gradient, with higher pressure inside the kernel than on the outside. So, introducing high pressure outside the kernel is counterproductive. It will certainly result in more duds. I don't know if some kernels will be able to pop, but if yes, I expect them to take longer to pop, and create a denser foam, not light and airy popcorn. So, while I guess you could experiment with it if you don't have anything better to do, theory predicts that the experiment outcome won't be good.

Why did you want to try it at all? Popcorn doesn't take long to pop.

The reason someone might investigate popping popcorn in a pressure cooker is because of the awesome potential to pop it all at once upon releasing the pressure. If you can keep the popcorn from popping with the pressure and bring all the kernels up to a popping temperature then theoretically you could perfectly pop them all at once by releasing the pressure. But like other people have mentioned there are big risks. I looked into it more and I don't think a pressure cooker can handle a high enough pressure for it to work. The other thing making it impossible is there is no way to know when the correct temperature is reached. Lets let mythbusters handle this one.

A pressure cooker with the lid closed and sealed would be a VERY bad idea, even dangerous? A pressure cooker is made for water (it is sealed with some kind of rubber/silicon seals), if you where to cook with oil with it sealed the temperature would be MUCH higher than what the cooker would be made for using water. The water/steam inside a fully pressurized pressure cooker is somewhere in the 120C (250F) range. Oil boils at a much higher than that even without pressure, 175 and 190 °C (345–375 °F) so with pressure the temperature would probably be more than double that what the cooker is made for. The seals would probably melt? And you could get all sorts of 'funny' effects. Do not try this at home folks!!!!

But if you close but not seal the lid it should be OK.

A pressure cooker with the valve open apparently makes good popcorn, see here. As for with the valve closed I do not know. I wouldn't expect anything bad to happen, but I would not expect the results to be very good as the pressure would likely damage the consistency. I'd love to hear about it if you do it though!

The only thing I'd worry about is the oil, if that came out super-heated it would be dangerous. That, and this site warns about too much oil damaging your pressure cooker.

Pressure cooker popcorn is the best.

Did you ever pop popcorn in your pressure cooker? It’s delicious. Just leave the steam vent open so the steam can escape. In my 4-quart cooker, I use 2 tablespoons of oil and 1/3 cup popcorn. —Bernadine

Not the answer you're looking for? Browse other questions tagged popcorn pressure-cooker or ask your own question.

5
What's the minimum amount of oil for making popcorn?