How do I eliminate Corn Meal “grittiness”?

I recently made some corn bread on my own from scratch for the first time. The flavour was perfect as was the general firmness/crumbliness of the bread. However, the corn meal in the recipe resulted in an extremely gritty eating experience. It was like eating uncooked steel cut oats. But it's not like you can make corn bread without corn meal...

Anyway, every other corn bread I have ever had, whether it is made from scratch or from a pre-packaged mix, has not had this gritty quality.

I used a relatively fresh purchased package of yellow stone ground corn meal. It was open for about 3 days since I used a tablespoon in another recipe, but I stored it in an airtight container in the freezer (which is apparently what one should do).

Did I purchase bad corn meal? Is there something I can do to modify the recipe and make it less gritty?

Here is the recipe I am using.

I don't know the proper names for the different milling grades in English. I don't mean cornflour, which is pure maize starch from the inside of the maize kernel. I mean whole maize kernels milled so the particles are the same size as wheat flour. It is yellow and tastes the same way as the rough one, only the texture is different.

The two types of polenta differ in their water absorption and soaking times, so you may want to use a recipe developed for the fine milled type, or tweak your own recipe.

To give you a better example, here is what you need: 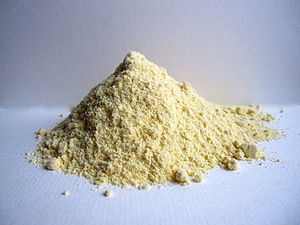 You don't want to use the rough form, which looks like this: 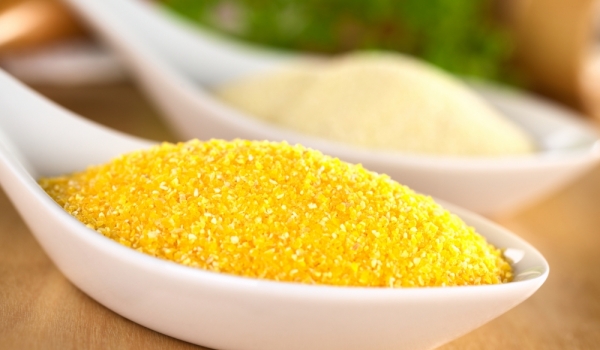 I use the coarse cornmeal because I like the flavor. I took my cue from the muffin recipe on the bag: It said to soak your cornmeal in the milk for 10 minutes. I did this for my buttermilk cornbread and it was delicious. I didn't add any extra milk.

You can soak the cornmeal in water overnight if you remember to reduce the water in your recipe to compensate for it. In your recipe, you can soak it in the milk and then you don't need to do any compensating.

I'd try letting the batter rest for a bit, like a 15 minutes.

It may be different from other things you've tried because of the coarseness of the meal that you've gotten. I don't know if there's any sort of regulation on the labeling for ground corn meal...

Just to add to rumtscho's response…

There are several different levels of coarseness of corn meal, from very fine (corn flour) to very coarse. If you want your corn bread to be less gritty, use a finer grind of corn meal.

(If you don't want to waste the corn meal you've already got, you can grind it finer in a coffee grinder.)

I use a coarse (polenta) grind cornmeal, and used to soak the cornmeal overnight like @Rob. Lately I've started pre-cooking the cornmeal instead. Mix the cornmeal 1-1 with boiling water, then microwave 3-4 minutes at 50%. Reduce any water/milk in the final recipe by 1/3.

First the gritty taste is the type of corn meal you purchased. Just purchase a fine milled corn meal. BUT you can make corn bread from Cream of Wheat. Yes corn bread can be made with other ingredients other than corn meal.

My grandmother could not eat corn meal because of an allergy so her doctor gave her the idea of cream of wheat use it just like corn meal in the recipe. It is lighter and taste pretty much the same.

Doctors also give this recipe to people suffering with any type of polyps in their colon as they are not suppose to have small seeds, nuts and also corn meal because it causes severe pain.

Of course being southern my grandmother only made corn bread in a cast iron skillet. She would add butter and touch of oil to grease the skillet put it in the oven or on top of the stove to get it screaming hot before pouring in the batter & baking it. That is how you achieve that really crunchy beautiful crust. The oven must be preheated well before making corn bread never put into a cold or warm oven because it will taste sort of raw tasting.

I actually hate corn bread. I was born and have lived my entire life in the south. I also hate ice tea sweet or not and will not eat fried chicken especially on the bone. I will eat boneless baked fried chicken in the oven. I also hate pecan pie, red velvet cake, coconut cream pie and southern cheap beer. I guess not everyone in the south is southern. lol But I can make corn bread like my grandmother for others in the family as well all other southern foods I don't eat!

I think I was suppose to be born some other place like France, Italy, England...Arizona, California, oh no a beautiful warm island that's it, an island. I love fresh raw fruits and vegetables. That's it an island.

and always use Butter milk.

Not the answer you're looking for? Browse other questions tagged baking bread corn batter or ask your own question.

8
Is It Possible to make corn tortillas at home without a press?
5
How can I modify corn bread recipes to accomodate a wet filling?
7
How to get cracks in my ginger molasses cookies
1
Will old corn meal ruin muffins?
3
How to find/substitute dry corn with shell removed for stews?
2
I made white bread yesterday, and it smelled similar to sourdough…why would this happen?
2
Use of sour milk for bread making - how long after the expiration date is it safe?
7
What caused the crust on on the top of my bread to separate from the rest of the loaf?
3
Is there a kind of food like bread that I can use to absorb sauce but that doesn't dry out so fast?