Is it safe to eat green onion slime?

I just harvested some scallions from the garden, where it's getting bit chilly (late November in Seattle).

After chopping them, I realized that their insides were covered in a gelatinous, slippery, viscous goo!

What is it? Is it safe to eat? 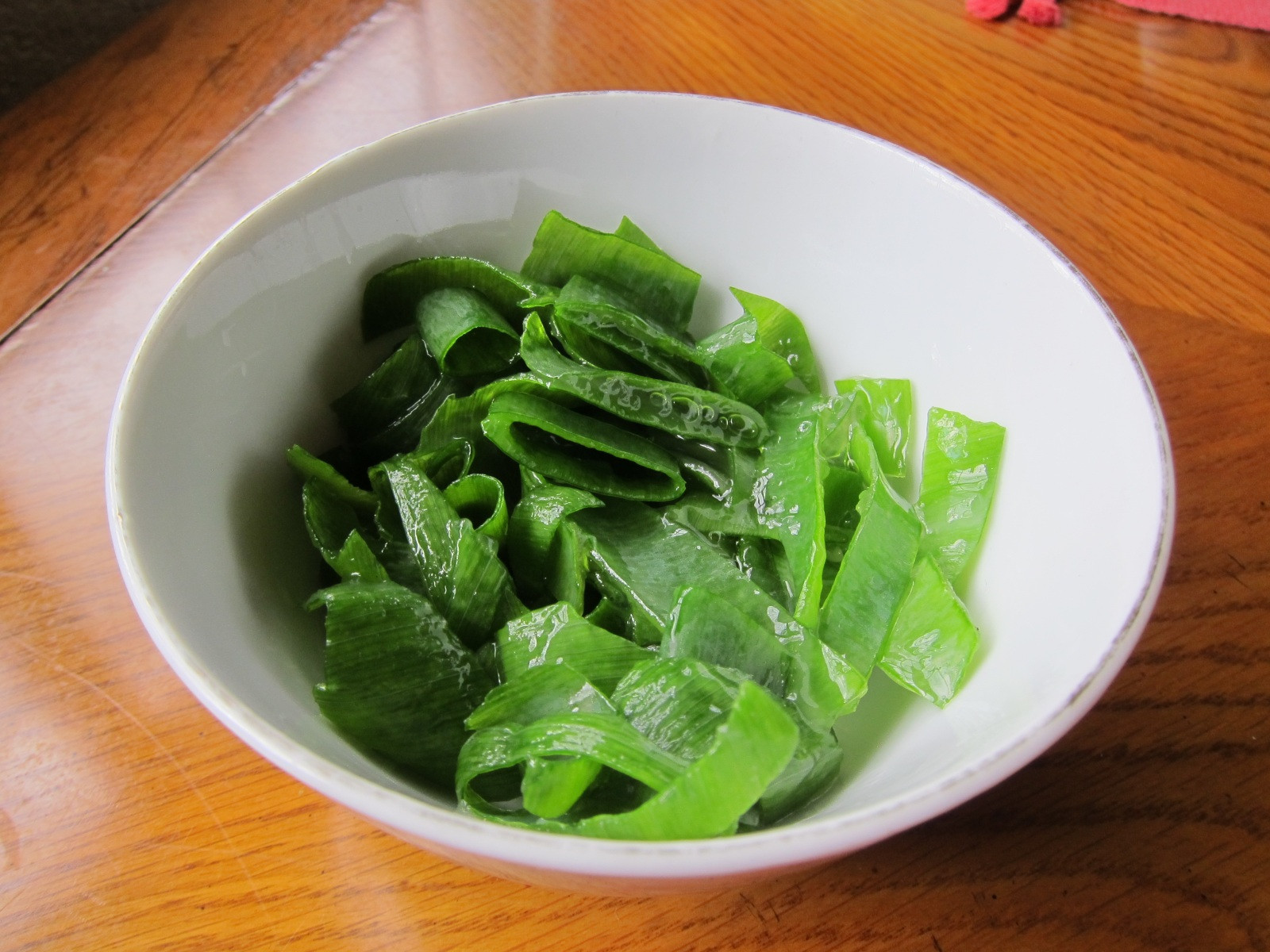 Normally, people associate slime with "inedible" because some bacterial colonies can build up slime on spoiled food. But there are plants which naturally produce slime, and it is as edible as any other part of the same plant. Slimes are most common in algae, but I have also seen them in other plants such as hyacinth greens, and scallions have it too, although in normally not that much. But if you mash a "dry" scallion or the greens of a typical yellow onion, they still feel slimy, while other alliums become slimy on cooking, for example leeks.

Physically, slime is just a special kind of gel. As long as it is not of bacterial origin, it is not a sign of spoilage, and it is highly improbable that a living green plant without signs of sickness will be full of colonies of spoilage bacteria. So, I would declare it good to eat.

I found an interesting discussion on the subject that is more anecdotal than hard facts but the consensus is that if the onions are fresh and not wilted or obviously spoiled, the goo is normal and edible, albeit a bit gross, and you can try just rinsing them thoroughly.

I believe it is how the plant stores energy for the winter etc. I've typically seen it show up only after a recent watering. so if the plant hasn't been watered recently before pulling up or cutting, you normally won't see that.

The older (more mature) green onions tend to accumulate a slimy mucus like coating on the internal wall as they get larger in size. Since I do not like the feel or appearance of the gel like substance, I slit the green shaft lengthwise . Then I thoroughly rinse the slime off then dry with a paper towel to remove the last remaining remnants of the goo. I then throw the onions into my soup pot along with the rest of the vegetables.

I believe this gel is naturally occurring in spring onions.It does look a bit yuk but just rinse it out of the hollow stems if you don't want to eat it. Nothing to do with G.M.O.

I have no idea what is actually inside the gel but I believe it to be plant derived. FYI The gel is on the inside of the plant NOT growing on the outside. I have been eating it forever because it is packed with green onion flavor! It's rare that green onions in the store have this gel because they are often more on the dehydrated side in my opinion or perhaps they are grown not to be so jelly because consumers might find it weird. I look at the gel as a delicacy and tend to use the gooier parts for cooking rather than the drier shaft if the recipe calls for limited quantities of green onions. I am perfectly fine. Not even have I turned a shade of green :-P

Another example that I can use for the seattle-ite is you know when you cut a fresh Washington state onion and it produces that white milk upon the first slice? It's the juices from the onion which is very juicy cause its fresh. You don't always see this with other onions because they are probably not that fresh even though they are perfectly edible and flavorful. Hope this helps!

When you've cut off the tops you can see down the tubes, if slime is visibly present then isolate and discard or rinse concern away, continue cleaning/prepping as before. Then you can move on too.

Lots of plants have gelatinous fibre.I'd check on this,but if it is,it's good for you.It grips to old debris in your intestine as it passes and cleans it out.

Yeah, I just discovered the clear gel substance in the organic scallions green shafts for preparing salad. For years we have eaten scallions, never saw gelatin inside the vegetable. I ate some of it after smelling the stuff. Appears to be a plant gelatin and the flavor is fresh with a very light scallion flavor. Still alive and kicking'. I believe this stuff is as nutritious as the rest of the plant.- Audrey Siani

The only time I've seen this slime is from the green onions I've grown myself, so unless the big companies are breaking into my garden and poisoning my food I think it's fair to say it's natural.

I have bin a chef for 35 years & have never seen slime like this on any of the thousands of green onion i have prepared until today .& anyone that tells me this is normal is lying,slime has bin & always will be a sign that the food is not eatable . In my opinion this is another product of food engineering (AKA: G.M.O) & that is something that no one in the world should be consuming or ingesting & should be avoided at all cost we should eating vegetables that are naturally grown in organic gardens & not this poison the big companies call food

Not the answer you're looking for? Browse other questions tagged food-safety onions or ask your own question.

2
Slimy inside of green onions

1
dark black furrows in sweet potatoes
3
Onion has yellow center. Is it safe to eat?
5
Is it safe to eat non-green tea leaves
6
What is the white goo in the middle of some hard-boiled egg yolks?
3
safety of "tin" cans dented in shipping
3
Salmon turned green - is it safe to eat?
0
Had my frozen hot dogs gone rancid?