How can brown stains be removed from pots and pans?

I haven't been cooking for long — recent college grad — so I'm doing a lot of experimentation and making a lot of rookie mistakes. One of them is shown here for your viewing pleasure: 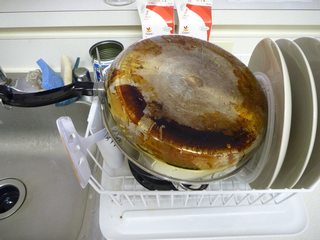 My mom gifted me this pan less than a year ago. She used it for over 15 years and kept it spotless the entire time, so I'm more than a little embarassed. I suspect that these stains were caused by stray drops of oil getting onto the bottom of the pan and getting burned on. Is that right, or were they caused by something else? I use an electric stove with resistive heating coils, if it makes a difference. And more importantly, how can I get this pan clean again?

I too use barKeepers Friend...love it. However, use a piece of crumpled up aluminum foil to scrub off the stain. It comes right off!

Bar Keeper's Friend in powdered form and some elbow grease will solve this problem. The first time you tackle it, it can be a real pain to get the pan cleaned up, but if you keep up with it regularly after that, it's not to bad. Great cleaning supply.

This is little off the beaten path, but try a solvent gun cleaner (not oil).

I recently (last week) caused a catastrophic burn on one of my skillets when I let it get entirely too hot before throwing a steak on it. After a few hundred cubic feet of smoke, a smoke alarm that sounded more like an air-raid siren, and a stubborn decision to let my steak cook anyway I was left with an interior that was about 100x worse than your picture. (The steak turned out perfect).

I tried the standard google recommendations of lemon juice, vinegar, and oven cleaner. They barely put a dent in it.

On a whim I grabbed a can of Birchwood Casey Gun Scrubber® Solvent / Degreaser, and decided to give it a try.

Wow! A thorough spraying, a steel wool pad, and a surprisingly little amount of elbow grease later the gunk was, I'd say, 99% gone. I still have a slight lightish brown tinge to my previously shiny surface, but I think that's as good as it's going to get.

Your profile says you live in Virginia, so there's at least a slight chance you have some of this. If not, you should be able to find some at a Wal-Mart.

Needless to say, wash it thoroughly after you've cleaned it.

My pan was All-Clad stainless steel. Guns are steel, and typically devoid of any aluminum parts. If your pan is aluminum I wouldn't suggest trying this, because I don't know what would happen.

I didn't think this answer would end up getting many up votes. Since it has, I want to stress that you shouldn't just use any arbitrary gun cleaning product you have laying around. You should make sure that it's strictly a solvent/degreaser. If it indicates that it "protects" in any fashion, then avoid it. A great many solutions include an oil based protectant. This is most certainly not edible. You don't want anything that leaves behind a residue. This stuff very clearly strips everything off the metal and evaporates very rapidly. Regardless, wash your pan very thoroughly afterwards.

Yes, these are from burned-on oil.

Steel wool should get it shiny again, with a little work. Note that this will scuff the finish of "bright" stainless steel.

This is the outside of the pan, though, so who cares? Even if you are careful, you will get similar stains again - they are pretty much inevitable. Consider them "battle scars" :-)

Edit: If the inside is non-stick, don't get any oven cleaner on that part.

If your pan is stainless steel, I've had great luck getting really bad stains off with and electric drill with a rotary wire brush. It's best to do it outside, since it generates black dust.

i used Weiman Cook Top Cleaner and a piece of crumpled up aluminum foil to scrub off the stain. Worked great...

Responding; I brought a spray from the dollar tree. Spray it on bottoms of stainless steel pans, let set for about 15 min., scrub with a steel scrubber. It should came right off, with very little pressure. NuLife Stainless Cleaner.

I like using Bar keepers friend or Bon Ami along with some super fine wet/dry sandpaper. I then scrub the pan along the grain of the metal. In most cases the pan's grain is circular, so I put some old wet towels and scrub away. On super tough stains I use a Japanese rust eraser, which has a mild abrasive and start to rub the pan, this is quite effective in getting rid of the burn on oil. If all else fails, there is always the oven cleaner spray, but only as a last option, it is quite toxic. I would rather just leave the stain on if it gets to the last option. Not worth it in my option. But if you really must have it clean.

Baking soda and vinegar worked really well on a stainless steel pan I burnt some veggie sausages on a couple days ago. Highly recommend his as the elbow grease required wasn't very much.

Not the answer you're looking for? Browse other questions tagged cleaning stainless-steel or ask your own question.

2
How do I get rid of burn marks in my pots?
11
Is Bar Keeper's friend safe to use on cookware?
13
How to keep my stainless steel skillet clean
9
Thick carbon layer on wok?
0
Stainless steel pan discoloration