What causes the texture difference between Greek style yogurt and regular yogurt?

In the US, Greek-style yogurt and regular yogurt are both made with cow's milk, yet they have a distinctly different texture.

When I described the texture of Greek yogurt to my nutritionist, she used the word "pithy". It, to me, feels like a thin layer of fuzz (like the skin of a peach) gets left on the surfaces of my mouth when I eat it.

Initial thought would tell me that it's because Greek yogurt has less water in it, but I made some homemade yogurt last weekend, using Greek yogurt for a culture, and despite being quite thin, it still had that pithy texture.

I would describe it as an almost chalky texture. Greek yogurt is typically strained 3+ times before packaging and in most cases is made from dairy with a higher fat content. The tang and texture are due to the whey being almost completely removed from the yogurt. The higher milk serum content (whey) in US yogurt makes it sweeter and obviously less viscous.

After creating a new batch using the same process as my first one, but with a different, non-Greek, starter yogurt (which uses a different set and balance of bacteria than the starter I used for my first batch), I found that the texture was the same as my starter yogurt and was without the pithy texture.

Therefore, it seems that it is, in fact, the difference in fermentation, which depends on the types of bacteria cultures in a given yogurt that determine the texture of Greek vs non-Greek yogurt.

Greek yoghurt (as sold by us) is obtained by means of final filtration, to remove the residual acidic water. Method to do it home.

Prepare before the yogurt using the machine normally, following the instructions. 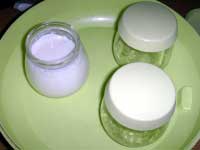 Place a strainer into a bowl. Place the strainer inside a tightly woven cotton cloth. 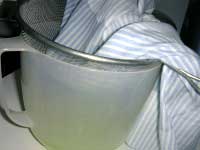 Pour the yogurt in cotton cloth. It does not matter if you just did, it is okay the next day also. 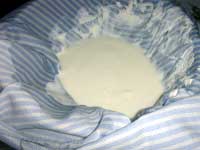 At this point, wait for the whey drip into the bowl, for a couple of hours or more. 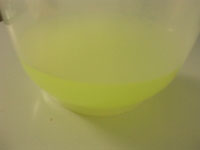 The whey is what gives the flavor a bit sour to the normal yougurt. In a couple of hours you get the thick yogurt. The more time passes, the more it becomes thick yogurt. After 4-5 hours, becomes like cream cheese.

During the filtering, every so often, it is good to reshoot the yogurt with a spoon, so that the more dense (that it lies in contact with the cotton cloth) not makes a "cap" to the more still in the surface.

PS By us in Italy yogurt is made with both, Lactobacillicus Bulgaricus and Streptococcus Debrucii. In addition we put probiotic ferments.

Although opinions are sketchy at best, today, in contrast to what is touted by advertising, it is believed that these two enzymes play no active role in the human body: in fact, they die as soon as they come into contact with gastric juices human, I can not stand the acidity

By the result of the positive feedback the use of probiotic ferments in the medical field, today some manufacturers have begun to add yogurt to their products. The probiotic ferments, unlike the Lactobacillus bulgaricus and Streptococcus thermophilus, are able to withstand the free acidity of gastric juices, to survive and replicate in the gastrointestinal tract. Since, generally, as bacteria already present in the human body, they are able to restore the bacterial flora to a normal state, when this has been compromised as a result of treatment with antibiotics, by stress or by improper nutrition.

The fermented milk obtained from their action deviates slightly from yogurt (traditionally obtained only with the use of Lactobacillus bulgaricus and Streptococcus thermophilus), giving rise, rather, to a Kefir. 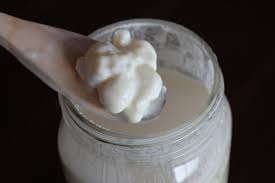 Not the answer you're looking for? Browse other questions tagged yogurt or ask your own question.

10
What is the difference between Greek yogurt and plain yogurt?
8
Should I refrigerate homemade yogurt before making Greek yogurt?