How can I make my fried potatoes not fall apart?

I cut the potatoes up. I boil them for 7 minutes and then I fry them 15 min in some olive oil, but they fall apart quickly.

When I remove the water from the boiling pan after 7 minutes, the potatoes are already almost falling apart.

I have tried to fry potatoes without bowling them for a while, but they still weren't done.

How do I get the potatoes not to fall apart and get at least a bit crispy? 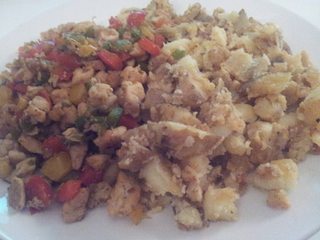 A few possible ways, which can, of course, be combined:

I think the clue here is that your potatoes are almost disintegrating after you've boiled them. If they're doing that, then they will only continue to disintegrate when you sauté or shallow fry them, which is what I assume you're doing and that will happen regardless of the type of potato you're using.

As others have rightly stated, some potato varieties are less inclined to 'disintegrate' than others, but moving to a waxy potato (firm) may stop the potato disintegrating but it may also not give you the texture you're trying to achieve - crisp on the outside and fluffy on the inside.

I my opinion you're better off sticking with a 'floury' variety of potato, but modifying your cooking technique to prevent disintegration. I'd suggest trying the following -

They should not disintegrate but should crisp on all sides and be fluffy in the middle.

After you've par-cooked your potatoes, cool them rapidly in iced water, drain them, and then let them cool, preferably in a fridge, uncovered, for a few hours.

When you want to 'fry' them (NOT stir-fry!), use an high smoke point oil, such as vegetable oil - or if you want a really tasty potato, in beef lard, at about 190C

According to Kenji Alt at Serious eats, in his article on French Fries, a small amount of vinegar in the par-boil water--one tablespoon per quart--will cause the fries to hold their shape by inhibiting the breakdown of pectin.

The same technique should be very effective with fried potatoes: par-cook the diced potatoes in the weak vinegar solution. Then sautee them to finish for crispiness and color.

Here is what Kenji Alt says:

The fries boiled in plain water disintegrated, making them nearly impossible to pick up. When I added them to the hot oil, they broke apart even further. On the other hand, those boiled in the vinegared water remained perfectly intact, even after boiling for a full ten minutes. When fried, they had fabulously crisp crusts with tiny, bubbly, blistered surfaces that stayed crisp even when they were completely cool. As for the flavor, if I tasted really hard, I could pick up a faint vinegary undertone, though I wouldn't have if I didn't know it was there. Even knowing it was there, it wasn't unpleasant at all. After all, I'm used to putting my fries in ketchup or mayo, both of which contain plenty of acid.

I once had a Chinese dish they called "Fried Potato Strings", where they have the potato sliced in thin long strings then stirred fried. The potato strings turned out firm, very crunchy and far and from falling apart. I tried this back home but just ended up getting the potato strings and pieces all meshed up.

I went back and asked how they did the trick. So basically you have to wash the potato slice to remove the starch content as much as possible on the surface, before cooking; don't forget to hand-rub the potato in running water for some minutes. The potato should be cooked in higher heat and adding a small dose of white vinegar also helps it further.

I tried and it worked. 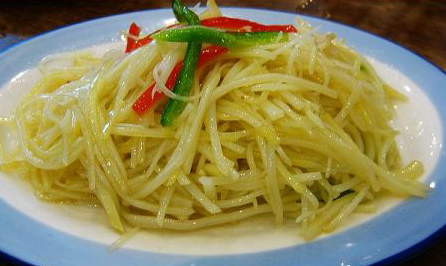 When potato pieces cook, they release moisture. If they are clumped together in a pan, the moisture will become steam and you will reach full cooking before the pieces become dry enough to brown and crisp. The result is crumbling pieces, especially with the starchy variety you have. However, if you ensure low moisture content prior to frying, then the potato pieces will be able to brown and make the nice crust that you want, and as this happens the pieces will “glue” with their neighbors like you see in a hash brown.

As others noted, the solution is to pre-cook your pieces in a way that allows moisture to escape. This can be done by parboiling or microwave, but the important thing is a cooling and resting period afterward.

After boiling the potatoes, make sure you drain them and let them cool before frying. They solidify and dry as they cool. Avoid stirring too much when frying.

Try frying raw potatoes in enough oil (I usually pour ~0.3 cm of oil for a full pan of potatoes) on medium-high or high heat WITHOUT the lid and WITHOUT salt/pepper. Stir them not often (but don't let them burn, indeed) till they are crispy enough on all sides. Then reduce the heat to low and keep potatoes under the lid till they are cooked enough (you should be able to "cut" them easily with a spoon or fork). At the very end add salt/pepper to taste.

I never boil potatoes before frying them. Red potatoes, imo, offer the best texture (they are firmer than many varieties) and taste. Scrub them, chop them, add them to a large saucepan or wok with 1/4 - 1/2 cup of heated oil, add seasoning, and stir/toss them periodically until they test done. This will result in a potato that is crispy outside and tender inside.

I boil potatoes whole (the potato out of the bag scrubbed) for 10 minutes. Then I put them in a colander for 15 minutes. I then hold them under cool water and the skins come right off. I then cut them up into squares.

Next fry some bacon in the pan you will be cooking the potatoes in. Set aside. Add some butter (1/4 stick) then add potatoes when the butter has melted and is good and hot. Fry until they are almost cooked through and then add chopped onion and red pepper and cook 5 minutes more.

I assume you are boiling your potatoes pre-cut? (7 minutes is a really, really short amount of time for your potatoes to be almost falling apart!) If so, try boiling them in larger chunks and cutting them after the fact. I believe they should still be quite firm by the time they hit the pan.

9
How to prevent fish disintegrating in frying pan
7
Maintaining crispy fried potatoes while cooking with onions and peppers
6
Why didn't my pan-fried potato wedges turn out crispy?
1
How to store cut potatoes for the morning?
2
Dauphinoise potatoes: not fully cooked in cream?
9
How to roast potatoes in the oven to make them crispy?
0
Can any potatoes be cooked in the microwave?
7
Does squeezing out liquid from shredded potatoes significantly reduce cook time?