How to minimize splatter using an immersion blender?

When I use my immersion blender (for soups etc.), I always have a lot of splatter. Is there a way to minimize this splatter? Is it better to put the blender on and put it in the to-blend substance or the other way around? Are there other tricks?

First, use the highest-sided, smallest diameter container available. The food you're puréeing should have several inches from the top of the container. If the diameter is small enough, your blender will be able to get all the food moving at once -- you'll get a nice vortex right in the middle, and won't have to do any horizontal movement, just vertical. (Essentially the same thing as would happen in a counter-top blender's jar.)

The absolute best container is what's known as a "bain marie", a cylindrical metal pan that's much taller than it is wide: 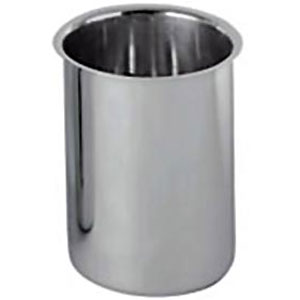 You can get these fairly cheaply at restaurant supply stores. It's not absolutely essential, though, and if you don't want to buy one, use your pasta pot or stock pot.

Next, always turn the blender on and off while it's in the food, and keep the blade and its hood submerged. You should be able to move the business part of the blender near the surface, but keeping it a good inch or so underneath, and have the food at the top being sucked under and into the blade. Bringing the blade to the top, so that it's partially in the air, is all but guaranteed to splatter.

Start blending near the top of the container, then slowly and smoothly move your way down and back up. If your container requires you to move horizontally, do the top "layer" before moving downwards.

If you have speeds on your blender, go through all of the food on low, getting it uniformly chopped up before raising the speed. If you have especially chunky food, it will take a while on low before it's safe to raise the speed without splashing.

It will occasionally happen that the blade isn't making contact with the food, especially if you get too near the bottom or it's something especially thick that you're trying to purée. It may feel like the blender "grabs" the bottom of the container -- I guess there's some kind of vacuum forming, although that doesn't quite make sense to me. The motor will start going too fast and the vortex, if you had one, will fall apart. You can usually get it restarted just by tilting the mixer, but you may have to stop the blender, go back to the top, and begin again.

Cut a hole in a paper plate and put the shaft through the hole. The plate will act as a lid.

Not the answer you're looking for? Browse other questions tagged hand-blender or ask your own question.

4
Is there a hand blender with a metal coupling connection?
5
Are plastic (vs metal) immersion blenders safe for hot mixtures?
3
Carrot soup and avoiding the use of a blender?
0
onion puree thickness
1
Avoid ice crystals in frappuccino
3
Blending pastry cream right after cooking: does it change final consistency?