How to cut beef tenderloin into Filet Mignon

I bought a chunk of tenderloin and made several Filet Mignon out of it. I had a hard time cutting the filet into parallel shape with relatively smooth surface, like those we found in fine restaurant. 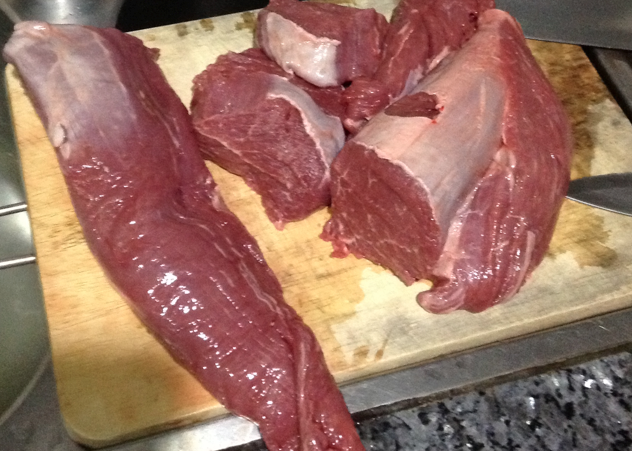 Because the tenderloin is just so tender and soft, the meat deformed as I applied the knife pressure, and even further as I cut through it.

Are there some techniques, or specific tools to cut steak out of tenderloin or tender piece of meant in general?

You should apply as little knife pressure as possible in order to keep the meat from moving as you slice. I can offer a few suggestions towards that end.

First you need to take the translucent white stuff off. That silverskin is much tougher than muscle and is probably making you use too much force as you cut through it. You also don't want it on your medallions, and it's much easier to take it off the whole tenderloin than the smaller portions.

Get your filet/boning knife and use its tip to get under one end of the silverskin, then lift up the flap and slice just under it, keeping your knife more or less flat and parallel to the table. The silverskin will tend to come off in strips -- it's made up of long lengthwise fibers. It is fairly strongly attached to the meat, so don't try to tear it off; use your knife to separate them.

At one end, it'll dive into/merge with the muscle -- you can see this in the large piece to the left in your photo. You'll probably end up with a little divot there; don't worry about it. The silverskin is waste -- it doesn't have any flavor and is impossible to chew -- so just toss it.

Next, you should use the sharpest, narrowest, and longest blade that you have (those are in order of importance, so if your chef's knife is way sharper than your slicer, use it). Your knife should be sharp enough that you don't really have to press down at all in order to cut the meat -- the weight of the blade should be providing enough force. The cuts you make will be the same as if you were slicing a roast. Use the longest possible stroke, smoothly moving the entire length of your blade through the cut. Generally, cutting by starting at the base of the blade and pulling towards you will allow the smoothest movement. If you don't make it all the way through in one stroke, restart the cut from the base of the blade as many times as you need to, rather than following with a push cut. (On the last little bit, to completely separate the portion, you can get away with it, though.)

Finally, there are two possibilities for the position of the tenderloin and your hands relative to each other. You should try them both to see which produces better results for you. You can portion either from the right or left end of the meat. (Assuming a right-handed knife wielder,) portioning from the left involves pressing your free hand against the cut face of the meat (where you separated the last medallion), supporting it. This is the way that sashimi is cut, and I find that it makes it easier to get evenly-thick and consistently-sized slices.

If that doesn't work for you, and you're still having trouble getting smooth faces to the medallions, you can cut from the right end, and use your free hand to squeeze or compress the meat (not too hard, though -- you don't want to damage it) to hold it still while you cut. In this case, grab the tenderloin just past where you're going to make the cut.

Ultimately, though, don't worry too much about the face of the cuts. Any unevenness less than about 3/16 of an inch won't even be noticeable once you've put a nice sear on it.

Put it in the freezer for 30-45 minutes before you cut it. That will solve the problem!

Not the answer you're looking for? Browse other questions tagged steak cutting or ask your own question.

1
Should I not sear and broil eye of round the way that I do filet mignon or chuck tenderloin?
1
How to choose non-alcoholic beverage pairings for filets mignon?
15
Is there any cut of beef that's close to Kobe beef?
9
How do I pick the best fillet mignon at the supermarket?
6
How to cut peanut brittle
4
How to Sous Vide Filet Mignon to Medium Rare
1
How do I properly cut a bell pepper into strips?
1
How do I properly cut a bell pepper into a medium dice?
1
Should I write Steak or Beef Tenderloin on the menu?
18
Is it bad to be a 'board tapper', i.e. to tap your knife rhythmically when you're cutting vegetables?