What are the natural and artificial sugars?

I try to be careful to avoid hydrogenation and artificial sugars when I buy food products. Hydrogenation seems easy - if it mentions hydrogenation in the ingredients list, I avoid it. I feel more confused by sugars.

The problem is that there are so many sugars that I have trouble keeping them straight. Sucrose, glucose, maltodextrine - those are chemical names, to be sure, but to my knowledge they are "natural" in the sense that they are naturally derived. I think.

Can someone post a list of the various sugars that we see in ingredient lists - or that we have the option to use as ingredients in the foods we make - with an explanation of whether they are natural or not? Or to what degree they are not natural?

Now, I understand that "natural" means different things to different people, so I expect some qualification will be needed for at least some ingredients. Also, to narrow the focus of the question and the resulting answers, let's keep this focused on the list and short description of the various sugars as opposed to the broader discussion concerning whether artificial sweeteners are bad for you or not.

I guess this isn't a very popular question. Perhaps people who care about this as I do generally understand the ingredient lists better?

So today I ran into an example of what I'm describing above. I noticed polydextrose in an ingredient list. What I would have liked to do is come back to this question and look at an answer to this post that has that ingredient as artificial or natural with a brief description of it. However, this isn't in the incomplete list of artificial sweeteners posted in the answer by TFD (I don't mean for this to be offensive - at least you answered with something, which I appreciate). Not being a dietician, I looked it up and it looks pretty artificial to me.

Is there someone out there who is passionate about this stuff who could post such a list for the rest of us?

Sugar, as in common table sugar from sugar cane, is sucrose, which is a chemically weak linked combination of glucose and fructose. Your stomach acids will split sucrose very fast. So the difference in using natural cane sugar and factory split glucose may only be a matter of minutes once you eat the stuff

Same goes for almost all the sugars other than the "artificial sweeteners" which are generally not sugars at all, they just taste very sweet

Some artificial sweeteners are very natural in the general scheme of things when compared to processed sugar etc.

Nearly everything that comes in a packet with a barcode is not "natural". White table sugar is not natural. Buy some sugar cane stem, and crush and boil it, then you can see the difference

I would rather use the white table sugar though, as it is more likely to be clean and tested as being non-contaminated

There is a great list of sugar substitutes including artificial sweeteners on Wikipedia. Many of which would be better for you if sugar levels was of a concern in your diet (it is for some people). Many are useless in baking

And the sugar alcohol's, which are also a form of "artificial sweeteners" 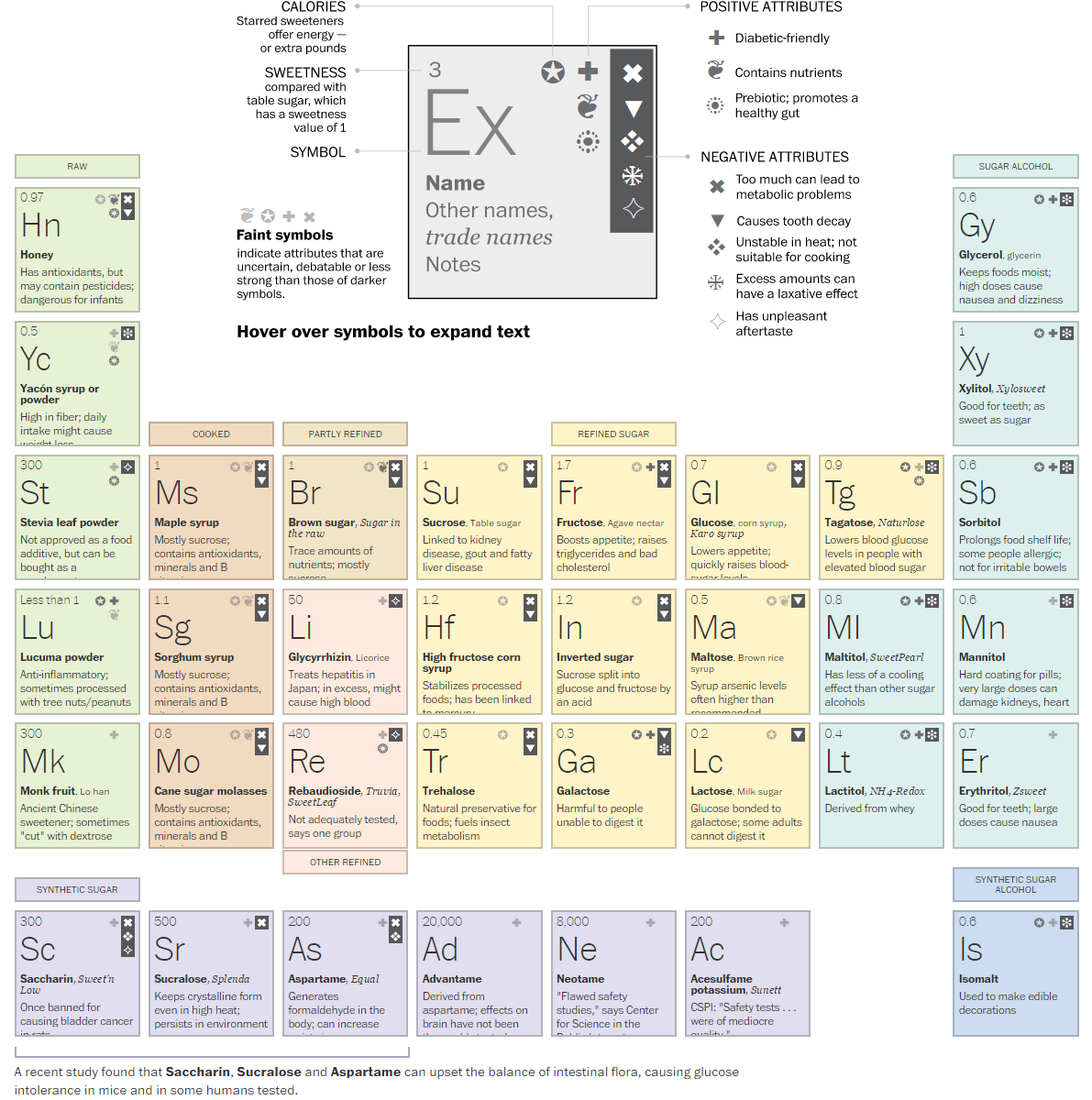 Natural or artificial is a matter of how something was produced, not what it is and even then the distinction is fuzzy at best. Nutrition on the other hand is a matter of what it is regardless of how it got to be that way. (Process obviously can impact the result, but it isn't necessarily so)

Highly refined apple juice is a syrup of 45% fructose and 55% glucose in water and can be produced purely mechanically from apples.

HFCS 45 is a syrup of 45% fructose and 55% glucose in water. It's produced by heating corn starch with a weak acid to split it into glucose, and then treating that with an Xylose isomerase, an enzyme produced by certain bacteria to convert the glucose into fructose.

Glucose and fructose could also be produced from petroleum although it's more economical to grow them. That could be combined with artificial water produced by burning more petroleum. The only real difference would be that it's less radioactive since it would have less Carbon-14.

Glucose-fructose syrup is glucose-fructose syrup regardless of how it was produced and has the same nutritional value (For good or ill). The only thing that would impact it is changing which stereoisomer of glucose you used, but L-glucose is not practical to produce in food quantities and no known terrestrial life produces it so you only encounter D-glucose/dextrose in practice.

So there's no comprehensive way to make such a list. A product might list "Fruit Juice" as an ingredient, and it would just be a somewhat more expensive substance identical to high fructose corn syrup. What one person considers "natural" or "artificial" isn't the same as what another person thinks, and the criteria can even vary for a person depending on what they are looking at: The process for making HFCS isn't all the different from making alcoholic beverages or tenderizing meat with fruit enzymes, but we've been using Yeast and Papaya longer than we've been using Xylose isomerase so the latter is less familiar.

Of course none of that means there aren't problems with excessive consumption of simple sugars (Or anything else), but it has nothing to do with HFCS being "artificial". HFCS isn't poison and juice/honey isn't the elixir of perfect health.

Fooducate has compiled such a list of artificial sweeteners and sugar synonyms:

Not the answer you're looking for? Browse other questions tagged sugar or ask your own question.

5
What are the advantages and disadvantages of various sugars/substitutes?
3
Does sugar inhibit mold growth?
7
Does using powdered sugar instead of granulated sugar make cookie dough drier?
0
Can cooking or processing generate more natural sugars?
2
Impact of different sugar types (and substitutes) on ice cream
2
What do I search for when looking for unsweetened recipes?
3
Correlation between perceived sweetness and sugar content
4
Proper way to calculate the amount of sugar in a drink
9
How to adjust for making candy from corn syrup instead of sugar?
2
Sugar content of food