I was wondering - is there a way to make it less sour, that is not increasing the sugar and honey content?

I made a sauce using the ingredient ratios specified in the question. The sweet and sour in this sauce actually balanced each other and I thought this might invalidate any experiments until I considered that they also dominated the flavour of the sauce. In other words the sauce was a little too tangy (or tart if you prefer).

For the purposes of this answer, I'll make the following distinctions:

Note that I don't suggest that this is the accepted nomenclature. I think it is possible that the OP confounded sour with tart which may explain the specification of no additional sugar in the question.

Colour as a sweetener

As the Wikipedia article on Sweetness says,

The color of food can affect sweetness perception. Adding more red color to a drink increases its perceived sweetness with darker colored solutions being rated 2–10% higher than lighter ones even though it had 1% less sucrose concentration.

The colour of this sauce became much duller during cooking, so I tested the effect on taste of using a green food dye. I didn't notice any difference in a side-by-side taste-test, even though the sauce with food dye did look much nicer, 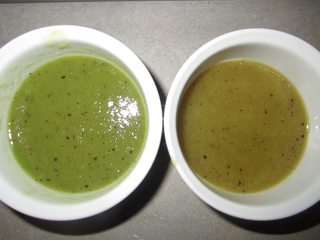 I did one more test adding more dye and this time, to my surprise, the sauce with the more vibrant colour tasted very slightly, but nevertheless distinctly sweeter than the original. 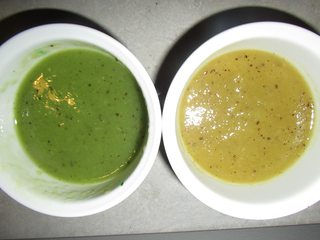 I didn't quite believe this, so I taste tested this several times with the same result.

This led me to suspect the food dye itself and, sure enough, it tasted sweet due to an amount of glycerol in the ingredients. Despite invalidating my experiment, glycerol is neither sugar nor honey and as such answers the OP's question directly (if indeed the sauce was sour and needed sweetening). Adding to that the fact that the sauce now looks more appetising, I can recommend using green food dye whether or not colour has any effect on taste.

I also tested the suggestion of another poster, where salt is used to sweeten the sauce. I didn't hold out much hope for this technique, having experimented with salt on all manner of fruits a couple of days back.

Once again, I was surprised. Salt made a positive difference, although this time the sauce was no sweeter than before. Quite the opposite; sweetness was reduced (which is consistent with my earlier experiments). The sour note was also reduced, so sweet and sour were still balanced leaving the sauce tangy but not tart.

I adding a pinch more salt and now the salty taste came through and ruined the sauce.

I recommend adding salt if the sauce is similar to mine and excessively tart rather than actually sour. It is easy to overstep the mark when adding salt. I suggest making a little more sauce than actually necessary and putting an amount aside before adding the salt so that you can re-introduce some if you do go overboard.

Finally I tested the advice to thin-out the sauce with water. This was the least promising result and it seems to me that sweetness disappeared faster than the sour taste. I tried various dilutions, but nothing compared well to the original and flavour was lost.

Possibly this could work if you dilute the sauce with something more flavourful than water, but I would recommend the other two methods over this if you want to stay true to the original recipe.

The answer lies in the kiwi. Choose a ripe kiwi - they are typically sweeter.

Another option you may want to do is to dilute your existing sauce with water and add more cornstarch.

I actually made a fruit sauce with some very small plums from a tree on my property. I added a lot of sugar and honey and it was still tart, so I added a little salt, which cut the tartness a bit. I'm afraid to add too much salt but still gave a lot of tartness. I'll let it sit and cool overnight and then retaste.

3
How can I get more lime flavor into my key lime cake recipe?
4
Can salt make sour fruit seem sweeter?

2
What is the cranberries/sugar ratio used in the American cranberry sauce?
2
How can I make this wine and bacon sauce into a thick liquid?
8
What can I use instead of Sriracha if I only want to make a dish non-spicy, but similarly flavorful?
0
How do you make sauce for a Thai dish such as Chicken Pad Khing?
1
How can I make a "lighter" cheese sauce?
0
can whole milk with corn starch be used to make caramel sauce?
1
How can I cut the flavour of Worcestershire sauce in a completed Asian dish?
3
Make a buttery sauce less oily
1
Is there a way to make a generic cheese sauce?