How to make yogurt without any existing yogurt

How does one make yogurt when there isn't any existing yogurt to use as a starter?

There are various bacteria that can make yogurt. They ferment milk at warm temperatures and are called "thermophilic" for that reason.

These bacteria were cultivated by millenia ago. I assume by having milk accidentally spoil to something that didn't kill the starving person who ate it.

Tasty thermophilic lactobacilli do exist in the wild but so do plenty of other very untasty bacteria that would love to eat the lactose in your warm milk. You can't just let warm milk spoil and hope you get yogurt bacteria. The only way to be sure is to not get sick when you eat it.

Getting yogurt starters is very easy.

Any yogurt from the store that contains "live active cultures" can be used as a starter. Yogurt starters can also be purchased dried online.

Once you have some yogurt, and won't be making more for a long time, you can save a little dried or in the freezer.

It is possible to use pepper stems to create a yogurt like product. They place the stems of hot peppers in prepared milk (heated to >70°C) for 12-24 hours at incubation temperature (40-45°C), after which time it solidifies. The stems are discarded and further batches are created with the product.

I myself have tried once with one stem from a sweet red pepper but I didn't dare eat the result and didn't try making further batches beyond the first one. One worry I had was that there is some question as to whether it is bacteria living on the stem or pectins from the pepper stem itself that create the "yogurt."

In the ancient times nomadic turkish tribes were making yoghurt via leaving the first boiled and cooled (around 43-44°C) milk in the forest or via adding the collected dew from the forest early in the morning and adding this to the boiled and cooled milk. In the modern times, in Turkey now, one of the ways to make yoghurt without using yoghurt is to add boiled chickpeas into the milk (43-44°C). Boiling milk is important if you are using raw milk because it will have plenty of other bacterias but for making yogurt, you only need two. the ratio for the chickpeas are 3 chickpeas per half a liter of milk. hope this helps. if you are interested in creating new tastes you can use or mix goat, sheep and buffalo milk into cow milk (that is also how it was done in the ancient nomadic tribes).

I put 1/2 cup rice in the water for 10 minutes, then separate the water and mix it 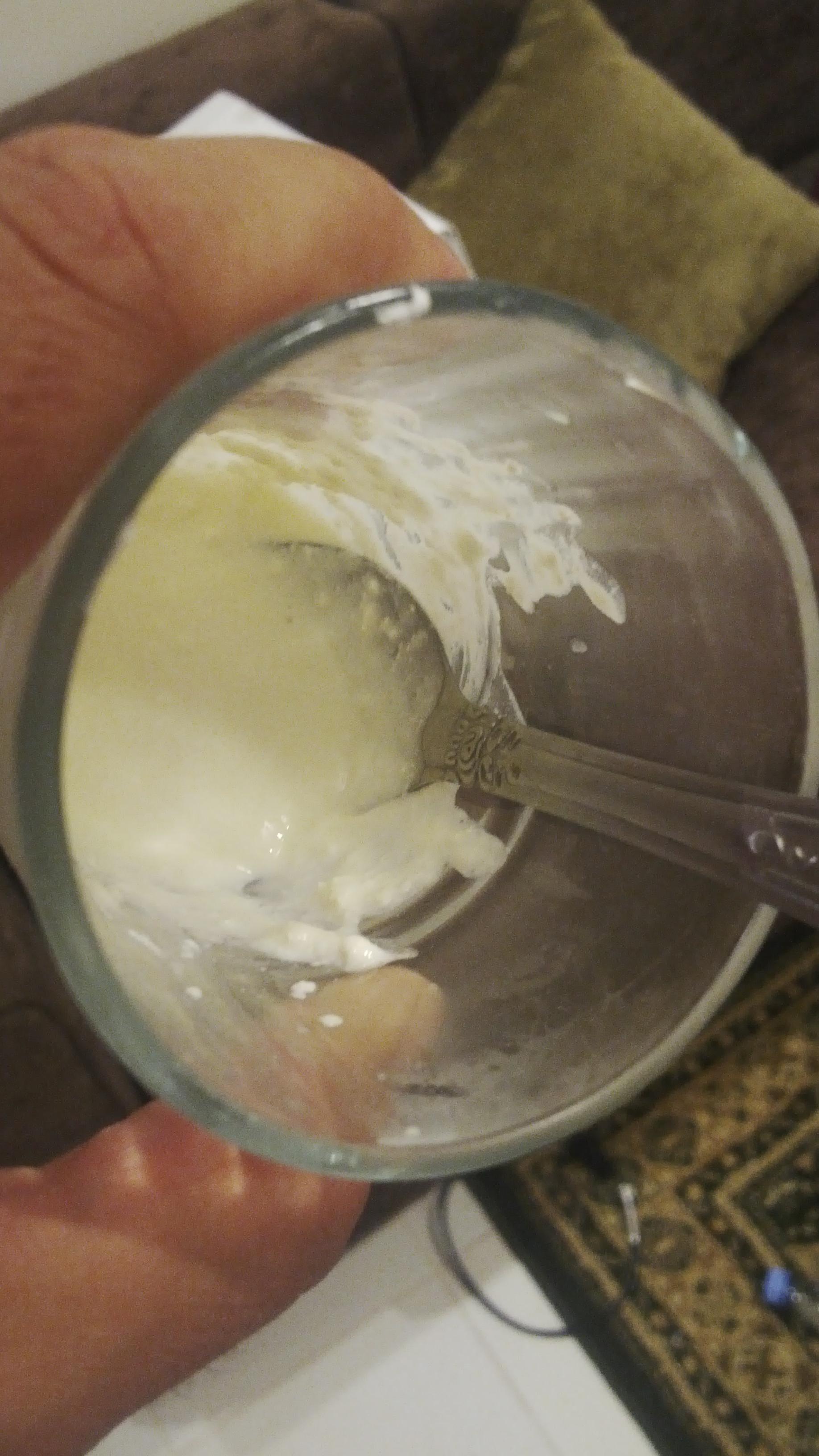 with hot milk... after fermenting for 3 days. I open the container and it is smelling like cheese but have a nice quantity of yogurt mixed with lactic acid... then separate the yogurt and use it as starter to make more yogurt but good smelling like cheese in yogurt shape.

I once made yogurt (or something very similar) by leaving a small bowl of milk out, lidded with a slice of bread. I should mention that my mother, who found it, makes her own yogurt from scratch - so when she said I had made yogurt, it must have been very similar to yogurt, indeed.

Of course, an anecdote is not proof, thus the need for further research. Bear with me a bit, this sent me researching in circles.

Bread has been used as a yeast starter for beer, historically - can't find the article I first read it in, which had it used as an alternative starter in the case of no beer yeast, but this one also (briefly) mentions it as one of the oldest methods, and this one gives a modern recipe for the same. Not that beer yeast is yogurt culture either, but it does suggest that bread can act as a controlled inoculate.

So, on to sourdough. Sourdough generally does have several lactobacilli strains in it, it's one of the things that makes the dough sour. Similar strains, lactobacilli, are used in various fermented pickles - often referred to as lacto-fermented for just that reason, sometimes whey is even used as a starter. And because of this, there are questions about the using sourdough starter and the bacteria fermenting the pickles, or making fermented beverages, or starting yogurt. Didn't see real answers, but people (in comments) saying it sounds plausible and might be worth trying.

So, using sourdough as a starter, or a slice of bread, may be a plausible way to start off a batch of yogurt. Using some of the liquid from lacto-fermented foods (many of which do not require external starters) may be another way. And, even if the strains of lactobaccili are not the same ones usually used to make yogurt... I would guess that since these strains produce safe, edible, fermented foods, it is reasonable to think the product of fermenting the milk would be safe to experiment with (if not necessarily palatable, if the strains are very different).

Your risk tolerance may vary, of course, but in your post-apocalyptic world with no alternatives, it may very well be worth the experiment if done with due caution because preserving milk in this way is very useful. As long as you're also aware in our own pre-apocalyptic world, using various store-bought starters (yogurt, kefir, probiotics) is a safer choice.

Another thought - most wild yeasts end up making products with the sour notes (like sourdough) that means lactobaccili are present. So it may be reasonable to think that yeasts and lactobaccili often hang out together. Sources of wild yeast, then, may be another potential avenue for lactobaccili starter - including the surfaces of fruits like apple or grape, or using raisins or cider, potato water, kefir, etc. Grains are also supposed to be a source, one reason why bread (and sourdough) is used - but the mashes used for beer-making, or other grain dishes, may ferment and produce lactobacilli.

And final thoughts. Sourdoughs use a prolonged process to help insure the right strain gains dominance (or that if it does not, one knows and can start over). It may be possible, once one has a potential starter, to try something similar - maybe going through several tiny batches (each started from the previous) and checking if each one looks like good yogurt and seems to cause no problems, to give the strain culturing the milk to a decent-looking yogurt plenty of chances to out-compete foes before chancing larger batches. It may even be possible to make an actual sour...milk starter, that is discard and add fresh to your culturing starter, just like sourdough, to give the right bacteria a good chance to get hold.

Also, among the sources for wild lactobaccili - are the cows themselves, especially raw milk. Leaving raw milk fermenting may be a safe-ish method to get a starter - just like apples will usually ferment to cider because the yeasts doing so are present in the apple skins. Again, in the post apocalyptic world you're imagining, having milk (and thus a source for said milk) may mean you also have a source for lactobaccili.

MAKE YOUR OWN STARTER AND NON DAIRY YOGURT

Vegan Richa has a recipe to make your own starter in her book. It's easy and all you might not like is what I prefer - these are non dairy yogurts like coconut, almond, etc.

For example she says she uses a probiotic yogurt starter:

Warm the milk over low heat just until lukewarm - mix in probiotic - transfer to glass bowl or jar. Cover let sit in a warm place for 6 hours. Refrigerate and use w/in 3 days to start yogurt.

You will have to buy the book to get the rest...ALL SIMPLE :)

Its simple ,use dried whole red chilli in the warm milk and keep it to setin warm place.

Dried Red chillies have same bacteria as required for curd/yoghurt

My grandmother used to say that you could make yoghurt the same way that homemade buttermilk is made - add a few drops of lemon to the warmed milk and let it ferment overnight. This would aid the multiplication of the necessary bacteria for the yoghurt.

Chickpeas is the way to go. Get 15-20 chickpeas, crush them with garlic crusher, put them in 1.5 glass pasteurized milk heated to 40-42 degrees. Wrap the glass in a cloth, towel, etc. leave in a hot place for 24 hrs. There is your culture now.

I’ve been searching this exact topic and I’ve found, what might be a definitive answer.

The following link is a research publication, published in a food science journal. Pilot study on chilli stalks as a source of non-dairy lactic acid bacteria in yogurt making

Long story short, they recommend chili stems as a non-dairy Lactobacillus source that can ferment yogurt.

just pour the milk to the jar and seal it airtightly ,loose the seal after 12 hours ,you need to warm the milk first before pouring it to the jar ,you dont need starter at all ,you just need the milk alone .

i dont make this with starter of any kind just only milk but i cant upload the pic to this site i dont know why :(

Not the answer you're looking for? Browse other questions tagged yogurt starter or ask your own question.

5
Homemade Yogurt Nutrition Info
2
How can I know when my yogurt is ready (in a generic, basic, non-us yogurt maker)?
3
Beans Cultured with Yogurt
6
I'm trying to make yogurt, but it won't turn out. Can someone help?
10
Home-make yogurt: add sugar / something else with the starter?
2
I failed to make yogurt, what have I made?
9
Do commercial yogurt starters (i.e.: store-bought yogurt) actually degrade over time?
1
Homemade yogurt
20
Why is DIY yogurt not as stable as sourdough starter?