How can I roast hominy while minimizing the popping?

I am following this recipe for roasting hominy/posole. Basically, toss with oil and seasoning, bake at 400'F for forty minutes stirring every ten. I am not sure if the recipe intends for popped hominy, or roasting it, or if the recipe author differentiates the two. I am thirty minutes in and they look like this thus far: 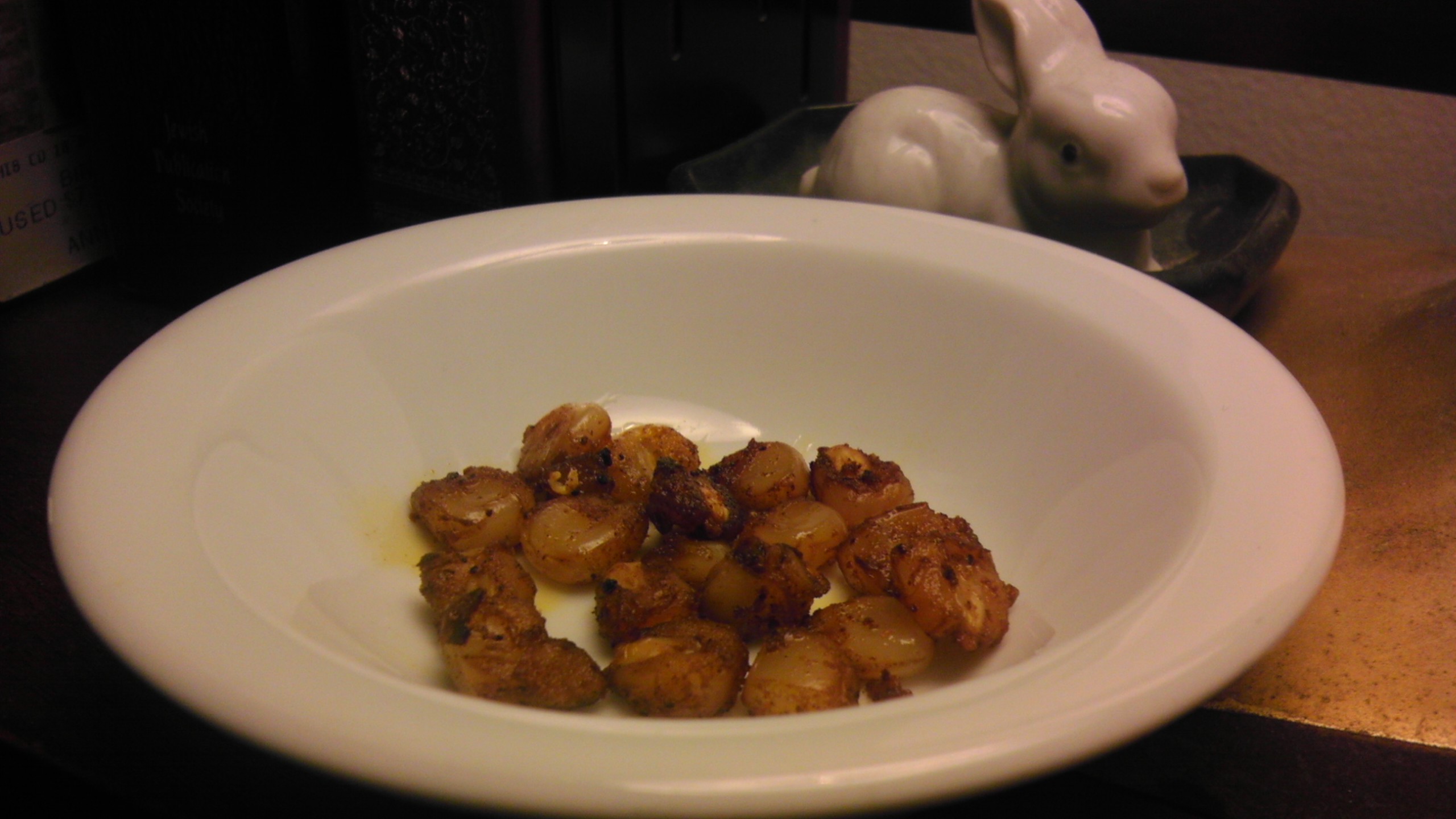 The hominy has a nice texture, not yet quite corn nuts but pleasantly chewy. All of the reviews speak to the intense popping. While I assumed this would occur to some extent, after thirty minutes it was too much and I had to pull them (too many were hopping to the bottom of the oven).

Currently I am intending to use the hominy in a chili, so the texture they are at should be good. However, I would like to find out if there would be an approach to solving the following two issues:

To roast hominy, maximize hardening of spices, and roast without popping:

Removing the hominy, I used a large sheet of parchment to shield myself from stray hominy shrapnel, then used it on top to keep kernels in place while cooling (I didn't want to use foil as I wanted to avoid insulating the heat):

Well, since you asked for it, with a warning that I've neither cooked nor consumed roast hominy:

If you cover the pot with something that doesn't let steam out, it might slow or prevent the roasting. A stainless steel mesh would let the steam out while also keeping the kernels in. Alternatively, you could use some heavy-duty foil with a lot of small holes poked in it. You could probably also shake it instead of stirring, since the kernels will be contained.

As for preventing popping, I'd guess that dehydrating the kernels first would help. Certainly old, dried-out popcorn is known for failing to pop. And the physics make sense; its basically the water heats, creates intense pressure inside the pericarp, which then eventually ruptures, yielding a BLEV explosion. So if you have less water inside the pericarp, you'll have less exploding.

So I'd try dehydrating them before roasting. Maybe just leaving them out to air-dry (though that'd probably risk spoilage), or a very low oven. Or a food dehydrator.

Apparently weakening the hull actually improves popcorn yield, at least according to a patent Google turned up. But I'm not sure how you'd strengthen it instead.

I would suggest puncturing or cutting into the kernels, actually.

Popping usually happens when the steam trapped inside expands enough to force its way out of the hull - if the hull itself is punctured, the steam should be able to escape normally or more normally). Especially if this is paired with a lower heat, slow cooking style that will give the moisture enough time to escape whatever puncture you made. Canned hominy is usually pretty soft, you can probably take a skewer and just poke at individual pieces while it's still fresh and soft, or have it on hand to poke with every time you pull the hominy out to stir, and the steam shouldn't build up inside and start popping. The corn may roast sooner (literally, dry out faster since the steam can get out and not build up), but that doesn't have to be a bad thing. Or, depending on the size of pieces you want, you might cut kernels in half. or just smack them with the back of a spoon so they're "cracked", enough so the hull is ruptured. Even if the outer edges dry to form a new crust where you poked at it, enough extra moisture may have gotten out i the meantime to prevent pops or to keep them smaller.

As for covering the recipe, I'd like to say it will be fine. It might take a bit longer to bake, or at least to reach the texture you're looking for, since the moisture will be trapped under the cover for longer. The more loosely covered you can manage, the better the steam can escape. I've done something similar-ish, in a tagine on the stove-top, a little oil and seasoning, and steady heat for an extended period of time - the shape of a tagine traps moisture very well, but it didn't keep the hominy form roasting, so you can cover your hominy, and just keep in mind it will take longer to dry out. I don't think parchment will be a problem, it will let moisture out nicely... foil may need puncturing, though.

I don't think altering the amount of oil will change, or the baking dish (at most, a higher lip might have let some stay in - but popping corn can jump high). The popping is about internal pressure in the hominy and the conversion of water to steam inside a hull, which oil or baking dish don't change. Changing just the temperature will also not necessarily do anything to halt the popping. Lower and slower, like I said, will probably help if there's a way for steam to escape at lower temp. Higher and faster works if you think you can get the hominy cooked before the water boils enough inside to create the pressure to pop - and it sounds like you want the longer cooked texture.

I also don't think dehydrating will work - unless you remove all the water, your corn can still pop (look how dry popping corn actually feels, and it still manages to pop) - and if you remove all of the water, you'll likely end up with something very dry and hard, and not at the texture you want anyway.

10
How can I roast chicken bones (without meat)?
5
How can I stop roast beef drying out?
4
How can I make posole "pop" faster?
6
How to make corn nuts from fresh corn on the cob
2
What other vegetables can I roast with asparagus?
1
How long to roast pistachios
4
How to roast vegetables correctly?
1
How can I relably work out the largest cut size of vegatables X and Y so they roast in the same amount of time?
3
Can I roast poached peanuts?
10
My roasted vegetables turned out soggy, can I roast them again to make them crispy?