I have a question for the seasoned bakers out there. In a nutshell, I'm wondering if there are 'master' recipes for cakes, muffins, etc. Perhaps it's a little bit complicated, but here goes the explanation...

In bread baking, as I understand it, it's all about the hydration when it comes to the actual recipe.

Varying the amount of water in the recipe (along with some other factors, of course--in preparation, for instance) will yield different types of bread. Now, my question really stems from the idea that this 'master' formula for bread has existed for a long, long, time and yet it doesn't really exist for other things. I got to thinking, though, that perhaps there are recipes for cakes and whatnot that are 'master' recipes. Cakes have some general guidelines, for instance.

I'm not talking about necessarily with specific ingredients, because sometimes the bakers prefer shortening, real butter, oil, etc. What I really want to know is if anyone has any ideas about whether or not these recipes really exist.

Sponge cakes and pound cakes do, bread does (sort of), things like carrot cake do.

Does anyone know about anything else?

It sounds like you're essentially looking for Ratio by Michael Ruhlman. It has plenty of what you call master recipes - ratios of ingredients for various recipes. It's not just baked goods - also batters, stocks, meats, sauces, and custards. And it doesn't stop with the ratios; there's a lot of additional discussion of actual recipes to make on top of the plain base, as well as discussion of how varying the ratio will affect the result.

There are of course plenty of reviews on Amazon and elsewhere online, but if you like perspective from members of this site, yossarian also reviewed it in a blog post a while back. I also own it and think it's pretty great.

There's also an app based on the book for Android and iOS (thanks, Stefano). I haven't tried it but it looks like the reviews are mixed to positive - not the shiniest app but it does contain a lot of the basic information.

I wrote some code last year to average out a large number of recipes in the hope of finding something akin to your 'master recipe'. If I collected enough data, I figured I would be able to pin-point ideal recipe ratios with a high level of statistical confidence.

Instead I proved to myself that there is no such thing as an ideal recipe ratio. The reason is that recipe ratios are tightly coupled to a particular context. Among other things I mean context to include cooking technique, cooking equipment, cultural preferences and accompaniments.

Take the bread ratio in your question, for instance. The flour to water ratio there is roughly 5:3 (the same as in the Ruhlman book). In a very simple sense, this ratio is coupled to a particular bread making technique: kneading. I recently discovered, thanks to this question, that when applying a stretch-and-fold technique, I much prefer a ratio of 4:3; a level of hydration that is hardly possible when kneading.

In another question I did some research into the differences between Swedish pancakes (Pannkakor) and Crêpes. I originally imagined that the difference between the ratios was due to cultural preferences. While there may be some truth in that, what I forgot to consider was the different equipment used in making Pannkakor and Crêpes.

Swedish pancakes are made in a cast iron pancake pan. The batter is swirled around to give the pan a thin, even coat and so a relatively thin mixture is needed.

Crêpes are made using a Crêpe maker and a batter spreader so a relatively thick batter can be used, unlike the Swedish pancakes that rely on gravity to spread out the batter. 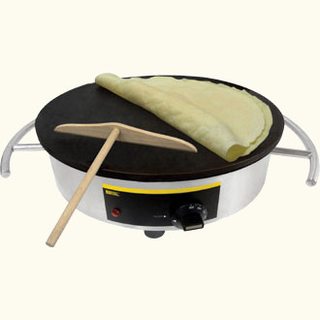 Once again, each ratio is only ideal in its correct context.

When I researched the Pancake question, it turned out that, not only were the average ratios for Pannkakor and Crêpes different, but also the recipes written in English were different to those written in French or Swedish. In both cases the recipes in English asked for more egg and butter.

Although it is only possible to speculate about the reason for the ratio differences, it is not unreasonable to believe that they are due to cultural preferences or traditional expectations. The ideal recipe changes with the setting.

The very first time I attempted to find an ideal recipe ratio was in search of the perfect crumble ratio. I posted the question on this site setting myself up to write an answer that I had already calculated from 116 individual recipes. There turned out to be a better answer. Here's what Kate Gregory had to say,

There is no single ideal. More sugar and butter will mean a more crunchy crumble top [...], more flour will make it more sandy - they each have their place. [...] The longer the fruit needs to cook, the more resilient to cooking the topping needs to be. And of course for a tart fruit like rhubarb, you might like more sugar in the topping to balance it

And this ratio for plain muffins.

Blueberry muffin batter needs less liquid due to the water content of the Blueberries. Twice as much sugar is used in the Blueberry ratio to balance the sourness of the fruit.

So the ideal ratio changes according to what else you put in, or eat with the recipe you are making.

What to do when there is no Master recipe

If all you need is a starting point, then pretty much any recipe from a dependable source will do. The Ratio book recommended in another answer is fine in this regard although Ruhlman doesn't make it clear how he finds his ratios. I assume he used a mixture of experience and experiment, but we don't get to read about that. A much better book in this respect is The New Best Recipe. Here you get recipes together with a description of experiments and adjustments attempted in order to perfect them.

In answer to @Jefromi's comment, I agree that there is some utility in comparing recipe adjustments to a baseline. If someone were to take Michael Ruhlman's Ratio and make a study of the effects of altering the amounts of individual ingredients, that would be a book worth reading.

What I object to is selecting a baseline and then calling it a master recipe. I see problems with this however a baseline is selected. If I were to find a central tendency for Bread ratios (irrespective of context), I don't see why that would result in an ideal ratio. It may give me something mediocre, or unworkable.

You could select in favour of simplicity, choosing, for example, plain sponge cake as a baseline for all other variations. User @Athanasius' Amazon review of Ratio (which has shaped my opinions here) suggests some problems with this,

[...] take Ruhlman's sponge cake formula of 1:1:1:1 for eggs, flour, fat, and sugar. [...] Compare Ruhlman's ratio to a chart of ratios for sponge cake alone in Bo Friberg's "Professional Pastry Chef." Friberg gives ratios for eight different types of sponge cakes, all with different ingredients and vastly different techniques. For the weight equivalent of 12 eggs, flour varies from 5 to 21 oz. [...], fat 0-12 oz., and sugar 6-24 oz. [...] Lest you think that Friberg's table is only for professionals, I need to point out that over half of these sponge cake types are found in standard home cookbooks, and only two are rather advanced types generally only used by pastry chefs.

Once again, this points to how recipe ratios are tied to a context, and while it is certainly possible to choose a particular technique/ratio combination as a baseline, I don't see how it can be done objectively.

Yet another option is to embrace the fact that ratios are contextual and accept that a 'master recipe' can only be considered such in a very narrow sense.

Another way of comparing recipes as plotted datapoints is attempted in this github repository. 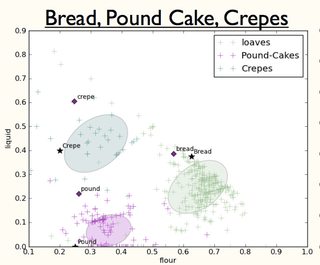 While this bypasses the idea of a master recipe, I'm not sure of its utility.

My conclusion? With regards to recipe comparison, you can establish a baseline, but there is no reason to consider that baseline a master recipe.

Not the answer you're looking for? Browse other questions tagged baking baker-percentage or ask your own question.

31
Why stretch and fold vs traditional kneading of bread dough?
12
What is the difference between crepes and Swedish pancakes?
9
What is the correct flour, sugar, butter ratio for crumble?
8
Bakers percentage for cookies
2
How to Convert Blueberry Muffin Recipe to Vanilla Muffin Recipe

16
Why does my bread collapse in my bread machine?
13
Create my own high-gluten flour by mixing vital wheat gluten and bread/AP flour?
5
Peanut Butter substitute in baking
1
Would baking chocolate with baileys/kalhua cook out the alcohol?
3
Is there a bread you can mix in the evening, leave overnight, and bake in morning?
5
Is it possible to bake bread or the like using a stovetop tagine?
6
Protein networks in vegan cakes
2
How could I split the proving and baking of bread over 8 hours plus?
1
Questions about the how and when of baking homemade sourdough bread
2
Why do baking recipes often tell you to “make a well” in flour before adding wet ingredients?