I've got a recipe that calls for some buttermilk, but none on-hand. Is there some way I could use some common ingredient(s) as a substitute?

There are a few possibilities:

I have used the first two with success.

You can use the aforementioned substitutions for buttermilk but keep in mind that they will produce a slightly different flavor due to the types of acids and their flavor profiles:

Chemically they will work the same however.

Sour cream or yogurt thinned with milk to the consistency of buttermilk will probably give you the closest substitution in flavor.

I've seen both milk + white vinegar or milk + lemon juice mentioned as substitutes. I've only tried the former, and that worked great. I've used a ratio of 1 cup milk to 1 tablespoon of vinegar.

I'll attempt to clarify a few issues that have come up in previous answers and comments:

I can think of three primary functions for buttermilk in most recipes:

The best substitute will depend on which of these factors is/are necessary or primary in a particular recipe. I'll consider each below. However, I will first note that the substitutions that balance all three the best for most recipes are probably kefir or acidified milk (curdled with lemon, vinegar, or some other acid).

(1) Flavor: As pointed out in Darin Sehnert's answer, the particular type of acid will impact the flavor. Buttermilk and other fermented dairy products (kefir, yogurt, sour cream, crème fraîche, etc.) will all have lactic acid as a primary flavor. Different fermented dairy products also use various blends of bacteria and ferment at different temperatures, which will create subtle differences in taste as well. Buttermilk is fermented at room temperature or slightly warmer, as is kefir, while yogurt is also fermented from regular milk but at higher temperatures (with different bacteria).

If the main flavor components are "dairy" and "fermented dairy," then obviously a naturally fermented dairy product would likely be the best substitute, even if the thickness or acidity isn't quite right. (This would generally be true of uncooked recipes containing a lot of buttermilk, like salad dressings or smoothies.)

If a "dairy" flavor and "sour" flavor are desired, but the specific buttermilk flavor is subtle or would be drowned out by other prominent flavors, then simply acidifying the milk using vinegar or lemon juice would be a reasonable option.

A final concern about flavor is whether the substitute actually resembles buttermilk in terms of other chemical components. Buttermilk, yogurt, kefir, and milk acidified by lemon or vinegar will all have very roughly the same fat content and sugar content, as well as acidity. Things like sour cream/crème fraîche or molasses may be able to substitute for other characteristics below, but they will introduce significant differences in flavor (much more fat or sugar, respectively), which could require modification to other ingredients in a recipe.

(2) Texture/thickness: Buttermilk is more viscous (thicker) than milk, but not significantly so. Acidified milk (with lemon or vinegar) should have a roughly similar texture.

Other fermented milk products may vary: yogurt or sour cream will likely be thicker and may require dilution with milk, water, or more liquid in the recipe in general. This will be particularly important when the substitute is to be mixed into a fluid or semi-solid mixture, such as pancake batter or cake batter. Batters that are too thick or too thin may not cook evenly or may influence the rising characteristics. Kefir often has a similar viscosity to buttermilk, and store-bought kefir is often an ideal replacement for buttermilk if on-hand. But homemade kefir will often have significant amounts of kefiran, which tends to make it more "sticky" and could be a problem when combined with wet or sticky doughs.

(3) Leavening: When combined with baking soda and/or baking powder, buttermilk is often used to leaven baked goods. Thinning out yogurt or sour cream to achieve an appropriate texture may be reasonable for uncooked products, and it may be necessary to achieve the correct batter consistency. But this type of substitution can have an impact on leavening.

Most of the fermented dairy products have pH values of around 4.5, whether cultured buttermilk or yogurt or kefir or sour cream. Thus, when undiluted, they will react with the same amount of baking soda/powder in similar ways. When highly diluted (say, a tablespoon or two of thick yogurt or sour cream per cup of milk), the resulting thickness may be like buttermilk, but the acidity will be lessened enough that there may not be enough acid to react with all of the baking soda/powder. (This may be exacerbated further with sour cream or crème fraîche, which may have similar pH but less water content because of the fat concentration, which means less overall acid to react.) The result may be insufficient rising of the batter/dough, or a "chemical" aftertaste from leftover baking soda that didn't react, or both.

That said, most recipes tend to allow for the fact that fermented dairy products vary somewhat in their acidity, and a little leftover acidity is often a good flavor note, while leftover baking soda/powder generally tastes terrible. So most recipes err on the side of a smaller amount of leavening. (Also, too much leavening can often introduce large bubbles which may simply bubble out of the top of the batter, rather than remaining inside and creating a lighter texture.) Moreover, it should be noted that pH is logarithmic, so if you combine a fermented dairy product that has pH of 4.0-4.5 with some milk or water with a pH around 7, the resulting mixture will still be much closer to the original 4.5 pH range than to the neutral 7 pH.

Bottom line is that a mixture of 1/2 yogurt and 1/2 milk or 2:1 or 3:2 or whatever will likely still have enough acidity to leaven most recipes. But I've seen other online resources which recommend a much greater dilution of yogurt or sour cream (like 1:8 or even 1:16), which could potentially interfere with leavening and/or leave a "chemical" aftertaste in some recipes.

Unless you want to spend a lot of time doing chemical calculations to determine the necessary amount of acidity, I might suggest combining approaches to balance flavor and leavening needs in baked goods. For example, using some yogurt/sour cream mixed with some acidified milk (with lemon or vinegar) to reduce thickness could give some of the fermented milk flavor and definitely maintain adequate acidity. The other possibility if you are into experimentation is to try mixing a small amount of the batter and taste the result: if you taste baking soda, you know you can fix the next batch by including a little lemon juice or vinegar. (You might be able to fix the flavor of the current batch by adding some, but the additional mixing will likely negatively affect the leavening in some recipes.)

As a final point, I would note the listing of molasses as a potential substitute in some sources. To me, this seems rather bizarre, given the vastly different flavor notes and significant amount of sugar that molasses would add. (Also, it's not as acidic as fermented dairy, often having a pH above 5.) If you're willing to change flavors radically and introduce huge amounts of sugar, you might also seriously consider everything acidic from fruit juice to Coca-Cola. (I'm not really serious about the latter, but it would leaven your batter and some people might like it.) This list, for example, has the pH ranges of many common foods. I like the taste of molasses, but before I personally would use it as a substitute for buttermilk leavening, I'd consider some other options like fruit juices or purees, or something else whose flavor might blend well with the baked goods. Molasses will also generally have a significantly lower water content than the other proposed substitutes, which could alter the viscosity of the batter -- some other substitutes with sufficient acidity could contain enough water to balance both texture and leavening while adding a complementary flavor.

A vegan alternative that can work for some recipes is to add lemon juice to almond milk.

This worked very good for me to make soda bread, in which the acidic quality of buttermilk reacts with baking soda, making the bread rise. The acidity of lemon juice can achieve the same thing.

I imagine you could use soy or other non-dairy milk instead of almond milk, though I can't say whether it would taste as good. This was a very simple recipe with just flour, baking soda, salt, and "buttermilk". Substituting almond milk plus lemon juice made a very tasty bread, with no odd overtones or aftertastes. 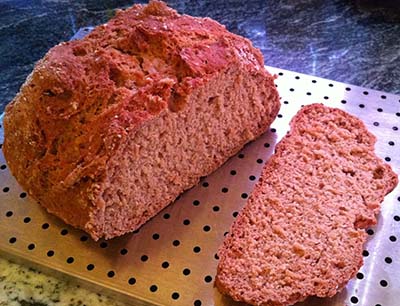 Firstly, true buttermilk would have been the waste product from making butter. Depending on the place it was made, the cream would in many cases have been fermented using lactic acid bacteria.

An important (and obvious) consideration there is that buttermilk resembles skimmed milk, being just 0.5% fat.

Commercial buttermilks today such as this one are made from skimmed milk powder https://www.sainsburys.co.uk/gol-ui/product/cream-custard/sainsburys-buttermilk-300ml

The specific buttermilk flavour is achieved from diacetyl 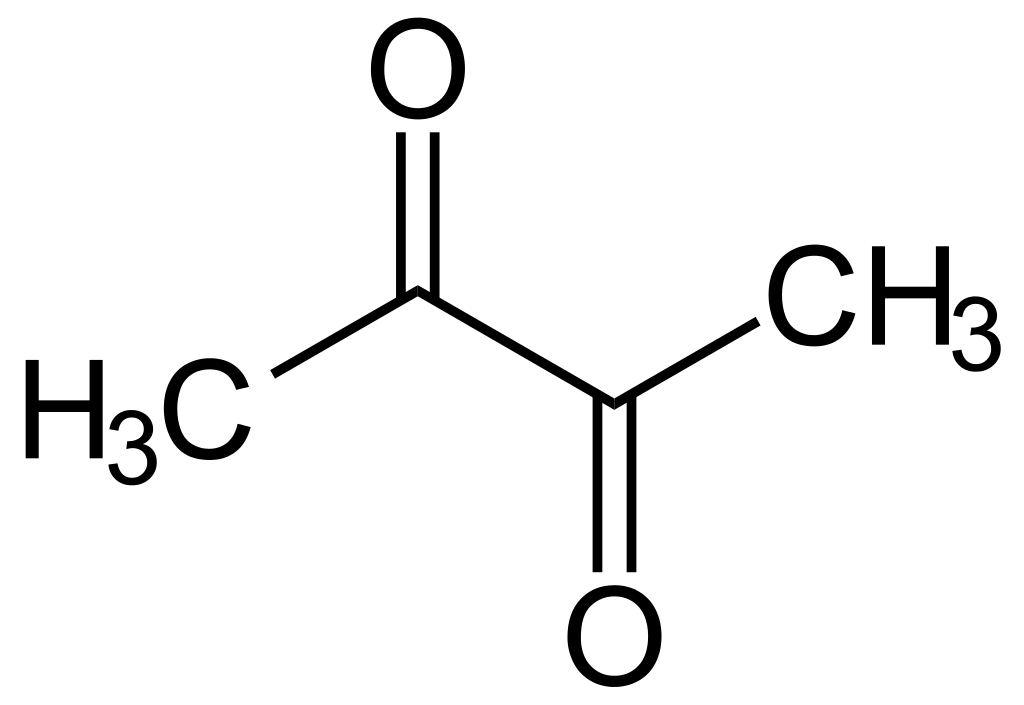 which is a 'buttery' flavour. Artificial butter flavouring would use diacetyl as a compound.

The exact flavour of commercial buttermilk depends on temperature and starter culture, and can vary. It is not the same as yogurt because buttermilk uses different LAB, which may be selected for their diacetyl production.

In terms of pH, buttermilk, yogurt, and milk + acid can all be the same, but the flavour of each will differ. In addition, while acid will curdle the caseins in milk, curdled milk is not the same as yogurt or buttermilk in texture.

Low-fat yogurt seems like it would be the closest. Normal yogurt would work fine in many cases. If you are already using butter, then you will have all the butter flavour you need, but in some cases it might be that substituting some of the oil in a recipe for butter and then using low-fat yogurt would come very close.

Ultimately nothing is the same, in that if milk with lemon juice is not the same taste as yogurt, it's rather foolish to imagine that you could get the same flavour from that as compared to buttermilk, which is fermented skimmed milk.

Not the answer you're looking for? Browse other questions tagged substitutions dairy buttermilk or ask your own question.