I would like to buy strawberry ice-cream for my friend, and most of the strawberry-flavored ice-cream is pink in color. However, I am thinking of serving the ice-cream green color instead. Is there any way to color the ice-cream as such? Thank you.

If you make homemade strawberry ice cream, the color is likely to be very, very pale, approaching white. Green food coloring in your mix should do the trick.

It would be very difficult to retroactively turn commercial ice cream a different color. The pink is almost certainly from food coloring, and mixing in another coloring would be very difficult without adversely affecting the texture of the ice cream--essentially you would end up having to melt and rechurn, to get any kind of decent result, in which case you might as well simply make homemade ice cream.

You can get recipes very easily by googling. You will, of course, need an ice cream maker. The frozeen barrel kind can be had readily and for a reasonable price.

However, if you're willing to be a little adventurous, then you can do this! and without an ice cream machine. And it'll be a fun party trick, to boot. 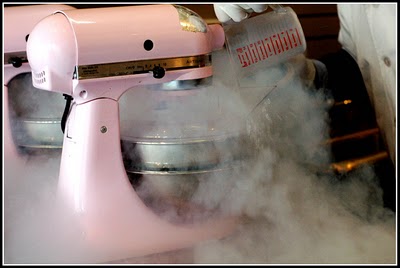 It's best served right away, but you can keep it in the freezer for short time. Otherwise it'll lose some of its precious texture.

Here is how light-pink and hot-green will blend. From Color Blender The top and bottom colors mix to give the middle one which is green enough. I think Color Blender uses additive color process, but either way, the Haagen Dazs is light enough in colour to work.

Can I make this awesome ice cream without a Stand Mixer? Yes. Have a look at this Vivian Macaron entry. Or just google "liquid nitrogen ice cream".

No, this is not possible for several reasons.

First, you cannot color already-made ice-cream. It is made from frozen crystals of cream, and it is too hard frozen to be mixed with stuff. If you were to drizzle food coloring on it, you'd only get a few dots, but they will not spread through the whole thing. Colored ice cream is made by dissolving food coloring in the liquid cream, then churning it with an ice cream machine into its usual state. The only way for you to add color would be to melt the ice cream first, add the coloring, then freeze it again with a machine. Downsides: you need the machine, else if you just put cream into the freezer, you'd end up with a hard block of milky ice. Also, you would have to start from proper, cream-based ice cream. You can get such in the gelateria. If you just buy a tub of ice cream from the supermarket, it won't work, because it is not made out of milk but from an emulsion which separates into unappetizing phases after melting.

Second, if you want green, starting out with a pink ice cream is a bad idea. You probably had some color theory in school. Pink is made from a small amount of red dye in white ice cream. If you add green dye to the red one, you get brown. You'd have to add very large amounts of green dye before the red hue is lost in the green, and even then, the color won't be too appetizing, it would have a slightly dirty tinge. Also, adding such amounts of food dye to ice cream is not a good idea. First, it can change the taste noticeably. Second, the solvents in the dye can be enough to keep the ice cream for freezing.

Your best option would be to forget the existing pink ice cream, and make your own, adding green dye from the start. For this, you need an ice cream machine (there are inexpensive ones for home use). Then, you have the problem of getting strawberry taste without getting it pink. Homemade ice cream uses real strawberries, and when they are ripe enough to give you a nice flavor, they also color the ice cream. You could try getting synthetic strawberry aroma, but I don't know where you can get a source for it. Alternatively, you could try making low-fat ice cream, starting with a commercially available strawberry-tasting milk drink and mixing it with cream, but again, it will be slightly pink.

If you have an ice cream machine, you can try the homemade route. But it would be much easier if you can go for a different type of unexpected taste/color combination. For example, homemade pineapple ice cream is very pale, almost white. If you color it, say, red, nobody will expect pineapple taste in it. You can go even further and make a very unusual ice cream by infusing the cream with a herb (e.g. rosemary or lemon balm), then color it a hue nobody associates with the taste of herbs.

If you don't have a machine, you could try making something which is not ice cream. For example, you could color a milkshake made using commercial ice cream. You will have no trouble getting the food coloring into the milk. The same problems with mixing colors apply as above - you could make a blue-violet or orange milkshake from a pink ice cream, but a green one would be hard to achieve.

If you want to start with bought ice cream there isn't really a way to re-color it, but you could coat it in some thing else.

One idea might be dyed white chocolate (just melted and with a small mount of food coloring added). Maybe create small balls of strawberry ice-cream with a watermelon scoop, put on a stick or a tooth pick and dip in the green melted chocolate and put the balls back in the freezer until serving.

I'm going to go ahead and contradict all the existing answers: yes, you can do this. It'd be a lot easier (and better) if you made the ice cream in the first place, but you don't have to.

As others have said, start with as white as possible a strawberry ice cream, so that your green food coloring doesn't have much to cover up.

Dump the whole thing in a stand mixer, and use the paddle attachment to stir it until it softens up enough to add in some food coloring and get it mixed in. The coloring may not be completely smooth, but it should mix in well - this method also works for mixing in liquid flavorings (like liqueurs) and solid mix-ins (cookie bits, nuts, and so on). It will hurt the texture a bit, but as long as you don't let it soften too much, it'll be fine.

If you don't have a stand mixer, you can do the same thing by hand, but it'll be tougher - either you'll have to work really hard to do what the stand mixer would, or you'll let it get softer in order to mix it, and end up compromising the texture more.

And lest people say this won't work: even David Lebovitz suggests it, in the mix-ins section of The Perfect Scoop. Sure, food coloring may end up a bit swirly, but it's better than nothing! It works because storebought ice cream is made to be really soft before it melts (easier to scoop and more fun to eat) so bringing it to where it's just soft enough to mix doesn't damage the structure as much as it would with homemade ice cream.

Why not just buy Pistachio ice cream and add your own strawberries? You can slice & dice them and let the IC soften ever so little and mix them in and refreeze. However you always run the risk of getting the icky crystals that can form on refrozen ice cream. Better yet add the strawberries when you are serving it.

BTW, there is an ice cream maker attachment for the kitchen aid mixer. :)

Not the answer you're looking for? Browse other questions tagged ice-cream coloring or ask your own question.