Why does broccoli turn brown when steaming?

I steam my broccoli until it's 'al dente' and some buds turn brown. I've done a small search, but haven't found anything. 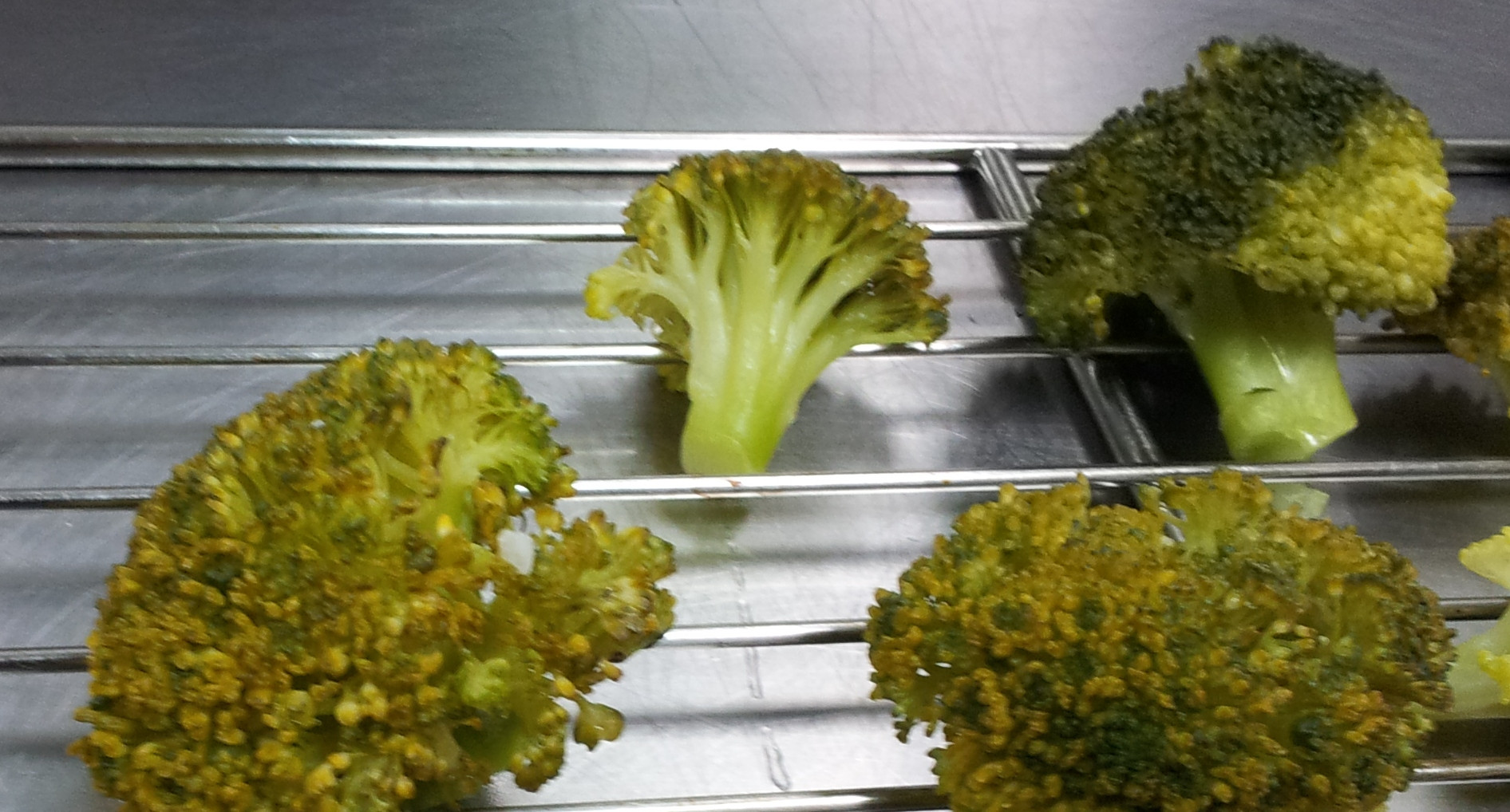 I'm thinking maybe the steam is too hot or I'm steaming too long. What do you think?

further to SAJ14SAJ's answer, what happens is the Magnesium atom in the bright green Chlorophyll is lost in acidic conditions and you end up with Pheophytin which is Olive Green.

There are other reactions at play mediated by the enzyme Chlorophyllase which can be active even in frozen storage.

The main reason for blanching (hot water part) is to stop this enzyme's activity. The ice bath is to stop the cooking process and the magnesium loss.

This short presentation from Purdue University explains this along with the molecular structure if you're interested.

The presentation states that green vegetables are blanched to end enzyme activity, to preserve the natural green colour.

Per the transcript of Alton Brown's Good Eat's episode If It Ain't Broccoli, Don't Fix It:

This would let other pigments reveal themselves, turning making the appearance of your broccoli yellowish or brownish. Your picture shows that the individual florets seem to be most effected, which are the smallest and easiest parts to cook on the broccoli.

So it may simply be an issue of overcooking the little florets.

Later in the transcript, Brown recommends a hybrid method of cooking, giving different treatment to the stalks and florets to minimize this effect.

According to The Happy Scientist, raising the pH with baking soda will prevent the enzymes from effecting the chlorophyll, but this would be difficult to apply when steaming, and of course it also would have the unfortunate side effect of turning the broccoli mushy.

Personally, I prefer to roast broccoli rather than steam it. It is a little slower, but can be very effective, and of course, a different type of browning is somewhat expected :-)

well the brown is from oxidation(just about anything can be oxidized) by the exposure to water.

Yellow on the other hand is most likely from the broccoli starting to have blossoms in the florets that eventually produce seeds.

Not the answer you're looking for? Browse other questions tagged food-science steaming broccoli or ask your own question.

15
Tricks to ensure Mailliard/Browning reaction?
2
Is it okay to bake caramel pudding rather than steaming it?
9
Why boil rice first when steaming rice?
8
How long to steam eggs for? (Instead of hard boiling)
2
Does Freezing Broccoli Dry it Out?
6
Why are my Baozi shrinking?
8
Why does microwave popcorn burn?
1
Optimal cooking tool for long-duration steaming
6
Why does the Instant Pot use pressure while steaming?
6
Why does water always boil over when steaming shrimp?