What is this sandwich-salad dish?

I found this open-faced sandwich-like creation in several French-style bakeries in East Asia. 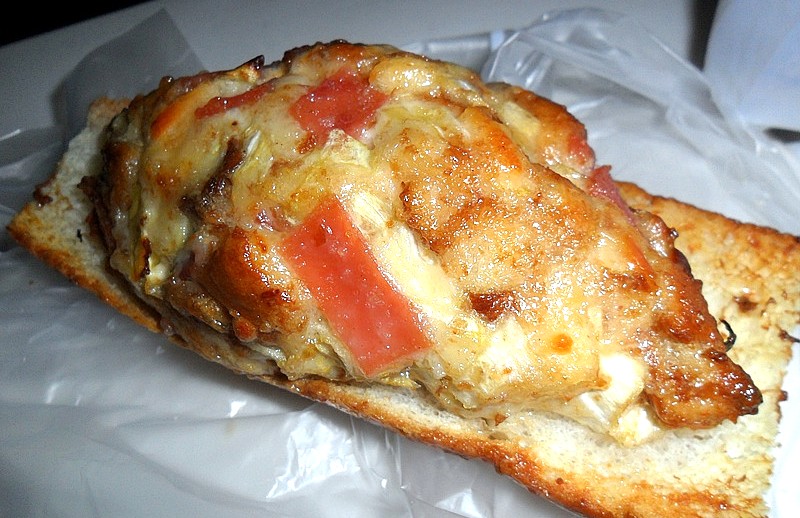 Several stores are calling it "凯撒", which means "Caesar, but I could find nothing about this dish anywhere on-line.Is this dish common in European bakeries? What is it called?

I'm not sure if there's a specific name for this particular combination, but as you mention it's specifically from a French restaurant, I'd call it a tartine, which is can refer to most anything served on a piece of bread or toast, cold or hot. If it were small enough to eaten in one bite, it'd be a canapé.

Growing up, we'd call a similar dish made with tuna salad (a mix of cooked tuna, mayo, onions, pickles) on bread and broiled 'til it developed a similar crust as a 'tuna boat' (to differentiate between a 'tuna melt' which had cheese on top), but I don't know that 'boat' in this context is generic enough to really convey any meaning to the typical person.

Because you mention cabbage, the topping in its uncooked form might be considered to be a cole slaw, which translates to cold salad but in the US generally means a cabbage salad dressed with vinaigrette or mayonnaise. Because of the ham and mayo, you might also call it a ham salad.

I'm not familiar with mayo-based cold salad recipes that use bread in them, but it's frequently used as a binder in crab cakes, which has some similarities as it's mayo-based and then broiled.

Not the answer you're looking for? Browse other questions tagged salad food-identification sandwich or ask your own question.

8
What are the pros/cons of serving the salad dish before/after the main dish?
5
What are the transparent strands in this salad?
2
What is this Austrian pork dish called?
1
Wendy's Spicy Chicken Sandwich
2
What is this Austrian dish? It resembles potato croquettes?
1
Bitter tasting salad
0
What's this salad of gray lumps in white dressing?
16
What can I call this Swiss Chard side dish exactly in a menu?