I have noticed that tomato sauce (having started with deep red tomatoes) can turn orange.

The colour change isn't from mixing in an ingredient of different colour such as cream. It seems to occur in these observed circumstances:

The sauce stays nice and red if taken off the heat quickly and not blended.

Some of the ideas are:

This question also seems to have been asked on the serious eats forum without a substantive answer.

It's been a few years but there now is a definite answer to this question.

@PegDat is correct. The Tomatoes Oxidize when they are exposed to air and turn orange. 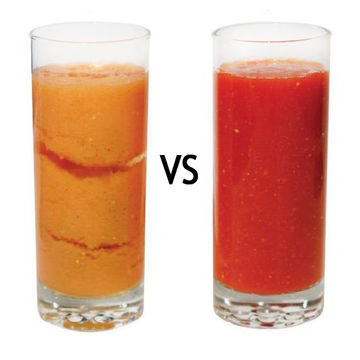 This was proved using an experiment with vacuum blender 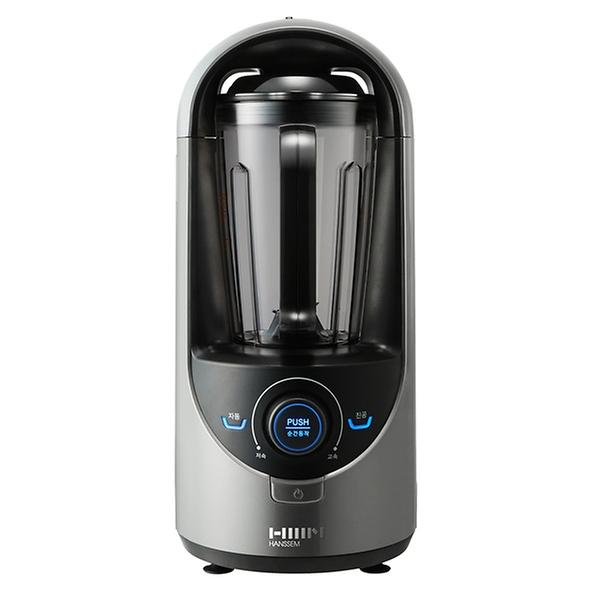 blending tomatoes with air and with most of the air pumped out.

When you reduce the air in the blender chamber, the tomatoes remain bright red.

I learned that using an electric blender adds oxygen to the sauce and changes the red to orange (like beating egg yolks lightens them from orange to a pale yellow). If you use a food mill, you don't beat in oxygen, and the tomato sauce stays red.

This often happens when the tomatoes used are not fully mature. Although apparently are completely red, the parties less red lighten the sauce.

Alternatively, depends on the quality of tomatoes. The Native Americans tomatoes were yellow (hence the Italian name "golden apple" = "pomo d'oro" = "pomodoro"). Through the selections have become red. But remaining mixed colors, which are "not red" but "reddish". Or yellow - orange.

In the United States, the orange tomatoes are sold seasonally in the markets of agricultural producers: it is "heirloom tomatoes" or "tomatoes tradition" (heirloom tomatoes), ie those that were cultivated before 1800 and which for centuries delighted the palates of our ancestors.

The difference is due to the chemical form of lycopene in red tomatoes that occurs in the trans form while in the orange tomatoes in tetra-cis form. Research conducted in California and in Ohio (USA) have shown that the form of the tetra-cis lycopene is more efficiently absorbed by the body compared to the trans form.

The research group has also assessed the oxidative damage: lycopene and other antioxidant molecules, in fact, may protect both the cells and the essential fatty acids from oxidation. Using a procedure known as "TBARS assay" the researchers noted that oxidative damage is decreased by consuming tomato sauce and tomato sauce red orange, but the damage reduction was greater in the diet that included the consumption of orange tomatoes. (*)

Personally I can say that in the diets of very young children less red tomatoes (fresh, peeled and seeded) are preferred, because they are more digestible and light.

PS A very prolonged cooking of the sauce, on the contrary, gives a very dark and indigestible sauce (tomato paste) which is used more as a seasoning for cooking of regional recipes. Is never used on pasta, as the taste is altered and too strong.

Yes it happens very often, and we all start with deep red tomatoes, san marzano and so on. But often the salsa comes oranges. Someone says in this forum that it comes from blending tomatoes after mixing with oil. But I never put so much oil to think that it could depend by oil. And it happens to me too. And the other persons disagree too.

Everyone does buy san marzano tomatoes (or similar), very mature and red. But when you cut them, inside they can be hard and a bit pale, not really red. And flavonoid and lycopene are into any tomato, just in different or more or less visible quantity. (flavonoyd becomes from latin: flavus = yellow or blond / leukos is from greek = white).

To me, since the original DNA is yellow, it could be that some genetic trait has remained, not limited to only one quality but in general the whole botanical species, and sometimes emerges.

The major dietary source of lycopene is represented by the tomato (Solanum lycopersicum) from which it takes its name, and its derivatives, in which represents 60% of the total content in carotenoids. The lycopene content is influenced by the level of maturation of the tomato, has been calculated that in fact red and ripe tomatoes are present 50 mg / kg of lycopene.

But of course, i can wrong.

"The date of his arrival in Europe in 1540 when the Spaniard Hernán Cortés returned to his homeland and brought the specimens, but its cultivation and propagation waited until the second half of the seventeenth century. Arrives in Italy in 1596 but only later, finding favorable climatic conditions in the south of the country, you have the color change of its color from the original and distinctive gold color, which gave its name to the plant, the current red, thanks to selections and subsequent grafts."

Yes, I agree. What you say agrees with my experience. I must say that it is false that "many often" happens, it just happens sometimes. Normally remain red.

But I never use electrical equipment, only hand devices, like these: 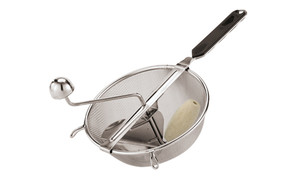 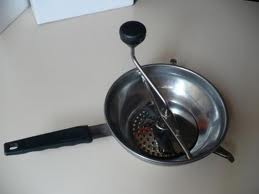 The first is precisely for the tomato sauce. The second pass any cooked vegetables.

But if you want, you can tray the ancient recipe, that I use only when I have guests and I want to offer some pasta with a fresh made sauce.

You must blanch the tomatoes in boiling water until the skin breaks down (usually 20-30 seconds). Then remove the tomatoes from the water and peel them right away, still intact and hot. This is the method used by our grandmothers who were canned. After removing the skin, you can put the whole tomatoes into the jars and sterilize them. Or you can make a sauce with olive oil, salt and herbs (as I do) or with other ingredients such as carrots, celery or whatever.

I do not think that modern industries for storage of tomato sauce still use this method. But our grandmothers and women in the south had for days hotted hands, to catch tons of hot tomatoes from boiling water.

In any case, more I reflect about it, and more I am convinced that the selection process, during lasted centuries, to obtain the current red color, is perhaps lately put aside for other selective criteria, such as the shape and the small amount of seeds contained, that maybe are privileged because more attractive to customers.

Perhaps we have forgotten the original yellow color (except a few cultured people), which today tends to reappear.

I think it is mixing the basil with the other ingredients. My sauce stays red, half my family like it chunky, the other half prefer blended. The blended changes to orange color.

We don't use a blender. But what we do is cook the sauce all day with pork neck bones. Always thought this was the reason, but maybe I'm wrong.

Not the answer you're looking for? Browse other questions tagged food-science tomatoes italian-cuisine chemistry or ask your own question.

3
Why does my cookbook want me to drain my tomatoes for a pasta sauce?
1
Why is my tomato sauce getting pink?

6
Spaghetti sauce consistency / coating noodles
13
What is the difference between tomato puree, paste and sauce?
22
Why does tomato sauce spatter more than other sauces?
1
Turn Passata Into Tomato Paste?
0
Bottled tomato sauce separated
2
What kind of cream is used to make tomato sauce into an orange colour i.e. creamy tomato sauce?