To put it simply: if you increase the amount of capsaicin per bite of food, you'll make it hotter.

So if we're talking about just a sauce that's basically pure peppers, then yes, the mixture of a very hot pepper and a more mild pepper will be somewhere in between the two, and the addition of the mild pepper dilutes the sauce - a spoonful of it will not contain as much capsaicin.

But if we're talking about a dish that's mostly other things, with ghost pepper for heat in the sauce, and on top of that you add another pepper to the sauce, then yes, the other pepper will add heat - there'll be more capsaicin in each bite. Will it be noticeable? If it's a banana pepper, no - it's orders of magnitude milder, so you'll never notice. If it's a habanero, probably - it's not that much more mild than the ghost pepper.

Other peppers may well add great flavor, though. There's quite a variety among all the chilis, and it's perfectly reasonable to use half a dozen different ones in a single dish just to get the nice full flavor you want. This is still true if you're making a really hot dish. That said, if you're talking about "the hottest foods" and ghost peppers, it sounds like your goal is really just to make something really hot, not something you can actually taste - you can definitely get plenty of heat from other peppers. If you're using the hottest possible peppers, it's probably either a gimmick, or the whole point is to burn your tongue off so you can't taste anything else anyway.

This is of course all assuming you're actually using the whole pepper, in order to get all the heat from it. If you're not, then... why are you bothering with ghost peppers? See Cos Callis' answer for more explanation.

I had a similar question sometime ago. You should think of the pepper in three parts: 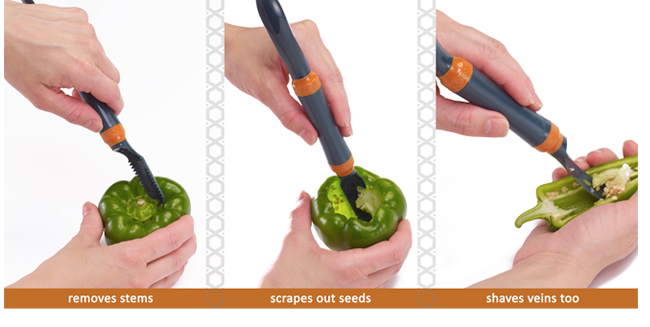 While each breed of pepper has its own unique flavor. If during the preparation the veins and seeds are removed, regardless of the type of pepper, the heat is removed with them. The variety of peppers in any given recipe will contribute flavors to the dish, but -per the answer to the previous question (from @Jefromi) - capsaicin is capsaicin and the overall 'heat' of the dish reflects how thoroughly the veins and seeds have been removed or not removed.

In short, more types of peppers does not necessarily add more heat, but more capsaicin does.

The picture included was chosen because it illustrates the structure of the pepper, it is not an endorsement of the tool being demonstrated.

Jefromi has it right in that you sum up capsaicin of different peppers for spiciness and vary flavor by using different ones. What you can do to increase perceived spiciness considerably without adding more of capsaicin carriers though, is using foods/spices that are hot through different means.

8
Does the choice of peppers affect the 'flavor of the heat'?

5
Should chili peppers be seared?
5
Do chile peppers heat vary depending on the season?
8
Does the choice of peppers affect the 'flavor of the heat'?
1
Can dried peppers get hotter with aging?
2
How long will my pepper relish last, and how can I stretch it out?
6
preserving hot peppers without damaging heat
3
Hot peppers in soup don't stay spicy
4
How should I substitute jalapeño peppers for fresh green cayenne peppers?
2
What type of chili in Olive Garden ‘Calabrian Chicken’
2
Can I prevent hot pepper sauce losing heat?