Is there anything special about "homogenized" shortening?

I'm interested in trying to make this "water whip" pie crust. Unlike a typical pie crust where lard/butter/shortening is cut into the flour, the shortening is apparently melted and whipped before the flour is added. I'm curious to try it. But the method will only work with a particular brand of shortening (allegedly):

It's Spry's easy "Water-Whip" Method.... This time-saving method is possible only because Spry is homogenized -- pre-creamed to mix directly with liquids.

The recipe is from ~1950 and Spry shortening isn't around anymore. I am wondering whether another shortening (Crisco, etc.) would work in its place, or perhaps even another fat (butter, lard) -- is there really something special about Spry, or was that just a marketing claim?

substitutions pie shortening
Share
Improve this question
asked May 15 '13 at 22:24

There is no way to know what they meant when they said "homogenized" - this really sounds like marketing-speak.

But if you are trying to whip shortening with water, you will need emulsifiers. I could imagine that the Spry already had them in. The "With cake improver" sentence in the can also points in this direction, as cake improver often contains lecithine.

You can try normal vegetable shortening. If it does not whip but stays separated from the water (it will probably break up into tiny droplets swimming on the surface under the mixer, but if you let it sit around for a few minutes, they will start coalescing into larger droplets, with the tendency to join into a single oily layer on top of the water), then throw it out and make a second batch, but add an emulsifier to the water first. Lecithine, xanthan, or guar will all work. Then you will get a really whipped shortening, something of a poor man's hollandaise. Work this with your flour.

You must be aware that while the crust made this way will be tender, it won't be flaky. A flaky crust is flaky because it is made from two different textures, the flour-fat mixture and the flour-water mixture, and they separate each other in sheets after kneading. If you mix the water and fat into a whip first, you will not get any flakes. You will get a shortbread crust, which is fine - it tends to be the standard pie crust in continental Europe. But if your goal is flaky, then you should follow the traditional cutting method, Kenji's easy flaky method, or the traditional boiling method.

The blogger at The Simple Front Porch recommends the recipe, using Crisco in lieu of the Spry's. 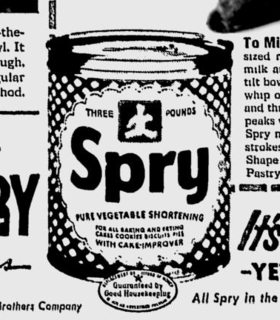 It was obviously simply a competitor in the market now dominated by Crisco (at least in the US).

Spring came out 30 years before Crisco. Crisco is the new comer on the block. Spry in the 20's. Crisco in the 50's. Spry is still made and distributed in England, but not in the US anymore.

In the 50's, when Crisco came out, many women tried it just to see. They ALL went back to their Spry. Spry was the superior product.

Cold water will give you a flakier crust, but that is a train load of more information. The hot water method was preferred because it was less tricky. It gave more consistent results. My grandmother never attempted cold water until I managed to do it in the 60's, and subsequently showed her. I was not the better cook, I got lucky.

Not the answer you're looking for? Browse other questions tagged substitutions pie shortening or ask your own question.