(Inspired by, but broadening, Can you parfry hash browns in advance? )

In American diners, when you order home fries or hash browns, they are cooked to order, but are brought to the table in much less time than it would take me to fully cook them at home.

How can I prepare potatoes, then pause cooking, so that they can be finished off quickly to a high standard of crispy home fries / hash browns? Is there a technique whereby I can freeze the part-made dish?

This answer is for sliced or diced home fries, such as this type: 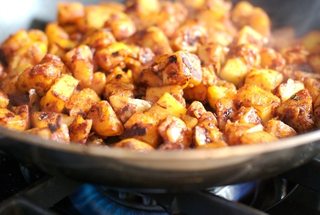 Shredded style hash browns are much more difficult to pre-cook at home, since the shreds are fragile and go from under cooked to over cooked quickly.

Note that restaurants tend to simply have home fries on the griddle, in a warm section, essentially fully cooked. This is why they tend to be more cooked at the end of breakfast service than the beginning in many restaurants.

For home service, there are several effective techniques for making home fries cook more rapidly, or at least more conveniently.

The easiest for pre-preparation is simply to par-cook the potatoes. In either case, the potatoes should be peeled (optional), and diced or sliced.

Cook them until they are just slightly under-done, but begining to be fork tender. This will depend on your type of potato. If you are using a waxy potato (such as a Red Bliss), you can cook them until they are fork tender as they hold their shape quite well; if you are using a starchy potato such as a Russet or Idaho, you want them just slightly resisting in the center.

After they are par-cooked, you may optionally refrigerate or even freeze them before finish cooking.

There are several methods which are effective for the par-cook, depending on your volume:

To finish cooking them, fry them on a hot griddle with generous butter (or other fat, to taste), salt, pepper, and other additions that you desire such as onions, peppers and so on until they are brown on all sides, and somewhat crispy. This will take about 5 minutes per side depending on your heat.

This is the method I personally use the most, as the results can be outstanding, although you need experience to judge exactly how they should come out. It is also only for reducing the cooking time, more than for pre-staging some of the preparation.

This method can be used for pre-preparation. The finish cooking takes longer, but is hands off.

This method will not give perfectly crispy potatoes like the first two methods, but is suitable for having a large quantity, as for a brunch party, ready for service at the same time.

The dense mushy patties labelled as hash browns in the freezer section does not speak to how a hash-brown should be, rather their unsuccessful attempt at making one.

The kind of crispy hash-browns that you're describing is similar to a Rösti but thinner. Chef Kenji has two recipes that can help you along in understanding what you need to during your preparation time and pick-up time.

In his Rosti method (with onions and all), he uses the microwave to accelerate the cooking of the potatoes.

Chef Kenji also broke down the art of making fries better than anyone in the public domain. In his perfect french fries method he explains how you can freeze the blanched and par-fried potatoes to help make them crispier (freeze dehydrate) during the final frying (pickup).

If you follow the fries process using grated potatoes (instead of the 1/4" fry-cut), you should arrive at a decent output. The modification I'd recommend in the case would to blanch them for a minute or two in boiling water instead of bringing to a boil. As SAJ14SAJ mentioned, the grated potatoes are fragile and take a lot less time to cook.

I'm not aware of any freezing techniques that are beneficial -- although you can buy them that way, the time required to thaw them slows you down more.

I do a home-fries style, and parcook the potatoes -- when I'm baking potatoes, I cook a few few extra, then let cool, wrap them in foil and stash in the fridge. I've held them for a week or more without problem, but Still Tasty recommends 3-5 days

When I want to make hash, I preheat a pan with a bit of oil, chop up the potato, and toss it in. I let it brown on one side while I chop up vegetables (onions and peppers, typically), then turn the potatoes over to crisp on a second side while the vegetables cook.

In my years of perfecting this technique, I've developed a few adaptations:

I'm not sure on the exact timing, because I've varied the stove temperature through the years to intentionally have it take the same time as my getting ready in the morning:

Optionally, you can crack an egg or two into it just before serving ... it gives the onion an extra minute or so to brown on the second side. (I kill the heat first; there's enough left in the pan if you're using cast iron ... also gives me enough time to put a tie on if it's a day w/ meetings)

This timing would likely not work unless you also live in an apartment or home where the bedroom, bathroom and kitchen are all near each other. (or you like running up and down stairs).

Melissa D'Arabian has a great recipe for Perfectly Crispy Potatoes that allows for you to partially make Home Fried ahead of time and finish them later. The potatoes are peeled, diced, and put into a med/high skillet with some oil, where they are stirred and fried for 5 mins. At the end of 5 mins., a couple of tablespoons of water is added and a lid is put on to let them steam for 3 minutes. It really makes the interiors fluffy. The lid is taken off the skillet and the potatoes are cooked until the bottom of the pan is dry for a minute or so (leave a little moisture if you are going to cook them later, because you don't want the potatoes to be too dry). Then a few tablespoons of butter or oil to the potatoes and mix them. At this point, you can either refrigerate the potatoes or finish cooking them by putting them onto a pre-heated cookie sheet at 375 - 400 degrees. Add a little more oil or butter if you think they need it for roasting. Roast the potatoes, stirring every 10 minutes, until desired degree of brownness (about 20 mins.) The par-frying, steaming, and further roasting makes for a crispy potato outside with a fluffy interior.

Not the answer you're looking for? Browse other questions tagged potatoes or ask your own question.

4
Can you parfry hash browns in advance?