Why do most sandwich makers have a triangular shape?

I've seen many hundreds of sandwich making machines in my life, and I noticed that in the vast majority of them, there is a diagonal protrusion that makes sandwiches come up in triangular shapes. 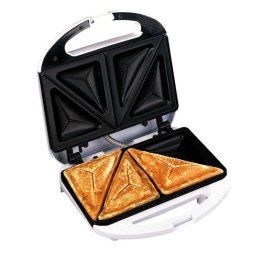 This makes no sense to me, for the following reasons:

Yet for some reason these sandwich makers are extremely common, to the point that flat makers are somewhat of a specialty item, therefore costing more.

I think I'm missing something here. Why do most sandwich makers use this triangular shape? What are the advantages of such a shape?

I strongly suspect but cannot prove that there are very few actual manufacturers of this niche appliance—perhaps even only one major one.

In particular, Konwin is a Chinese OEM (Original Equipment Manufacturer) that makes a series of sandwich makers for re-badging and resale.

You will note that their line of sandwich makers has the exact detailed design prevalent in almost every model for sale, right down to the little design in the center of the triangles. The various models in their line probably share many parts.

It is likely that many brands of sandwich maker are actually re-badged OEM versions, and so their similarity is because they really are the same machines, perhaps with minor aesthetic treatments or customization.

As to why the OEM chose the triangle design, I can only guess that it is for aesthetic reasons—to make the sandwiches look nice.

Typically with these sandwiches you have some cheese inside along with some other ingredients such as tomatoes that get quite hot (325° F sometimes).

From what I've seen, if you have a square only shape, you don't necessarily get a good seal, plus you get a massive pocket of hot lava. The fat from the cheese or butter concentrates in the center, soaks and can break through the bread releasing hot lava on shirts, pants, open toes, etc.

Even if it doesn't suffer a total failure, you don't get a consistent sandwich. Center will end up much soggier than the crusty rim and eating it can get difficult and messy. Certainly no longer hors d'oeuvres stuff.

The triangular shape essentially makes it bite-sized, so the stuffing doesn't run away after the first bite and becomes more manageable.

You can try using a grill or a panini press, but if you've noticed, those ones allow the oozing lava to escape and run away. A calzone is similar to what you'd get, and a badly crafted calzone can be quite messy and again, not really an hors d'oeuvre.

I think that there are several reasons.

Not the answer you're looking for? Browse other questions tagged equipment sandwich or ask your own question.

9
Why do "saute pans" have straight sides?
6
Why have all of my quality pans started smoking at once?
9
Why use a sandwich press instead of an oven or pan?
12
Why are most circular pizza peels designed with holes in metal