It was my first try to canning tomato sauce but I failed.

And I failed in my first experiment.

What should I be doing differently for this not to happen next time?

Jars burst either because of internal pressure or thermal shock.

There are a couple things you can do to reduce the risk of bursting.

Based on your description, if you had any of these problems I would suspect the last.
However, sometimes bottles just burst because of manufacturing defects. This doesn't happen often but it is sad when it does.

Your jar may have died of thermal shock. The bottom of your canning pot should have a spacer that keeps the jars from directly touching the pot's potentially quite hot bottom. You can buy purpose-built spacing grids, or use something like this: 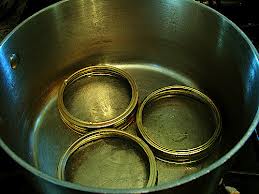 Those are canning jar lids in the bottom of the pot.

It seems that you added room temperature or (just warm) jars into boiling water, thermal shock broke the glass. Put room temperature closed jars in water, put cotton kitchen cloth between jars in the water, turn the gas on and continue. When the water starts boiling leave it boiling for 30 to 40 min. Turn off gas, leave them for one hour to cool and then take them out and dont open the jars. Store them in a relatively dark area, open only the one u need to use first. Basically speaking, jars with circular metal lids should have their top lid surface become slightly concave after boiling, this means the air went out and now they can be stored for a year. If the top of the lid remains straight or convex, there is a chance that the sauce will rot after a few weeks because air is still inside, and bacteria can resurrect to life.

Not the answer you're looking for? Browse other questions tagged sauce tomatoes canning or ask your own question.

10
Why are my canning lids popped out?
4
Canning tomato sauce
2
Tomato sauce - tomatoes, then juice vs tomatoes & juice
5
Why did my hollandaise sauce break when adding spices?
2
Canning lids twisting
2
Is this canning method safe to use for spaghetti sauce? (Boiling the sauce in the jars in the oven)
4
Broken pasta sauce
1
Elementary Tomato Canning
8
Jar pasta sauce resealed itself in fridge overnight. Is it safe to eat?
5
Canning tomato sauce for the refrigerator