Do fresh ramen noodles come in a curly form, or only instant?

Put another way, if I am served curly ramen noodles in a restaurant or for take-out, does that mean they are necessarily instant noodles? If there are fresh noodles that are curly, can someone provide a reference?

Here's a picture of what I mean. I don't eat instant ramen often, but they look as curly as instant noodles that I have eaten. Has this place served up instant ramen? 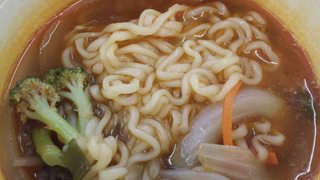 Picture from Wikipedia of which I am referring to as 'fresh ramen', distinct from the fried dried stuff coming in packages, which I don't think would cook up the same way: 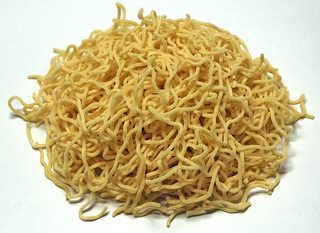 The short answer is yes, they can come in a curly form. There are several types of fresh noodle used in Rāmen, which can be classified mainly according to thickness and shape.

Noodles are classified in shape into the straight sutorēto-men (ストレート麺）, the curly chijire-men（縮れ面）, and the more rare flat hirauchi-men（平打ち麺） . With the exception of the flat type, these are further divided into several degrees of thickness: the extra thick gokubuto-men（極太麺）, the thick futo-men（太麺）, the middle thick chūbuto-men（中太麺）, the middle thin chūboso-men（中細麺）, the thin hoso-men（細麺）, and the extra thin gokuboso-men（極細麺）. The thin types are also further differentiated in the amount of water they have in their dough.

Which shape and thickness of noodle is used depends on the style of ramen and on the chef's preference. For example, hakata rāmen（博多ラーメン）, of the sorts served by Ippūdō in their Japanese stores, usually uses straight gokuboso type, but the same franchise uses chijire gokuboso type for their spicy rāmen and chijire gokubuto for their tsukemen. Likewise, yokohama tonkotsu-shōyu （横浜豚骨醤油）, also known as ie-kei（家系）, uses chijire-gokubuto.

The choice of noodle is related to many factors, but cooking time is an important one. In hakata rāmen, where the practice of topping up your noodles (kaedama／替え玉) is common, one has to be able to cook the noodle quickly, and hence the very thin noodle. Thicker types of noodle need longer cooking time (aprox. 10 min for gokubuto-men), and are only used by rāmen traditions that do not offer a noodle refill.

Another factor affecting the noodle type is the type of broth. Thicker broths ask for straight type of noodles, and thinner broths for curly noodles.

These are not rules etched in stone, however, as rāmen itself is a sort of creole food born from a mix of Japanese and Chinese cuisines. Some would say that there is not right or wrong in rāmen, and that anything is possible. However, what I have described above is what is customary and what you will find if you go to rāmen shops in Japan.

By the way, not all rāmen dishes in Japan use fresh noodles. There is a type of rāmen that originates from Chiba prefecture and is called takeoka rāmen（竹岡ラーメン）, which was originally cooked by part-timer old ladies hired from the neighbourhood, and uses dried (what you would call instant) noodles because they are easier to cook.

I once made an egg-based pasta recipe, meant to be spaghetti, which I didn't allow to dry to rest long enough. Texturally, the result was identical to ramen (even without the kansui, or bicarbonate solution) because the noodles were cooked so moist.

The pasta stayed pretty curly after cooking, most likely because it wasn't dried over a rack; it was just rested for a short time in flour-dusted clumps, the flour there to keep each noodle from sticking together. My wife, who has spent a pretty substantial amount of her life in ramen shops in Japan, was commenting that we seemed to have produced ramen with tomato sauce.

Real ramen noodles tend to cook fairly curly in my experience (but there are different types). Normally, they are made with water, flour, and kansui, and like my hurried pasta are typically dusted with flour and allowed to sit already slightly twisted together before cooking (you might have seen racks of ramen outside a shop in the movie Tampopo). I'm not sure what the root cause is, but I'm fairly confident that you won't be able to recognize instant ramen purely from the fact that it's curly when cooked.

The better indicator is probably oiliness. In "real" ramen, the broth tends to be super oily, typically from pork fat; the noodles are low in fat. In instant ramen, the noodles are very high in fat because of that pre-frying stage, and they can only fit so much fat in those little soup packets, so the soup itself is not that fatty. (Some ship with an extra flavored oil packet to get an appearance and aroma that Japanese, Korean and Chinese instant ramen customers want). If the noodles aren't overcooked and they are greasy, that's a better indication than the shape of the result. To me, the instant ones have a fairly distinctive smell, but I'm not sure everyone could recognize it. Additionally, well-made fresh ramen have a textural "bite" that's hard to describe but easy to recognize if you've had it.

The noodles in your first picture are white enough that I'm not sure there's any (or much) kansui in them. But I couldn't say conclusively whether they are instant or not from looking at them. I'd probably be able to tell from the texture if eating them. The lack of golden color suggest that they could just be a locally available fresh noodle but not actually ramen.

Dried Ramen is not the same as instant ramen. There are many types of dried Chinese noodles that look exactly like the instant noodles, but which are definitely not, none of which are called "ramen" in China.

Disregarding dried ramen noodles is like disregarding dried Italian pasta or dried Japanese somen noodles. The really curly Chinese noodles only come dry, there's no way to achieve the same tight curl and have it hold that tight after cooking unless its dried.

Dried noodles of a high quality that you would call ramen, are made only of wheat flour, water and salt, and nothing else. Some are made with whole wheat, some have other quality dried ingredients added for flavoring, but all of them take a much longer cooking time than instant noodles.

Really the only difference between normal dried Chinese curly noodles and dried Italian pasta is the type of flour and the thickness of the pasta. The dried Chinese noodles are much thinner and more flat than Italian flat noodles. Its thinner (less wide) than linguine and much more flat (less thickness).

Instant noodles also have a ton of weird ingredients you can't pronounce or can't figure out why they're in your Noodle. Its the difference between quality dried Jasmine rice or some instant rice that cooks in a minute. One is a very high quality food and one is complete inedible rubbish.

I, personally, can't even eat instant noodles because they taste exactly like cardboard to me. You can make the real version of ramen using quality dried Chinese curly noodles that come in individual round, square or rectangular cakes in a bag of 10-20 cakes. Then boiling that for some time, and making a separate quality broth with whatever additional things you want to eat with your ramen, straining and rinsing the noodles, resubmerging in boiling water then placing them into a bowl together with the broth.

In China, a great many extremely high quality food items are dried. Being dried doesn't mean being less than fresh, and many times dried is much more desirable than fresh for its special consistency and intense flavor. They're also the most expensive things you can buy in China, with a lot of things costing more than gold by weight. Dried Shitake and countless other Chinese mushrooms, dried vegetables of every kind, dried seaweed, dried scallops, dried shrimp, dried squid, dried fish, dried abalone, dried sea cucumber, dried mussels, dried clams, dried sea vegetables, dried limpets, dried pork, dried chicken, dried duck, dried beef, dried sausages, dried fruits, seeds, barks, dried rare medicines, medicinal plants, medical herbs, exotic ingredients like birds nest and silk worm, various rices, grains, legumes, literally everything. They ate like kings for thousands of years without refrigeration. They are the original source of noodles from Italy, and the rest of Asia as well.

I will guarantee you that a Chinese soup made with 100% dried ingredients, including dried Chinese noodles is better than any soup you could possibly make out of fresh ingredients, when given to the most advanced, refined, sensitive, developed and sophisticated palates on the planet to compare. Period.

I would say from your picture above, the noodles are probably the least of your worries. It just doesn't look like a good soup, mainly because of the broth and that onion & broccoli. But they're probably trying to make it to American tastes. Chinese cuisine has been ridiculed by Americans for so long they're accustomed to trying hard not to gross you out with complex & sophisticated flavors and ingredients, so they dumb it down to your level so you won't cry or complain, like you do for kids. Its the Chinese version of a peanut butter and jelly sandwich.

What you have in that bowl there is udon. Also, fresh ramen noodles can be bought at an Asian grocery - look for sun noodle or yamachan.

Ramen are a pre-cooked noodle. That is, they are usually deep fried (or less often, baked) before even being delivered to the home cook or restaurant that will serve them. You can even eat them straight out of the package if you want.

While straight ramen noodles do exist, most are curly.

So I am not sure what "instant" ramen means--by their very nature ramen are instant in that they are precooked, and only need to boil or simmer long enough to get soft and hot.

I would not read anything in to the fact that your restaurant is serving you curly looking ramen.

On the other hand, if they were making their broth from a little powder packet, I would be upset.

Not the answer you're looking for? Browse other questions tagged noodles ramen or ask your own question.

7
How can I make curly rāmen noodles from scratch?