Except for the different flavours, how similar is Mexican ceviche to the Japanese sashimi. Do they have the same basis and the same fish types?

Even with the same fish, sashimi and ceviche are very different dishes:

Sashimi is sliced, raw fish that is in its natural state. Note the glossy, translucent nature of the slices: 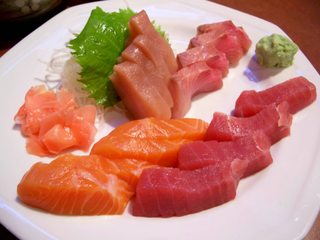 Sashimi is also just the fish, although the plate may have additional garnishes.

Ceviche is technically uncooked, but has been marinated in citrus juice which coagulates proteins and turns the flesh opaque in a manner similar to cooking. Ceviche is often combined with onions or other complimentary vegetables.

Note the opaque, white color of the flesh: 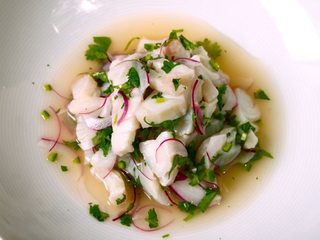 In terms of the fish used, sashimi is often made with oily fish like tuna, yellowtail, or snapper; ceviche is more often made from white fish, or even shrimp or squid. However, there is considerable variation in both cases.

Not the answer you're looking for? Browse other questions tagged sushi ceviche or ask your own question.

23
Can store bought salmon be used for sashimi?
6
What type of fish would be best suited for a trio pairing of sashimi, crudo and ceviche?
9
Sushi / sashimi knives
5
How long does ceviche keep?
9
Is it possible to determine if fish caught from fishing is safe to make into sashimi or sushi?
2
Pomegranate juice ceviche
0
Where to purchase sushi-grade ahi tuna in Arizona? (or purchase online overnight shipping)
3
What is missing in this recipe for Peruvian fish ceviche?
0
Using heat to cook (mock) ceviche