Normally, baking powder is preferred to yeast for making cake. I wanted to make simple light cake with yeast (using bread machine), but I face a problem that is not addressed in recipes (at least, I was unable to find).

Bread dough is much harder than cake, and yeast cannot rise such a soft dough. To make it capable of rising, I added extra flour to make the cake dough harder (but not as hard as bread dough). As a result, the dough did rise, but when I started to bake, the dough started to fall down.

My question is: How to adjust simple cake recipe to perfectly work with yeast instead of baking powder?

There a are a few recipes for baking cake in bread machine. However, I am interested to know how to adjust available recipes (which are numerous) to work with yeast.

And I wonder isn't it problematic to keep the cake dough at warm environment to make the yeast work? since it has milk, and this temperature can spoil the milk (can?).

This is not really an answer,

but rather a report on an experiment.

After the discussion here I got very curious and wanted to compare what I would call a "yeast cake" (even though this is against the traditional definition, but the texture is more or less that of a spongy cake/quick bread) to the "same" cake made with baking powder.

To perform the comparison I divided all ingredients in two and the only difference between them was the leavening.

I tried to keep it really simple, and threw together some ingredients that I had in the house (using a simple quick-bread/muffin method).

Just so you have the feeling of what the batter was like, I will add my experimental

For each cake I used:

For both I warmed up the milk and margarine just enough that it melted and added the vanilla, then let it cool down.

For A I then added the extra 2 tbsp of sugar and the yeast, and let the yeast get activated and work for an hour - the soy milk curdled and completely separated. When I made B I added the vinegar to the milk mixture and mixed - the soy milk got thicker and curdled a little. The baking powder and baking soda I added to the dry ingredients.

After waiting for an hour for A to do its thing (of course B was ready to put in the oven instantly), I poured the milk mixture into the combined dry ingredients and gently stirred, just enough for the components to combine. I poured the batters into oiled and floured pans and baked each cake on its own in a preheated oven for 40 minutes (this is when both passed the skewer test) at 350 F.

Both cakes rose to 2.5 times the batter height/level. However, B rose more evenly, whereas A rose a bit less towards the edge of the pan. B smelled like a normal cake/quick-bread, but A filled the house with a "doughnuty" smell (the most scientific term that can be used here would probably be: super yummy). When cooled and cut, both had a really (equally) nice bouncy, fluffy, slightly crumbly spongy texture. A had a bit more and larger trapped bubbles, see figures 1 and 2.

One of my taste testers (or is it test tasters) is quite sensitive to baking powder, and said B tasted a bit too much like baking powder. Everyone agreed that A tested a bit more complex. Both cakes would probably have been better with some nuts or chocolate or fruit, but I avoided these in order to have less complex experimental conditions, to make the cakes easier to compare. 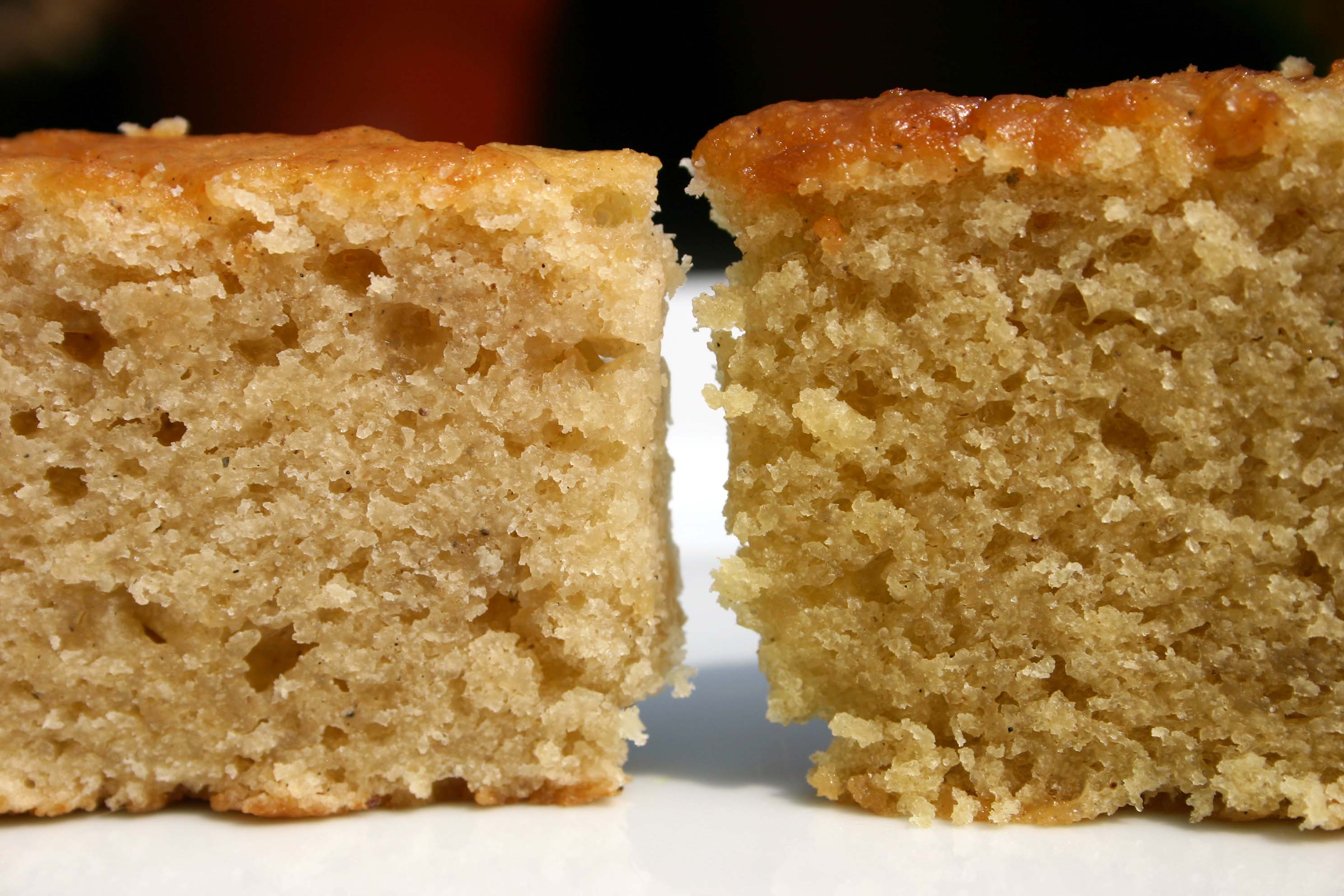 The experiment was performed using an electric oven as I don't have a bread machine. A comparison between this two would be interesting as well.

There is no reasonable way to do this. Yeast raised breads and cakes simply are very different types of product, with different requirements and chemistry.

See Why are there no recipes combining both yeast and baking powder? for details.

In summary, sponge cakes are defined by their tender crumb:

Yeast raised cakes (and some do exist), due to the long time period over which yeast acts to create the leavening by essentially inflating tiny gluten balloons:

Furthermore, the highly enriched nature of cakes (lots of sugar and fat) is counter-productive to both gluten development and yeast activity.

The two types of product simply are different enough that you cannot realistically convert one into the other.

Note: there are some cakes (usually coffee cakes) which are yeast raised, and you may find bread machine recipes for them; you may also find recipes that still use chemical leaveners rather than yeast but which are mixed and cooked in the bread machine. Try googling bread machine cake recipe.

Not the answer you're looking for? Browse other questions tagged cake yeast or ask your own question.

42
Why use yeast instead of baking powder?
15
What are the optimal conditions in making wild yeast starter?
5
What is the purpose of making a preferment for yeast doughs?
3
How to avoid collapse of yeast-raised dough?
4
yeast substitutes and proper measurements
6
Can you make bread with the yeast in beer?
1
Can I compensate for non-working yeast with baking powder in bread?
2
Baker's Ammonia with yeast—good idea?
2
Does leavened bread made with yeast require gluten to rise?
0
Strong Yeast Taste on Japanese Milk Bread